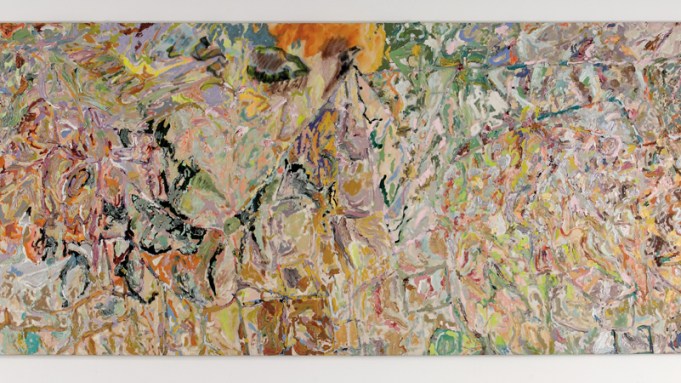 Larry Poons is the subject of a mini-retrospective in upstate New York at the Sam & Adele Golden Gallery. Befitting a pioneer of acrylic paint, the recently opened exhibition space is on the grounds of the Golden Artist Colors paint factory complex in New Berlin, major producers of handmade and custom-designed artists’ pigments. On view through Nov. 19, “Larry Poons: Velocity”—organized by Jim Walsh, with painter Paula DeLuccia, Poons’s wife—features seven large-scale acrylic-on-canvas paintings (up to 9-by-14 feet) from the years 1975 to 2009.

Poons’s career actually began a decade earlier, a period not represented in the show. It’s unconscionable that Poons has been overlooked for a major museum survey, a fact bemoaned by critic Karen Wilkin in this show’s catalogue. The Golden exhibition offers an enticing glimpse of what such a survey might look like.

For aficionados of abstract painting, Poons is a cult figure and a living legend. Agnes Martin taught him how to use acrylic paint in the early 1960s. Within a couple of years, while still in his 20s, he achieved international renown for abstract compositions featuring flickering dots, brilliantly colored hard-edge shapes set against grounds of contrasting hues. When the surfaces of these works are examined for any length of time, the forms act on the viewer’s retina in unexpected ways, appearing to pulsate or even skirt across the canvas, leaving ghostly afterimages as they flash or pop.

As critics, curators and collectors praised these optical games, they also started to categorize Poons, much to his dismay, as an Op artist. After producing fewer than 50 of these works in the early to mid 1960s, he moved away from the formula. His true passion was for color relationships and texture, and he eventually emerged as one of the leaders of the Color Field movement. In the late ’60s, he surprised and confounded some of his audience by producing a series of vast compositions made with layer upon layer of poured paint. Perhaps the thickest and most physically dense works being produced by anyone at the time, they feature unusual effects of intense color and novel textures, including passages of crackling or a crazing effect not unlike those in some ceramic glazes.

By the early 1970s, Poons began to throw buckets of acrylic paint in tall vertical skeins, like colorful waterfalls. The Golden exhibition begins at this point in his career, with a fine, untitled example from 1975. Covering the walls of his studio with a single roll of canvas, he painted mural-size works like this one in several sessions. Sometimes with the help of critic Clement Greenberg, one of his principal champions at the time, the artist isolated areas of the canvas with masking tape and cut them out into smaller compositions. The results are often ravishing.

In the 1980s, Poons started gluing bits of foam rubber to the raw canvases to slow the flow of pigment. The outlandish works that resulted, with inches-thick surfaces like impenetrable rock walls, appear to be near monochromes in muted earth tones. But the drama of the work is in the details. As you approach a huge painting like P.D. (1982), on view here, the surface comes alive with flickers of brightly hued underpainting that had been nearly obliterated.

Poons, who Patti Smith once referred to in New York magazine as “our cowboy Monet,” experimented with this technique for over a decade, producing many lushly sensuous works. Log Train (1985), for example, one of the most striking in the show, features undulating rivulets of cobalt blue and orange that meander through a complex topography of indeterminate, shifting color—sometimes pink, sometimes gray. The ambiguous surface is achieved by means of countless layers of pigment and richly modulated textures.

In more recent years, Poons has taken up brushes again. While the surfaces of allover compositions such as 20,000 Miles to Graham Parsons (2003), and Mocha Dick (2009) are relatively flat, they nevertheless appear as dense and hyperactive as the thrown- and poured-paint compositions. Most of these works suggest infinite landscapes, inspired as they are by the artist’s many cross-country motorcycle trips. Poons is consistently fixated on the forces of nature. His concerns are with gravity and the physical properties of matter, as in the transformation of liquid to solid, employing gallons of paint for this metaphorical aim.

Throughout his long career, Poons’s various changes in style and technique caused him to lose some followers but gain new ones. For those of us who have stayed for the whole ride, his work proves remarkably consistent. In general, each of his paintings could be described as an ambitious, sumptuous panorama that results from an exploration of visual perception. He pulls you into the picture, and then defies you to focus on any one area of the canvas. Everything appears in a constant state of flux.