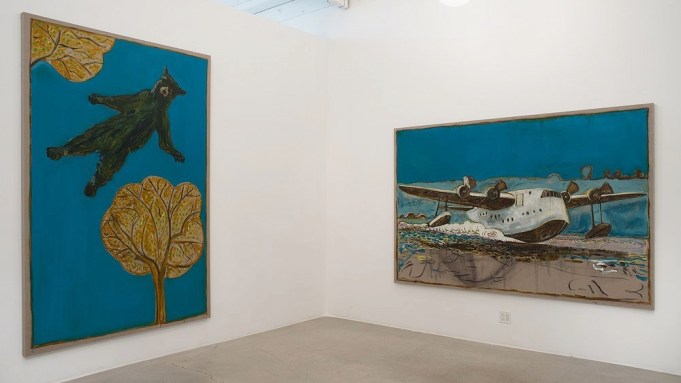 Franklin Sirmans is curator and head of the department of contemporary art at the Los Angeles County Museum of Art. He will curate Prospect.3, the New Orleans biennial, opening in fall 2014.

Here, he recalls his favorite 2013 exhibitions from the City of Angels.

Although he’s an English artist through and through and the works screams difference in Los Angeles in a way that it would not in New York or London, Childish is heavily influenced by another European who came to L.A. and, unlike Childish, stayed: Charles Bukowski. The rabble rousing poet is an apt foil here for paintings by the poet, painter and recording artist Childish whose paintings recall Van Gogh and Munch.

I didn’t want to include a show from my own institution but I would be remiss to not include this once-in-a-lifetime exhibition. Turrell’s explorations with light and space and perceptual phenomena are legendary and manage to walk steadily on that fine line between spectacle and artistic payoff. With objects and documentation, the full force of Turrell’s installations are made manifest.

Lari Pittman: “From a Late Western Impaerium” at Regen Projects

It’s a got a big title, suggestive of its keen focus on history and paintings that tackle the weight of the historical in the 21st century. This is the kind of show you do when you’ve been making art for a long time. Pittman’s cycle of three huge narrative paintings, supplemented by smaller paintings and works on paper, is a tour de force, exploring the personal, political and historical nature of art and life.

Forrest Bess at the Hammer Museum

Thanks in no small part to Robert Gober—who curated a solo section of the 2012 Whitney Biennial around Bess’s paintings and archival materials—we all became better acquainted with Forrest Bess in the last year. Bess (1911-1977), a self-described visionary, made small paintings in his own frames that touched on abstract and representational languages while conjuring a distinct and poetic style.

Having moved from their original location in a Lincoln Heights strip mall at the beginning of the year, Davida Nemeroff and Mieke Marple have set up their Night Gallery as a downtown destination, open with normal gallery hours. The summer show, “Culm,” was a mix of young and youngish L.A. artists, from those like Amanda Ross-Ho, who also had a great solo show this year, to Sean Townley, who just received his MFA in 2012. This is what Night Gallery has done best: zeroing in on the little underbelly that actually exists in L.A.