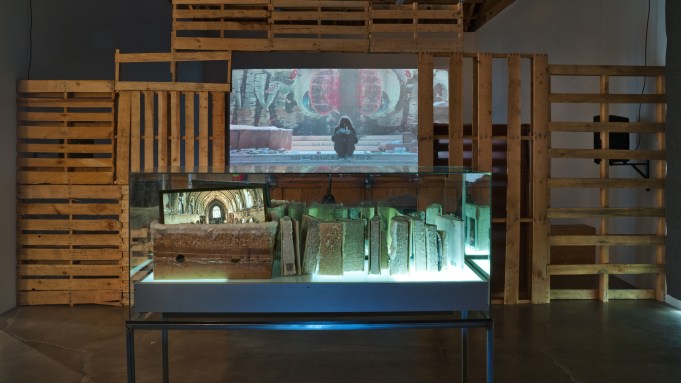 Connie Butler is the chief curator at the Hammer Museum in Los Angeles. With critic Michael Ned Holte, she co-curated the second “Made in L.A.” biennial this year.

Here, she recalls her top shows (and a performance) from 2014 in the City of Angels.

I am taking liberties by starting off the 2014 year in late 2013, but the fact of this show in Los Angeles, Sturtevant’s first in decades, was an important lead-up to her retrospective at New York’s Museum of Modern Art and a significant marker in her return to visibility in the U.S. Given her death prior to the opening of the MoMA show, this generous presentation of the film Finite Infinite (2010) underscored the importance of that space for bringing projects that would otherwise not be seen or given such gorgeous and ample space. A generic found image of a dog running endlessly across the horizon and across four seamless projections, this film was an arresting example of why Sturtevant was the renegade, conceptual appropriationist that she was. She was an iconoclast-feminist, philosopher and master of the mediated image.

Liz Larner has been producing enigmatic, sculptural objects since the mid-1980s but is arguably hitting a magnificent new stride with her current ceramic pieces. With each body of work she reaches new heights and depths. This recent show continued her explorations in clay—strange and polychromed tongues of porcelain—odes to the body in all its deformations and transformations. The tour de force was an aluminum sculpture that appeared to have landed from outer space; it was equally spindly, delicate and strange.

One of the most intriguing artists to have recently relocated to Los Angeles, Samara Golden makes claustrophobic, obsessive and hallucinatory installations that appear to have materialized from a dream. Conjured from her restless brain, these silvery sculptural objects are both covetable and repulsive. Given the considerable space of Night Gallery, Golden was able to both stretch out and get spare with her choices of furniture and domestic objects, a mashup of saccharine L.A. sunsets and Liberace-inspired vignettes.

Mike Kelley at the Museum of Contemporary Art

What Mike Kelley was to Los Angeles is rather distinct from what he was to the international art community. Here, his retrospective, elegantly curated by Ann Goldstein (at the time director of Amsterdam’s Stedelijk Museum) and generously augmented and installed by MOCA’s own Bennett Simpson, was elegiac but still raw and challenging. Having come home to rest after iterations at the Stedelijk and New York’s MoMA PS1 (and a smaller version at Paris’s Centre Pompidou), the exhibition was sprawling and explosive, showing off the grand Geffen Contemporary spaces, which looked better than they had in years. Kelley’s influence on generations of artists and on his contemporaries was felt everywhere in the exhibition. The exhibition left you feeling wrenched that there won’t be more from this great artist, but inspired that there’s still so much to understand.

Math Bass, “Lies Inside,” at Overduin and Kite

I don’t really understand Math Bass’s paintings and I’m not completely sure I like them. But they are very much of this moment and I can’t get them out of my head. Where painting is and where it is going is always a question, but I’m sure that these mute, hybrid, still works are genetically engineered to persist.

Yvonne Rainer, “The Concept of Dust, or How do you look when there’s nothing left to move?,” performance in conjunction with “Yvonne Rainer: Dances and Film” at the Getty

Watching Yvonne Rainer—among our most treasured creators of the last 50 years—unfold her latest and one of her greatest works was beyond memorable. Rainer as a mover and choreographer, activist and philosopher of the human spirit, commanded the stage in a work that was about everything—not only the clichés of life and death, which in her hands are touching and resonant, but also ISIS, the banking crisis and the terrible events in Ferguson, Mo., were all there. Rainer wrestled with those topics even as she doled out riffs on her own mortality.

“From All Sides: Tansaekhwa on Abstraction” at Blum and Poe

Blum and Poe Gallery has long mined Japan’s post-war art history; here, the gallery turned its attention to Korea with a show that surveyed monochromatic painting from the ’60s to the ’80s. Curated by art historian Joan Kee, “From All Sides” highlighted artists who are largely unknown in the U.S., with the exception of Park Seobo and Lee Ufan; the latter artist’s work has frequently appeared in international biennials and was the subject of a major retrospective at New York’s Guggenheim Museum last year. For me, an unabashed fan of the monochrome, the show was full of quiet discoveries, especially the somber but shimmering work of Yun Hyongkeun and the gestural, cut and scrapped canvases of Chung Sang-hwa. It’s always such a pleasure to learn, as we do again and again, that there is so much art history we don’t know.

For Arceneaux, this project represented the culmination of years of research into little-known narratives from the life of Martin Luther King, including his last speech, “Beyond Vietnam,” and his not surprisingly fraught relationship with the FBI. It was also a tour de force for the artist, whose work previously has largely occupied the territory of drawing installations, with sculpture as a secondary part of his production. This show boasted both materially ambitious and conceptually rigorous objects and video that together conjured an atmosphere of another time, a time of altered and redacted history with eerie parallels to the present moment.

Pierre Huyghe at the Los Angeles County Museum of Art

Pierre Huyghe nearly stole the show at the last Documenta with the dystopian, outdoor installation that culminated (if that’s even the right word) with the visitor coming upon a large, figurative sculpture of a reclining, nude woman whose head was alive with a swarm of bees. The same sculpture is here, as is the very thin, very white dog with the painted-pink leg who wanders through the films and other sculptural elements, seemingly both watchful and completely bored with the whole affair. In Huyghe’s newest film, a small monkey wears the mask of an Asian girl and moves through what appears to be a Japanese tea house. Haunting and deeply moving, this film, as with all of Huyghe’s works on display, touches on nothing less than the human condition. I found myself thinking in superlatives as I wandered through his imaginary of 21st-century memory, slowness and oblivion.

Trevor Noah to James Corden After ‘Daily Show’ Exit: ‘Everything Comes to an End’

The Most Stylish iPhone Wallet Cases Bring Together Form and Function