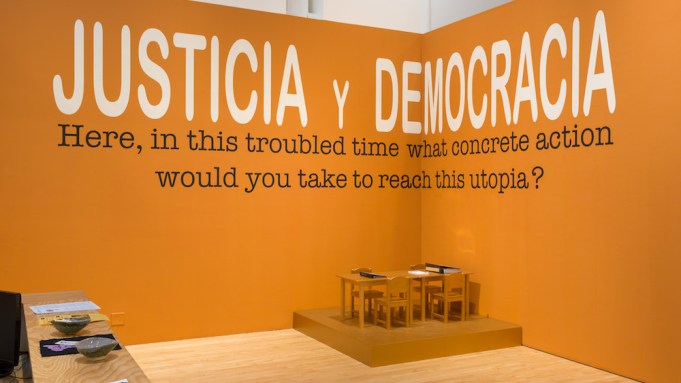 “Here, in this troubled time, what concrete action would you take to reach this utopia?” The question confronts viewers at the entrance to “Below the Underground: Renegade Art and Action in 1990s Mexico.” Posed by Pinto Mi Raya in the project Justice and Democracy (1995/2016/2017), the query hovers above a golden-hued seating area on a platform. This spatial context codes the question as an incisive provocation: what physical acts are you willing to undertake in order to access possible alternative futures?

Twenty-two years after its initial iteration, the work might read as an indictment of contemporary art’s political pantomime. Pinto Mi Raya (“I paint my line”) is a collaboration between Mónica Mayer and Victor Lerma that remaps the privileged terms of artistic discourse by assembling alternative archives. Founded in Mexico City in 1989, the collaboration has generated an artist-run gallery, television and radio programs, and an archive of art criticism in Mexico that comprises roughly 300,000 documents. The duo pursues methods for the collective production of knowledge, specifically those that unsettle canonical structures to “lubricate the art system,” as they often say. In Justice and Democracy, they extend collective authorship, alongside accountability, to the viewer: how will you contribute to new forms of world-making? Viewers are invited to reply while seated at the workstation in miniature chairs that bring them low to the ground. The responses, collected in a binder, include teaching and learning; organizing a self-sufficient artists’ commune in Pasadena; punching a Nazi; and setting fire to the couple form and the detached single-family dwelling (as conveyed by an allegorical illustration).

The question of political action is taken up by three remarkable large-scale shows mounted through the Getty Foundation’s Pacific Standard Time: LA/LA. “Below the Underground,” “Talking to Action: Art, Pedagogy, and Activism in the Americas,” and “Axis Mundo: Queer Networks in Chicano L.A.” all showcase heterogeneous tactics for aesthetic and political organizing through dialogical exchange, pedagogical intervention, and embodied acts of resistance.

“Below the Underground” at the Armory Center for the Arts in Pasadena gathers twenty-six artists and collectives active in Mexico City, Guadalajara, and Monterrey in the 1990s. A digital archive accompanies the show, framed as a virtual “social space” that extends the aims of the historical spaces on display. The exhibition focuses on “radically local” practices, a phrase used by curator Irene Tsatsos to denote modes of working that bypass the international art world’s distribution mechanisms. Documentation of street performances and reconstructed temporary monuments comingle with zine libraries and recordings of pirate radio.

In the first-floor gallery, Ema Villanueva’s Pasionaria, walking for dignity (2000) documents an ephemeral street performance staged one year after the violent suppression of student protest at the Universidad Nacional Autónoma de México (UNAM). The work is attributed to the collective EDEMA, a collaboration between Villanueva and Eduardo Flores. An iconic figure of live art, Villanueva is known for using her body to intervene into public space.

For Pasionaria, Villanueva donned a bikini and pumps, painted her skin in colors associated with the 1999 UNAM student strike, and walked five miles to the university. Along the way, she allowed bystanders to paint their sentiments about the 1999 strike on her skin. She offered her body as a surface for inscribing the articulation of protest, making it a site for assembling the knowledge of a social body that refuses to be regulated.

These thematics also inflect “Talking to Action: Art, Pedagogy, and Activism in the Americas” at the Otis College of Art and Design’s Ben Maltz Gallery. The exhibition draws its theoretical scaffolding from Brazilian philosopher Paulo Freire, offering potent examples in support of his claims that dialogical forms can serve as agents of decolonization.

Archival materials abound throughout the show, alongside sculptures that range from a fiberglass mannequin by Alfadir Luna to piñatas collectively produced by Dignicraft and Purépecha artisans. Giacomo Castagnola’s exhibition design dislocates works from the gallery walls to orchestrate intimate engagements with the materials. At the entrance, Estructura Vertical de Alambrería (2017) houses the unbound pages of a gallery guide that viewers must assemble themselves, as an initiation of sorts into the exhibition’s orientation toward the participatory construction of knowledge.

This ethos threads throughout the show, manifesting in libraries, diagrams, and mapping exercises. The latter appear in the output of Iconoclasistas, an Argentine duo comprising graphic artist Pablo Ares and educator Julia Risler that formed in 2006. The 2013 manual, Collective Mapping in Two Stages: Tools for medium-sized gatherings with the aim of bringing together and presenting shared information and knowledge, outlines their methods for peer-to-peer knowledge distribution in a series of inkjet-on-paper storyboard panels. They focus on collective cartography, the process of visualizing research on occupied territories through collaborative mapmaking. Iconoclasistas works by extending cartographic tools to nonspecialists, for instance, a set of visual icons and symbols corresponding to issues like toxic spraying, land conflicts, and real estate speculation. One example, Mega-mining in the Dry Andes (2010), shows how multinational corporations extract resources from the Andes while laying waste to its ecologies and endangering local residents.

Nearby, Ultra-red and School of Echoes present Los Angeles Library for Anti-Gentrification (2012–17), another collaboratively generated discursive intervention. Formed in 1994 by Dont Rhine and Marco Larsen, Ultra-red is a collective whose methodology centers on community listening sessions where shared aural experience serves as a catalyst for collective action.  Also drawing influence from Freire, Ultra-red emphasizes attention to one’s interlocutors as a precondition of dialogue and critical pedagogy. Their library catalogues the traces of these dialogic processes in booklets and a set of videos looping on two adjoining monitors. The bilingual collection examines the displacement of communities of color from Los Angeles neighborhoods, and was produced in active dialogue with residents of affected areas. Attendees are encouraged to take Los Angeles Tenants Union informational pamphlets, documentation of anti-displacement marches, and other publications from the stacks. Projects like these insist on pedagogy as a public, collective undertaking, to be performed alongside members of one’s community rather than by individual artist-explicators working in isolation.

Collaborative production that unfolds among a circle of intimates is also the focus of the groundbreaking “Axis Mundo: Queer Networks in Chicano L.A.” at the Museum of Contemporary Art’s Pacific Design Center and One Archives in West Hollywood. The exhibition presents occluded histories of queer kinship and aesthetic affinity among Chicanx practitioners in Southern California. “Axis Mundo” reaches the furthest back of the three exhibitions; its timeline spans the late 1960s to the 1990s, a period demarcated by the Chicano Rights Movement on the one end and the AIDS crisis on the other.

The exhibition is divided into a series of thematic sections. Among these, “LA/LA/LACE” showcases work produced in the context of the community art space Los Angeles Contemporary Exhibitions; “AIDS Activism(s)” examines the politicization of aesthetics within queer communities confronting the AIDS epidemic; and “Chicano Chic” considers how “self-fashioning intersected with activist sloganeering” in the work of figures like Judith Baca. Here, photographic documentation of Baca’s 1976 performance Vanity Table shows the artist coiffing herself into “La Pachuca,” a 1940s Chicanx countercultural figure whose resistant identity is telegraphed via zoot suits. Throughout the exhibition, various artists’ photographic portraits of one another are reproduced as colossally scaled murals, foregrounding kinship networks as fertile ground for art-making.

Like “Below the Underground” and “Talking to Action,” “Axis Mundo” prominently emphasizes how the circulation of printed matter shaped art and activism. Zines like Joey Terrill’s Homeboy Beautiful (1978) and Vaginal Davis’s ¡Cholita! Slambook (1990) appear in glass vitrines, alongside a set of paper dolls inspired by Chicana lesbian activist Jeanne Córdova and made by Phranc—a folk singer and “cardboard cobbler”—as well as flyers advertising performances by queer punk band Nervous Gender. Through displays of archival, photocopied ephemera assembled with palpable care, “Axis Mundo” shares with the other exhibitions a focus on para-institutional publishing as a means of intimate knowledge production.

Jack Vargas’s poem The New Bourgeois “I Want” With Gay Male Suggestiveness (1976–79)—originally published as a 27-page photocopied document that was distributed directly to the author’s friends—is excerpted in a large-scale wall piece. Like the photographic murals that punctuate the exhibition design, this magnification of scale accords outsize visibility to a figure whose legacy has been minimized in prevailing art-historical narratives.

Vargas, who also used the pseudonym Le Club for Boys, was a 1976 alumnus of Otis and a central protagonist within the networks spotlighted in “Axis Mundo.” His work was created in queer countercultural milieus that also included Terrill, Teddy Sandoval, and Nervous Gender co-founder Gerardo Velázquez.  Speaking to and from this context, Vargas’s The New Bourgeois inventories the intersections of queerness, race, and class. Vargas writes, “I want a well-hung guy. / I want to be well-hung,” “I want to go to a private girl’s finishing school . . . I want to be a Vassarette,” “I want blonde hair and a tan.” Placing the transgressive desire to “cruise the bathrooms at State” beside longing to attain the normativity of a well-heeled Vassar student, Vargas articulates a textual identity whose constituent parts are irreducible to a simplified schema. Single-fold leaflets with excerpts from the poem are stacked on the floor and viewers are invited to take a copy—a gesture that temporarily extends an intimacy to the viewer that was initially reserved only for Vargas’s coterie. In the process, it simultaneously extends the circulation of a crucial document of queer Chicanx poetics. The leaflet’s penultimate lines are “I want to pal around with models / I want a model,” playing on the double meaning of model as both an ideal specimen and the prototype for a structure that has not yet been built. They code Vargas’s document as the blueprint for a queer futurity that might yet arrive through discrete articulations of resistant desire.  While the goals Vargas lists are largely fantastic, much like the diagrams, charts, and documents in “Below the Underground” and “Talking to Action,” they nevertheless suggest a panoply of replies to the question “what concrete action would you take?” and the possibility of alternate worlds.