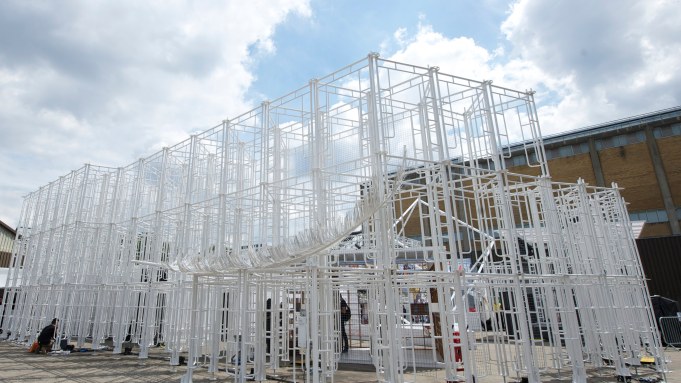 After previous stops in Beijing and London, something vaguely reminiscent of the 2001 monolith arrives in New York this week, prompting unsettling questions about the best relationship between government and the arts.

Singapore: Inside Out, taking place Sept. 23-27 in a towering scaffold structure at New York’s Madison Square Park, is a showcase of Singaporean visual arts, music, fashion, design, film and drama. The spectacle is accompanied by collateral activities at selected restaurants, the Bergdorf Goodman department store and the LAVO nightclub. It will even be graced, on Sept. 24, with an appearance by His Excellency, Ashok Mirpuri, Singapore Ambassador to the United States.

Clearly, the New York event is part of an official global push to promote cultural production in Singapore (where tourism is a major industry) on the occasion of the island state’s 50th anniversary of full independence from Great Britain. But it is also an implicit endorsement of a paternalistic governmental approach to arts management that contrasts dramatically with America’s individualistic, market-dominated artistic melee.

Consider just one set of figures. According to Grantmakers in the Arts, total governmental arts spending in the U.S. last year (federal, state and local) was $1.23 billion, or $3.84 per capita. In Singapore, with a population of just 5.5 million, the outlay by the Ministry of Culture, Community and Youth (with a somewhat wider brief that includes amateur sports) was $480 million, or $87 per person—over 22 times the U.S. rate. The terms of comparison are imperfect but the fundamental contrast is unmistakable.

In Singapore, virtually all arts organizations, from prestigious national institutions to tiny alternative spaces like the Substation, get their lion’s share of funding from the government, supplemented to a much smaller degree by corporate and personal donations. Individual artists tell similar stories of a productive life made possible largely by a reliable system of rent subsidies, grants and teaching opportunities.

The answer is, first, that Singaporean society is more liberal than such stereotypes suggest (gambling and prostitution, though controlled, are both legal) and, second, that artists in Singapore face essentially the same restrictions as their peers in China, where concern with social “harmony” is also paramount. Depictions of sex are problematic, and blatant slurs (personal or ethnic) or direct, specific criticism of government officials (as opposed to broader social problems) might cause an artist’s work to be removed from exhibition and/or engender future funding woes.

To understand the present policy, we must recall that the Cambridge-educated Lee Kuan Yew (1923-2015) ruled Singapore as a kind of benign dictator (under various elected and appointed titles) from 1959 to 2011, and his People’s Action Party continues to hold an overwhelming parliamentary majority to this day. Lee’s primary goal was economic development, expressed as taking Singapore—located off the southeastern extreme of the Asian landmass, bordered by Indonesian and Malaysia, and sovereign over 62 smaller nearby islands—from the Third World to the First World in one generation. Today, international indexes of GDP, per capita income, foreign investment, literacy, housing, safety, health care, life expectancy, urban greenery and—surprisingly—governmental non-corruption attest that he did precisely that. Next on the agenda for this Asian tiger economy is culture-a natural progression in this part of the world.

Or, more accurately, cultures. Despite its tiny size, Singapore is remarkably diverse, with a populace that is roughly 74 percent Chinese, 13 percent Malay, 9 percent Indian and 4 percent other. Five major religions are practiced (Buddhism, Christianity, Islam, Taoism and Hinduism), and 39 percent of residents are foreign-born.

This leads to some startling juxtapositions of languages, customs, traditions, architecture and cuisines. (Singapore is a city much devoted to dining, from high-end cosmopolitan restaurants to innumerable local eateries and food stalls offering specialties such as laksa.) When I visited two weeks ago, the metropolis’s futuristic office towers were obscured for days on end by a pall of smoke that had drifted in from Sumatra, where forests were being burned to make way for agriculture. This, however, did not deter well-dressed office workers from descending on their lunch hour to incinerate fake money in sidewalk burners to appease spirits temporarily released from the underworld during the annual month-long Hungry Ghosts Festival, marked also by neighborhood stage productions and constant chanting at the Buddha Tooth Relic Temple. World business and financial institutions frequently find their architectural plans altered by the dictates of a feng shui master or their opening delayed until a date composed of suitably auspicious numbers.

Several key art institutions in Singapore have taken up the challenge of honoring this rich cultural mix. The $380-million National Gallery Singapore, slated to open Nov. 24 in a newly conjoined structure linking the former City Hall and Supreme Court buildings, boasts an 8,000-work collection comprising modern works from Singapore and elsewhere in Southeast Asia. The shared sequence from colonial-era stirrings of interest in Western art to a long struggle between social documentation and abstraction to the verge of contemporary pluralism—featuring artists as diverse as the Matisse-influenced Liu Kang (1911-2004), the social realistic Chua Mia Tee (b. 1931) and the formalist Redza Piyadasa (1939-2007)—is familiar to observers of Asian art but well worth permanently documenting. (Indeed, what would be the point of a modernist museum in Singapore that did not tell the regional story?)

The Singapore Art Museum (SAM), founded in 1996, will now turn its attention exclusively to contemporary art. The current exhibition “After Utopia: Revisiting the Ideal in Asian Contemporary Art” (through Oct. 18) brings together 20 individual artists and teams to address a theme of obvious relevance to Singapore. Participants include Vietnam’s Propeller Group, whose 2011-12 video contribution, a mock consumerist-style TV ad campaign for the New Communism, is familiar to viewers of the 2012 “The Ungovernables” triennial at New York’s New Museum. Indian artist Jitish Kallat, who curated the critically esteemed 2014 Kochi-Muziris Biennale, offers Annexation (2009), shaped like a giant kerosene stove and festooned with plants and animals locked in a mutually consuming struggle for survival—all drawn from the friezes of Mumbai’s busiest train station, an architectural icon of the British Raj. China’s Shen Shaomin presents ironically “lifelike” figures of dead and dying Communist heroes (Stalin, Mao, Castro, etc.) lying in state. Made Wianta, from Indonesia, has twisted motorbike mufflers and tailpipes into a soaring tangle called Air Pollution (2014). A video monitor shows scenes of refugee-camp survivor Svay Sareth, pulling a huge metal sphere on a six-day journey from his home village to Phnom Penh, site of the horrific 1970s Khmer Rouge purges; the battered ball with its human yoke rests nearby.

Concurrently on view at SAM is the annual “President’s Young Talents” exhibition (through Mar. 27, 2016), whose five Singaporean honorees include Ezzam Rahman, who has made flowers from scraping of his own skin, and Loo Zihan, who has created an interactive reading room from which art books can be borrowed by visitors who lend other volumes that they themselves own.

CCA is located slightly outside the city center, in the Gillman Barracks complex of about a dozen commercial galleries. While dealers there have seen only moderate traffic and sales since the government-backed conversion of the former military compound in 2012, they continue to put on thoughtful, handsomely mounted shows in pristine facilities. Among the current highlights are Chinese artists Cang Xin and Pan Jian at Pearl Lam (through Sept. 27) and Sun Xun at ShanghART (through Oct. 4). Meanwhile, independent curator June Yap, who organized “No Country: Contemporary Art for South and Southeast Asia” at the Guggenheim Museum in New York in 2013, has assembled “Dear Painter,” a thematic exhibition of commissioned works by nine Singaporean artists at Sundaram Tagore (through Oct. 25).

All these day-to-day art activities are the foundation for special events such as the Singapore International Festival of Arts, the Singapore Biennale and Art Stage Singapore (an art fair—with accompanying Art Week—devoted to work from the Middle East, North Africa, and South and Southeast Asia).

The country’s confidence in its own social and aesthetic vision is perhaps best expressed by Jeffrey Ho, executive director of the Design Singapore Council (headquartered in the National Design Centre, a think tank, funding agency and exhibition space currently showing—what else?—”Fifty Years of Singapore Design”). The organization has a plan, he told me, detailing how the entire world population could be housed with a decent standard of work and living in “one thousand Singapores.”

New York visitors to Singapore: Inside Out can begin to assess how they might feel about such a prospect by checking out the wry biological investigations of Robert Zhao Renhui (who in addition will parley with fellow artist Jason Wee and curator Joan Young at the Guggenheim on Sept. 25), a durational performance by Jason Lim, the sound manipulations of Zul Mahmod, the mind-teasing work of the satiric Vertical Submarine trio and the culturally synthetic ceramic designs of Edwin Low.

A bit later, viewers will also have the chance to consider the contributions of Singaporean artists Ho Tzu Nyen and Donna Ong to “inToAsia: Time-based Art Festival 2015” at the Queens Museum (Oct. 3-31).