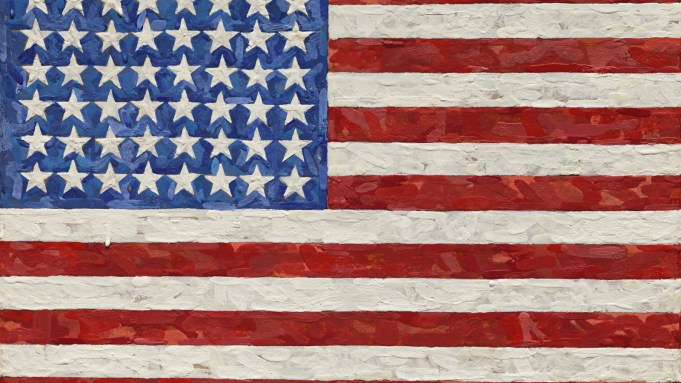 Notwithstanding a sometimes subdued atmosphere in the sales room, auction records were set for Jasper Johns ($36 million), Robert Ryman ($15 million), Jean Dubuffet ($7.4 million) and Glenn Ligon ($4 million), whose painting Untitled (I Was Somebody), the first work offered, got the sale off to a strong early start.

“The sale was a bit spotty,” New York private dealer Andrea Crane told A.i.A. after the sale. “The estimates were very aggressive.”

Others suggested that the climb in prices for contemporary art seen in recent years may be unsustainable.

“Estimates were about 10 to 15 percent too high,” New York consultant Todd Levin, director of the Levin Art Group, told A.i.A. “We are reaching an event horizon, beyond which estimates cannot go without causing imminent failure of the sales. They’re really playing a dangerous game.”

New York dealer Nicholas Maclean, a Christie’s veteran, was more sanguine. “The sale did fine. There were one or two disappointments, but overall the big things did well, actually.” Maclean was seen bidding on pieces by Warhol, Lee Ufan and Christopher Wool.

Jeff Koons works were among the disappointments. Despite his coming off a museum-wide retrospective at New York’s Whitney Museum of American Art, his shiny sculpture Moon (Yellow) climbed to $11.5 million but failed to sell. His kitschy sculpture Bear and Policeman hammered at its low estimate of $7 million.

The top lot, Rothko’s canvas No. 21 (Red, Brown, Black and Orange), 1951, was estimated to bring upwards of $50 million, and sold for $45 million after 4½ minutes to an unnamed buyer bidding by phone via Sotheby’s contemporary art specialist Scott Nussbaum. Featuring the artist’s trademark floating rectangles in red and pink, the 8-foot-high canvas has been off the market since 1988, when it was bought by collectors Pierre and São Schlumberger. Pierre Schlumberger was heir to a logging fortune, and he and his wife were major benefactors of the arts.

The night’s second-highest price was for Jasper Johns’s 1983 Flag, which has been with the same owner since he bought it straight from the artist’s studio (the catalogue designates it “property of a gentleman”). Executed in encaustic on a flag mounted on canvas, the work was estimated at $15-20 million and inspired a six-minute contest among several bidders, besting the artist’s previous record after about two minutes. It sold to a phone bidder via Scott Nussbaum.

Andy Warhol’s Liz #3 [Early Colored Liz], a characteristically colorful portrait of Elizabeth Taylor in front of a green ground, from 1963, was tagged at $30 million, and fetched $31.5 million, the night’s third-highest price.

“Warhol is considered a bellwether, and accounts for a lot of activity in the market,” Levin said. “For the Liz, $30 million sounds big, but then his Little Electric Chair failed to sell.” The latter was estimated at up to $9.5 million, but bidding stopped at $6.8 million.

An untitled Robert Ryman all-white canvas from 1961 brought its low estimate of $15 million, easily besting the artist’s previous auction record of $9.6 million. It had sold at Sotheby’s New York in 1988 for $550,000. The 4-foot-square painting dates from just six years after the artist began to paint. New York art consultant Josh Baer has reported that the canvas sold to New York dealer Dominique Lévy.

New York contemporary art sales continue tomorrow. Christie’s forecasts that its sale, including two Warhols expected to bring as much as $50 million apiece, may bring as much as $738 million, which would dwarf tonight’s take. That total, if achieved, would come just shy of Christie’s $745-million sale in May of this year. Sotheby’s did, however, dominate the Impressionist and modern art sales last week, bringing in $422 million, its highest auction total in any category, led by a $100-million Giacometti sculpture. Last night, the house held a $159-million sale of works from the collection of reclusive philanthropist Bunny Mellon, well over its $120-million high estimate, and with every work offered finding a buyer.

A Robert Ryman canvas priced at $7 million is the biggest ticket at Phillips, which hopes to bring in as much as $68 million in its evening contemporary auction on Thursday.

How Trump Got Trolled By a Couple of Fascists