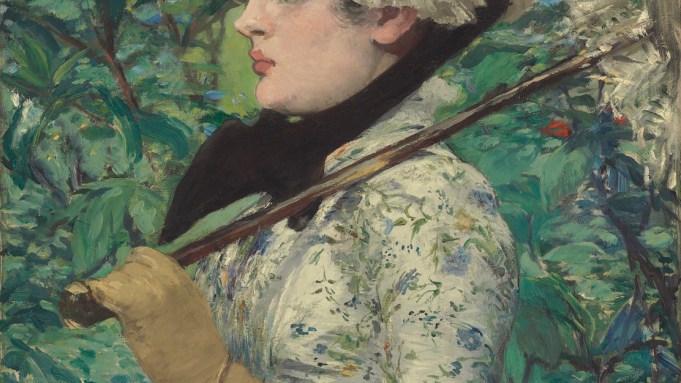 On her way out of the salesroom, New York dealer Dominique Lévy pronounced the sale “tame but good, very consistent.”

The total edged by the house’s $157-million pre-sale high estimate, and with just 39 works on offer at its Rockefeller Center salesroom, the sale was tightly edited and mercifully short, wrapping up after just 75 minutes. Half the pieces offered sold above their high estimates, and 90 percent of works found buyers. The sale improved slightly over last year’s $144.3-million auction.

Christie’s followed a larger sale at Sotheby’s the previous night, which brought $422 million, the house’s highest-grossing sale in any category.

The Manet, Spring (1881), a 30-inch-high canvas, was tagged at up to $35 million. The painting has been off the market, residing with an unnamed family, since 1909. Painted just two years before the artist’s death, the same year as The Bar at the Folies-Bergères, this canvas depicts actress Jeanne Demarsy, then in her teens, as an allegory of spring, in a floral-print dress in front of tall, flowering shrubbery.

Auctioneer Andreas Rumbler egged on potential bidders by pointing out that it was the last painting remaining in private hands that Manet exhibited at the Salon. It gave rise to a contest lasting nearly seven and a half minutes, almost exclusively conducted by phone bidders. The winner, seated in the front row, was New York dealer Otto Naumann, Josh Baer has reported.

“That was exciting—the night’s only real bidding war,” Lévy said.

Sounding the night’s one real sour note was Fernand Léger’s Builders with Tree (1949-50), which failed to sell, falling short of its $16-million low estimate. A distinguished provenance couldn’t save the painting, which has passed through the collections of legendary French art dealer Daniel-Henry Kahnweiler, the Sara Lee desserts company and casino magnate Steve Wynn. At 4½ feet wide, it shows four construction workers perched on the girders of a building in progress. Having recently joined the Communist Party, the artist created the painting as a tribute to the working man.

Rumbler waited around for nearly three minutes but the painting was not to be saved.

“That was embarrassing,” Nash told A.i.A. “The problem wasn’t the quality, it was just that it carried a guaranteed minimum price and so they ended up floundering around for bidders.”

The night’s second-highest price was fetched by Alberto Giacometti’s Stele III, a bronze sculpture with the bust of his brother Diego atop a column. It brought $9.9 million, well above its $6.5-million high estimate. While a happy result, it represented less than 10 percent of the $100-million ticket for a sculpture by the artist sold at Sotheby’s on Tuesday. Christie’s Giacometti was followed by Joan Miro’s Tuilerie a Mont-roig, a 1918 landscape about three feet wide. It was bought for $8.7 million, just above its $8-million high estimate, to place as the night’s third-highest price.