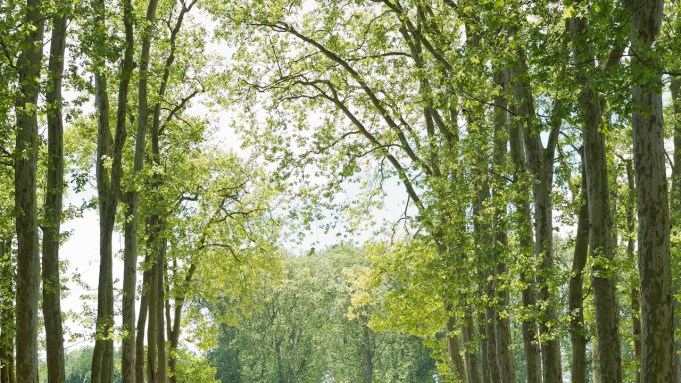 Only in France, perhaps, could a Sunday outing entail an exercise in visual philosophy—one combining formal rigor with a whiff of historical decadence. But that’s exactly what’s on offer now at the royal palace of Versailles outside Paris. There Lee Ufan, the Korean-born cofounder and theorist of Japan’s late-1960s and early-’70s Mono-ha (School of Things) movement, has temporarily installed 10 new sculptures from his long-running “Relatum” series (through Nov. 2). The enigmatic works—nine of them sited in the chateau’s immense formal gardens—feature Lee’s signature counterbalancing of stone, steel and other materials.

Shadow of the Stars, for example, comprises a segmented fence of upright steel plates surrounding a circle of crushed-marble gravel and seven boulders arranged like the heavenly bodies of a constellation. The Giant’s Club, a long steel rod leaning across an enormous stone, serves as a metaphor for the standoff between wild nature and the human impulse to impose order.

Conversely, a pervasive, almost Romantic natural sympathy is suggested by Wind Blades, a sequence of wavelike metal plates laid out sequentially on the central lawn to recall the wind-on-the-grass ripples that Lee, 78, observed on one of his numerous preparatory visits to Versailles. (The artist has for many years kept a studio in Paris.)

In The Tomb: Homage to André Le Nôtre, a severe rectangular pit containing a boulder confronts the phantasmagoric Baths of Apollo fountain, with its three mythical figure groups set in an artificial grotto. The landscape architect Le Nôtre (1613-1700) is famed for transforming, at the behest of Louis XIV, some 16,000 acres of swampland into Versailles’s rigorously geometric gardens and park, only occasionally punctuated by such frothy statuary outbreaks.

Lee’s The Arch of Versailles, very much in Le Nôtre’s spirit, is a simple, vaulting steel arc some 100 feet high and wide, that—depending on one’s angle of view—reframes the palace, the long central lawn and/or the sky itself. Seemingly held in bent tension by two bracketing rocks, it was inspired, Lee says, by a rainbow that he saw as a young man while living in Japan.

This project’s sole interior piece—erected in an ornate, two-story palace atrium—harks back materially (though on a grander scale) to work Lee made around 1970. A freestanding wall covered with a fluffy coat of white long-strand cotton, topped by a boulder and immersed at its base in more cloudlike billows of cotton, it simultaneously evokes the surging form of Rodin’s monument to Balzac and the misty effects of Far Eastern mountain-and-water paintings.

Such binary relationships have long been at the heart of Lee’s art. Born in Korea in 1936, he grew up in the remote countryside under the contrasting influences of a grandfather who was a farmer, a father who was an international journalist and a mother who lived as a provincial housewife while maintaining a personal elegance and a love of the classics. At the age of 20, Lee, whose first intellectual passions were literature and philosophy, went to study in Tokyo.

At the time, animosity ran deep between Japan, which took a culturally superior stance toward its neighbor, and Korea, still resentful over 35 years of Japanese occupation (1910-45). Emerging as an artist and essayist steeped in Eastern thought but equally responsive to Heidegger and other Western thinkers, Lee was often in a state of cultural suspension—too foreign to be included in many Japanese shows, too transnational to be considered a truly Korean artist back home.

While fully aware of Abstract Expressionism, Minimalism, Arte Povera and Land art in the West, the artist resolutely committed himself to an Eastern artistic practice based on contemplation, restraint and thoughtful pacing. For him, the control of breath, brush, energy and formal rhythm are intimately interrelated.

Over the years, Lee also turned lingering cultural dichotomies to his advantage, creating a body of abstract work reflecting, in both painting and sculpture, a quiet rapport between manmade and natural materials, form and emptiness, visual velocity and stasis. He became not only a leader of Mono-ha but, thereafter, a globally exhibited independent artist. Most recently, he has enjoyed international blue-chip gallery representation (Blum & Poe, Pace, Kamel Mennour), the 2010 establishment of a private museum designed by Tadao Ando on the island of Naoshima, Japan, and a 2011 retrospective at New York’s Guggenheim Museum.

All of this makes Lee a particularly intriguing choice for the Versailles commission. Several predecessors in the annual project have produced works in keeping with the ornate frivolity of the palace’s interior (Jeff Koons, 2008; Takashi Murakami, 2010; Joana Vasconcelos, 2012), while last year Giuseppe Penone (chosen by Alfred Pacquement, director of the Centre Pompidou, who also selected Lee) presented blasted, split, misshapen trees representing a darker subtext of Le Nôtre’s vision: the fierce imposition of human will on a disorderly world.

Lee, however, seeks to disclose a transcendent order that he believes is already there. The Cartesian cogito (“I think; therefore, I am”), which lies at the heart of the French rationalist tradition, is linked in his artwork and writings to the isolate, all-discovering meditation of the Eastern sage.

In both cases, a lone individual—infused with the thoughts of countless forebears but ultimately concentrating solely upon his or her own consciousness—breaks through, paradoxically, to a form of selflessness: spiritual enlightenment for the sage, universal principles of mathematics, law, ethics or even landscaping for the rationalist. Each becomes an absolute monarch of mind.

This approach depends ultimately on a version of Descartes’s claim that “all that is very clearly and distinctly apprehended is true. . . . Things which I see clearly cannot be other than as I conceive them.” There are many potential objections to this idea—but no matter. For artistic purposes, it remains a beautiful dream. As beautiful, one imagines, as a summer masque before the French Revolution—or a Japanese rainbow.