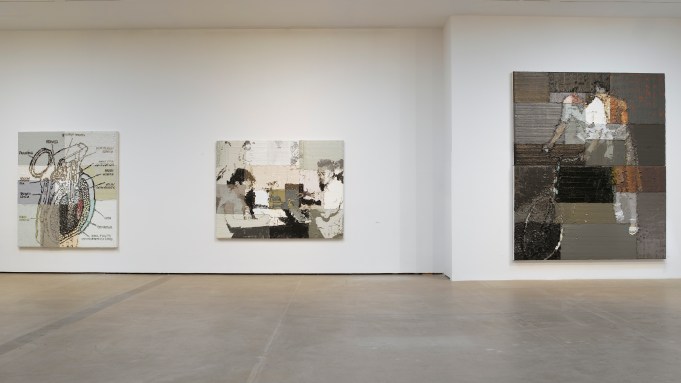 Juicy painting and the big visual statement are both alive and well in China today. If you have any doubt, check out the 11 large-scale oil paintings by Li Songsong now on view, through Aug. 5, at Pace Gallery’s 534 West 25th Street location. The show, Li’s first U.S. solo, provides American viewers an impressive introduction to the 38-year-old artist, who is well known in the People’s Republic for super-thick paint and blocky compositions that seem to waver halfway between their photographic source images and pure painterly abstraction.

A 1996 graduate of China’s premier art school, the Central Academy of Fine Arts (CAFA) in his native Beijing, Li is a member of the changing nation’s “in-between” generation. Born into a well-placed military family, he is too young to have directly witnessed life under Mao (who died in 1976, when the artist was three) but old enough to remember the Tiananmen Square uprising (violently squelched in 1989, when Li was a teenage student at the CAFA-affiliated high school). He was 21 when two members of China’s then utterly marginalized avant-garde were briefly jailed in 1994.

Thus Li remains experientially set apart—both from his older peers who underwent Red Guard indoctrination or forced “re-education” in the countryside during the Cultural Revolution (1966–76), and from younger colleagues who have known only a rising economy, relative openness and growing international awareness of China’s experimental art scene, now a global market phenomenon.

Li’s “dangling man” status (recalling the disconnectedness of Saul Bellow’s protagonist waiting to be drafted) has formal corollaries in his work. He references images that are fraught with historical, political or intensely emotional content-a Nazi execution scene (Grey Forest, 2010), the diagram of a hand grenade (Genade, 2011), the depiction of a man crawling toward an exit as smoke fills a plane (Escape, 2010). But he decontextualizes these pictures, zeroing in on minor details and surrounding them with grids or other seemingly arbitrary geometric constructs. His impasto, applied section-by-section from upper left to lower right, is so layered and worked that it insistently draws attention to the paintings’ compositional balances, odd colors, pocked surfaces and heaving textures.

Consequently, one can almost—but not quite—forget that the two young people in Couple (2011) are derived from a famous 1989 photograph of lovers sheltering under an overpass with their bicycle while tanks roll above them toward Tiananmen Square. There is in Li’s selective, romantically tinged treatment (no overpass, no tanks, only lovers) something of the self-censorship that pervades contemporary Chinese life and art. Yet his express motivations are purely esthetic.

In our recent email exchange and conversations, the painter made it clear that he does not wish to use images to commemorate events or teach lessons or facilitate social critique. Indeed, he abjures persuasion of any sort-both the old propagandistic type that dominated China’s Socialist Realist era and the new post-Opening variety shaped by advertising and pop media. He does not choose images to make a point; he reacts to images that trigger his strongest and most intuitive artistic responses.

Nevertheless, Li is fully aware of the jarring psychological effect his technique can sometimes have. “There’s a little cognitive dissonance going on,” he remarks to Pace Beijing president Leng Lin in a catalogue interview for the New York show. “It’s like telling a story packed with violence and gore with a huge smile on your face.”

In the land of Yue Minjun’s broad-grin visages, Li is not alone in internalizing that sly principle—which fellow artist Ai Weiwei boldly violated when he stopped smiling and made his criticisms explicit.