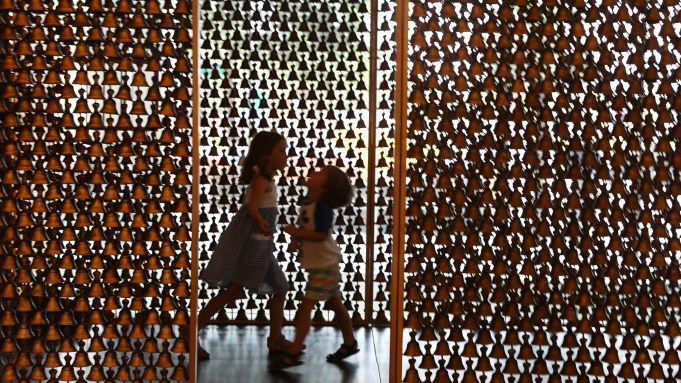 This year, Asia Art Week in New York (Mar. 13-21) will include 25 auction sales at five auction houses, gallery open houses and exhibitions at 22 Asian cultural institutions. At Art Basel Hong Kong (Mar. 15-17), 13 of the 233 galleries represented will hail from Singapore, with an additional 10 from the Asia Pacific region. Leading up to these two events we offer a recap of Art Stage Singapore. A.i.A. traveled in January to the fair, which primarily featured spaces from Southeast Asia, to learn more about the region’s expanding market.

How do art fairs and other high-end commercial ventures affect the lives of artists in areas once considered peripheral? In light of Art Stage Singapore (Jan. 22-25), the central event of Singapore Art Week, I spoke with a number of regional artists, collectives and curators now dealing with increased market attention.

Billed as the flagship art fair of Southeast Asia and one of only two leading fairs in Asia (the other is Art Basel Hong Kong), Art Stage Singapore, in its fifth edition, grew considerably since its launch in 2011; this year, 51,000 visitors attended the fair (up from 45,700 in 2014). Held in the cavernous Marina Bay Sands Expo and Convention Center, Art Stage boasted the over-the-top slogan “We are Asia” and differentiated itself from other international fairs by emphasizing its regional identity, with 75 percent of the 238 participating galleries hailing from the Asia Pacific area.

More than a market platform, Art Stage Singapore strove to be a “temporary museum” designed, according to director Lorenzo Rudolf’s catalogue statement, to “overcome the ideological dispute between the commercial and non-commercial.” Clearly serving this ambition was the approximately 10,000-square-foot Southeast Asia Platform ensconced within the fair, which presented contemporary art from the region. “Eagles Fly, Sheep Flock—Biographical Imprints: Artistic Practices,” the show curated there by Singaporean Khim Ong, featured 32 emerging and established artists.

Many of the pieces addressed the political and social histories of Asia. Singaporean artist Choy Ka Fai, for example, presented 3-D printed artifacts from his series “Lan Fang Chronicles” (2009-12), which evokes life in a 19th-century Chinese settlement in what is now Indonesia. Other works engaged with Western contemporary art. Vietnamese artist Hoang Duong Cam showed a triptych collage juxtaposing images of his family, Japanese novelist Haruki Murakami and the late Dutch conceptual artist Bas Jan Ader. In a live performance, Singaporean Zaki Razak donned an Afro wig to interview art world personalities in a parody of an American talk show.

“We are talking about a region that is very diverse,” Ong told A.i.A. “I deliberately did not have a specific theme. I wanted to focus on individual artist’s practices instead, to give a sense of what is coming up in the region. For the artists and curators working here, life just goes on. The market attention provides opportunities, but they continue practicing as usual. They are not really aspiring to be famous or top artists.”

“The art market cannot change artists” said New Delhi-based Mithu Sen, winner of Best Emerging Artist Using Drawing at the Prudential Eye Awards (Jan. 20), when I ran into her at the fair. Sen, whose site- and time-specific installations combine drawing, sculpture, video, performance and poetry to explore gender and identity politics, continued, “True artists will work the way they were already working. But this kind of help is a positive thing. It will make them more experimental.”

Among the highlights of the fair were the artist-run spaces. Recently formed Run Amok from George Town, Malaysia, was exhibiting for the first time. “We try to work with young artists who are not so established,” Trevor Jamison, the Australian co-founder of the collective told me at his booth. “Contemporary art is starting to kick off [in Malaysia] now. I think people are realizing that there’s more to art than oil paintings and watercolors, portraiture and landscapes. There’s a younger generation coming up that is experimenting more and influencing the market more.”

“In Singapore you have spaces like Gillman Barracks, which is more commercial, and then museums, which are for more established and canonized artists,” Chun Kai Feng explained at his booth, which featured 54 magnets attached to metal plates made to look like refrigerator façades. Custom-designed by the members of Latent Spaces, the magnets were on offer as one work. “Our gallery is a kind of testing ground. Artists will show things that are maybe still brewing, things that they are exploring but don’t want to place in a more prominent space yet.”

In addition to hosting events like artist-curator “speed dating,” the group also sold ice-cream bars from a cart, which soon became one of the more popular destinations at the fair. When I asked Feng about the ice cream, he cited artists’ concerns over how to financially sustain a practice without taking on a day job that depletes their creative energies. “The people who gallery-sit in our place sell ice cream as well as explain the works to the audience. Whatever proceeds come from selling the ice cream pays them,” he said. “For us, selling ice cream is still OK. It will not fund the art space, but it is something to start off the conversation.”