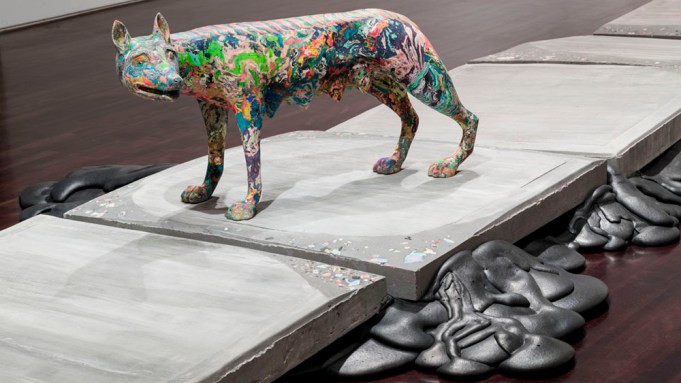 The centerpiece of “She-Wolf + Lower Figs,” Lily Cox-Richard’s solo exhibition at the Blanton Museum of Art in Austin, on view through December 29, is a sculpture of an alert female wolf. The animal’s prismatic pelt recalls iridescent gasoline on wet asphalt. But the colors of She-Wolf (2019) run deeper than the surface. Cox-Richard combines pigment with plaster and rabbit skin glue in a version of scagliola, a process in which color is embedded in materials like plaster to mimic marble inlays and gemstones. The technique originated in ancient Rome, but has been used throughout several architectural periods, including the Italian Baroque and the neoclassical revival in the United States. The morphing and persistence of ancient Greek and Roman motifs throughout history anchor Cox-Richard’s exhibition, grounding her critiques of aesthetic ideals and the ways in which they are propagated.

She-Wolf is a replica of the Capitoline Wolf, the famous medieval bronze housed at the Capitoline Museums in Rome. Absent from Cox-Richard’s sculpture are Romulus and Remus, the twins who according to myth were suckled by a wolf and grew up to found Rome. They are part of the Capitoline Wolf, but, due to certain stylistic departures, are believed to have been added in the Renaissance, several centuries after the wolf was cast. To produce her facsimile, Cox-Richard 3D-scanned plaster copies of the Capitoline Wolf and incorporated open-source 3D scans of the bronze original. She then 3D-printed a miniature model, carved a full-size version in foam, added steel reinforcement, and sealed it with the colorful scagliola. A copy extracted from an amalgamation of copies, She-Wolf hints at the Western tendency, throughout history, of idealizing, mythologizing, and regurgitating certain aesthetic models. Mussolini famously disseminated replicas of the Capitoline Wolf around the world.

The replicas Cox-Richard scanned were part of the Blanton’s William J. Battle Collection of Plaster Casts, a group of seventy-odd nineteenth-century white plaster reproductions of ancient Greek and Roman sculptures. Such replicas comprised the bulk of American museum collections in the nineteenth and early twentieth centuries. Americans, disregarding the histories and cultures of Indigenous peoples on this continent, considered white European history and culture aspirant, civilized, and worthy of study. Thus, this is what they chose to collect, display, and use as pedagogical tools. Plaster replicas were once central to artistic training. But their popularity declined over the last century, partly due to their status as copies and the acquisition of originals. The Blanton’s collection is one of the few that still survive.

Cox-Richard’s She-Wolf stands watch atop a sundered, thirty-foot-long sidewalk: Ramp (2019). Along the gritty gray walkway, contraction joints uncouple as a silvery material, recalling Lynda Benglis’s sculptures, appears to ooze up from subterranean depths. Corners of the path’s seven concrete slabs are abraded, revealing brightly colored flecks that hint at vivid mosaics embedded within. This fragmenting promenade mimics the platform downstairs in the museum where the Blanton’s plaster casts are displayed. According to a wall text, the ruptures and glimpses of color suggest “the variety of perspectives we should enlarge the [Western] canon to contain.” Combined, She-Wolf and Ramp certainly read as critical of that lineage’s monotony—at least to those familiar with its canonical works.

Behind the cleaved footpath at the far end of the long gallery, two storage pallets approximate informal altars, bolstering a hulking two-part plaster sculpture from the museum’s collection. Depicting goddesses Dione and Aphrodite, the plaster work was cast from a marble original by Greek sculptor Phidias, first installed on the Parthenon’s eastern pediment nearly 2,500 years ago. Aphrodite reclines upon Dione, their headless, armless torsos swathed in regalia. Cox-Richard has wrapped the chalky clones in vibrant synthetic tulle netting (Figs., 2019). She similarly intervened on the Blanton’s first floor, draping material over a replica of the Apollo Belvedere. In their texture and color, these ostentatious meshes recall cotton candy. At Aphrodite’s feet rests a blue-raspberry-colored scagliola hairpiece (Weave, 2019). Its forms also come from 3D scans Cox-Richard made from the Blanton’s collection of plasters, mostly of ears and hair, particularly those of the Apollo Belvedere and Julia Domna. Those same partial scans were used as the basis for now-busted scagliola pieces, fragments of which appear in the marquetry of Ramp.

Cox-Richard’s shots of color into the classics reanimate them for audiences who might otherwise find them stale. More importantly, they serve as a reminder that Greco-Roman sculptures only appear achromatic because centuries of weathering have stripped away their color. Text on the Blanton’s website, referring to its collection of reproductions, suggests that Cox-Richard’s sculptural installation “invites us to consider the legacy of these objects, raising questions about their role in perpetuating notions of physical ‘perfection’ and ‘whiteness’ as ideal.” Notably, the Roman marble Apollo Belvedere (ca. 120–40 CE) was championed by eighteenth-century art historian and Eurocentrist Johann Joachim Winckelmann for its whiteness.

Cox-Richard’s critical aim may be lost on the casual viewer who opts to forgo the wordy wall texts and ogle at the novelty of familiar forms saturated with rousing chromatics. For the more inquisitive viewer, though, Cox-Richard offers layer upon layer of translations, reinterpretations, and replications that scuffle with the aesthetic authority of whiteness. And the artist’s meticulous craft manages something unlikely: a near-seamless integration with the more conceptual gestures of readymades and institutional critique. Considering the exhibition’s critical motivations, that perfectionist hand and expert eye for explosive color produce an ironic conundrum. Do the microdoses of spectacle serve to seduce the viewer who lacks critical context around the Western canon into an investigative, analytical trance? Or is the show so sweetmeat, so damn Instagrammable, that the critique flies over heads? This paradox might raise more questions about the contemporary museumgoer’s willingness to slow down than about Cox-Richard’s actual work. For those already apprised of the sociohistorical critiques Cox-Richard lays out, the curious materiality and provenance of her sculptures offer plenty of puzzles worth trying to solve.

MAPIC Bounces Back as Mixed Use, Entertainment Trends Accelerate