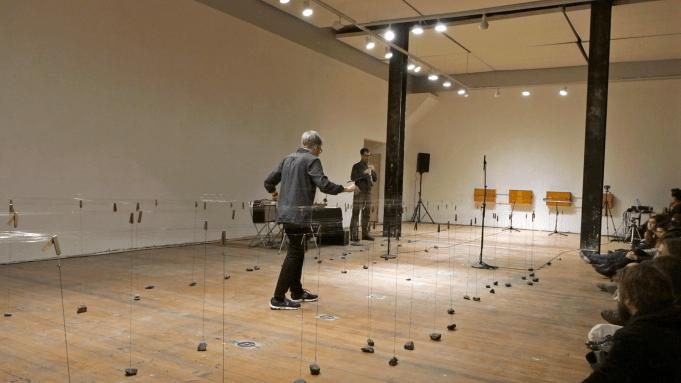 Artists’ Television Access (ATA) is an artist-run non-profit in San Francisco’s Mission District. Its ragged punk sign hangs over a few square feet of sidewalk on Valencia Street. A decade or so ago, Valencia Street was the psychogeographic border between the Mission that was in the process of rapid gentrification and the Mission that hadn’t yet been infiltrated. At that time, this incipient process was beginning to be visible but far from complete. New College, an experimental university, still served students in its several buildings on Valencia. (It shuttered in 2008.) There were travel agencies, hardware stores, used bookstores. Now there are boutiques, haute chocolate dispensaries, Michelin stars. Serial parklets—green spots that adjacent businesses claim as spaces for their mostly white, mostly wealthy clientele to lounge—populate the sidewalks.

ATA launched programming in 1984, operating as a television production facility for artists pursuing public access shows. In 1987, ATA moved to its current location on Valencia. It is one of the rare organizations in the Bay Area that does not focus its programming on marketable visual art objects. It is a home for the radically unsellable, the momentary, fugitive, lawless and nomadic efforts of truly experimental practitioners: ATA hosts noise shows, rogue screenings, and political meetings.

Small Press Traffic brings poets and writers like Aisha Sasha John, Dolores Dorantes, Claudia Rankine, and Monica McClure to read in the space, which some of the artists who collectively run ATA still live in. I saw Eileen Myles and C.A. Conrad read there in 2012, to an audience so big that it broke the cliché of a “packed house.”  The people who were denied entrance due to the lack of space organized their own reading on the sidewalk. Myles and Conrad gave them an encore at a laundromat a couple of hours later.

ATA also sponsors Right Window, a gallery run by a collective of curators which shows work by emerging and established Bay Area artists. I had to laugh when, in a recent debut show, Matthew Arnone (who has since moved to Brooklyn) installed Calf-Bearer (2015), a larger-than-life cardboard cutout self-portrait. It shows Arnone dressed in a shepherd’s robe with an adorable placid lamb around his shoulders. The image is classical, even Biblical. In the context of Arnone’s work, largely abject portraits of figures groveling, pissing on themselves, falling, and failing, Calf-Bearer was rather perverse in its earnestness. Of course, plenty of passersby ignored it. But Calf-Bearer, peering out of the gallery’s front window, was a taste of the weird San Francisco that my friends and I all desperately miss.

When I moved to the Mission District in 2005 it was already gentrified. My partner and I moved into a one-bedroom apartment in a converted Victorian house. Our landlord Frank had grown up in the house, and our neighbor, also named Frank, had lived all of his forty years in the house’s other apartment, which he shared with his mom. I didn’t have a clear understanding of myself as a gentrifier. So I was genuinely surprised when, on the very first night we spent in the house, our neighbors rang our bell and asked me how much we were paying for rent, the gleam of schadenfreude flickering softly in their eyes. Quite sensible schadenfreude. Frank, our neighbor, said offhandedly as we lugged boxes of books and ragged furniture up the stairs, “I hope you all aren’t Raiders fans.” We weren’t.

The symptoms of this transformation were many. It wasn’t just that dive bars, panaderias, and other small businesses were sold, gutted, and repackaged as dystopian hubs for vast beer halls and avant-garde sausage joints, though those things did happen. It wasn’t just the wholesale reconfigurations of land and space, the magically appearing condos and the very mundane violence of increasing evictions. Those things happened too. And it wasn’t just the dreaded “Google bus.” It was also the Linked-In Bus, the Yahoo! Shuttle, and the Genentech omnibus.

Walking around the Mission in 2016 for those of us who have been around for a while is complex. I say to my friend: “Did you ever think you would miss hipsters?” We laugh, and our laughs are salty with tears. I still love walking around the neighborhood, but I do it with a permanent look like someone has farted. One tried strategy is to cling to whatever has continued to survive the force of excess capital and gentrifying desire, which is both abstract and extremely specific in its effects. Maybe it’s not much. But you can go to ATA and see programs there. Stop in front of Right Window and see the works. Drink at the Uptown. Go see something at The Lab.

The Lab is another key survivor of the strangled neighborhood. Founded in 1984 by five students from San Francisco State University, The Lab is thriving. Originally in the SoMa neighborhood, The Lab relocated to the Redstone Building in 1995, a historical landmark in the Mission that housed radical political organizations for decades in the twentieth century. Two blocks away from Valencia, it stands out as an old-school institution in the geographical heart of an ongoing struggle to demolish the past in order to make way for the future.

The Lab director Dena Beard has brought renewed vigor to the organization since she was hired in 2014. The Lab, like Right Window, faces outward: all of its activities are publicly visible. A live camera broadcasts what happens inside on The Lab’s website. The space is accessible day and night. In addition to the rich events programming that takes place several times a week, you can walk in and see artists at work.

Recently, legendary Bay Area composer, performer, and instrument designer Ellen Fullman took up residence in the space to build a large-scale instrument for a series of events. Fullman’s Long String Instrument involved over a hundred strings spanning the 53-foot length of The Lab’s interior space. She gave workshops, lectures, and performances with the instrument, playing scores that use her unique system of graphic notation.

“I see the process of rebuilding and re-imagining The Lab within this climate of austerity as an opportunity to renegotiate questions of value,” Beard wrote via e-mail. “Because we are small we don’t have to make the art fit within the parameters of the institution. We can let art dictate its own terms.”

Of course, over the years small and medium-sized organizations promoting the arts have come and gone. Galleries more devoted to the art market are relatively stable, although it’s hard to say whether the new denizens of the Mission’s flats are buying artworks. As one might predict, the organizations that have tried to be more inclusive of different media, genres, and social scenes (like The Lab and ATA) have struggled the most under economically precarious conditions.

And indeed, ATA has been engaged in an extended fight for its survival on Valencia Street. Five years ago, American Apparel was making plans to open a branch right next door—one of their board members referred to this scheme as a “Trojan Horse.” And yet, this was a fight ATA’s neighbors felt was worth waging. Artists, board members, other small entrepreneurs, neighbors, and friends across the Bay Area organized, resisting the move until American Apparel gave up.

No art space, no matter how legendary, proven, or radical, is going to be able to undo the drastic changes which have taken place in the Mission, let alone San Francisco—even the Bay Area—as a whole. And while I have lamented the loss of them and other neighborhood fixtures, and mocked tech millionaires, the violence of gentrification is not vague. In the end, art spaces might be the least of our worries in the face of rapidly increasing wealth. The value of these obdurate venues, of their stubbornness and their struggle, is in the renegotiation of value that organizations like ATA and The Lab make possible.