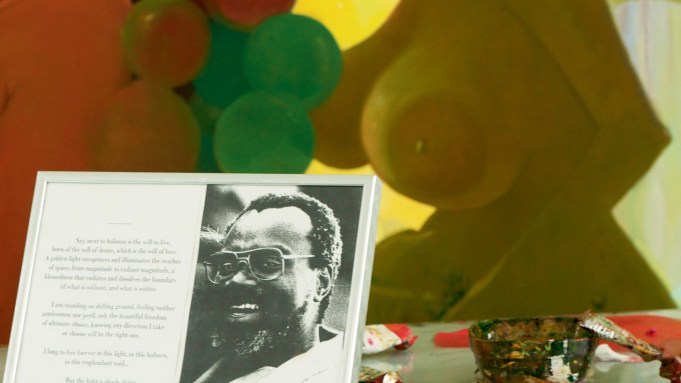 Jesse Murry died not long after my opening at Elizabeth Koury gallery in SoHo, in January 1993. He was the most erudite person I ever met. He was physically grand: tall, with a big belly, and very dominant. He went to Yale graduate school in his late 30s to become a painter after publishing art criticism and being an art history professor. He’d had a difficult young life, bounced around among people who would take care of him. Black, southern—Jesse was rejected by his family when he came out of the closet but was eventually adopted and raised by a woman named Isabel, who lived in Westchester County, N.Y. Isabel, who he said was a librarian, loved him, and exposed him to all sorts of culture. He knew everything: film, fiction, history, trash TV shows, theater, poetry, Broadway, opera, pop music, you name it; and yet, though he got started very late, he wanted badly to paint. With a few exceptions, the students in our class were in their early 20s. We all knew nothing of the world, but we had much, much more painting experience than he did.

I met Jesse at my Yale interview. We were all waiting in a hallway. I was with my parents, being a kid. He kept smiling his big smile at me and waving. He later said that he loved those paintings I was applying with, but I thought he was making fun of me. With his great sense of humor, he aced his own interview, waltzing in and doing an impersonation of Bette Davis with her line from All About Eve: “I have not come to New Haven to tear the ivy off the walls of Yale!”

Jesse always visited my studio at Yale when I was having a really hard time. I had started doing these little, tiny paintings, a few inches high, very intimate. The paintings contained a degree of what is still in my work—these Sacred Conversations. I had seen one by Bellini in Venice a few years earlier. I didn’t realize I was conjuring that up until Jesse looked at the paintings—of two figures, heavily clothed, repressed-looking, in a room, not talking to each other. It was a model of what I was going through, psychically. He said, “Oh, these somehow remind me of Sacred Conversation paintings by Bellini.” When you’re a young artist, and you see a painting that has such an effect on you, you have to just forget it. You take it in, and years later it comes back out in some weird way. I wouldn’t have recognized that painting—one of my favorites—in my own work if this person hadn’t come along to say it: this person who had traveled the world.

Fran Lebowitz once said that the first people who died of AIDs were the “people who got laid a lot.” The popular guys. Jesse was so special. I think when he arrived at Yale—we were there from ’84 to ’86—he was already HIV-positive. I remember the day he went to get his AIDs test—he didn’t want to, but he had free health care while he was there, and he was always broke. Isabel died, and the next week he found out he was HIV positive. And at that moment, even without making the decision, I decided to be there with him until the end. Because he had no family. I had no idea how hard it was going to be.

I’ve been thinking about how to put it in a nutshell. Jesse was so insightful as a viewer of my work. I’m sorry that I didn’t have a chance before he died to become mature enough to be an insightful viewer of his work. I was still struggling. But Jesse was really one of my most important teachers—and I think I had a lot to teach him, about painting, and about letting go of your brainy self when you paint. It is very important to me to totally connect with what I’m doing; that was a struggle for Jesse, to connect. He was so hyperintelligent, so learned—yet so self-conscious, because he was older and in a hurry. He had to be self-conscious, because his time was short.

After school we all lived in the East Village and he would come to my studio, and what he said about my work stays with me to this day. He helped me believe in myself. When he saw the “Bad Baby” paintings, he said, “Mamma, you gotta have your pussy screwed on straight to make these paintings.”

In the fall of 1992, when he was incredibly frail and just a few months away from his death, he really wanted to come to my studio. It was difficult to get him into a cab, out of a cab. He was really sick. He looked at the paintings, and said, “It’s going to be a rough ride, but this is really something, Lisa.” He was in the hospital when I had my opening. I talked to him on the phone, and he wanted to know every detail. Who came? There were around two people at that opening; you could hear a pin drop. Nothing sold. I was happy because I loved the “Bad Babies.” Still, all the happiness I felt about that show was tempered by the gravitas of Jesse’s death, which really put everything into perspective.

He had said, “You should make those paintings big.” Later, I made the painting Big Blonde Smoking [1994] on a blank canvas that he prepared but never got a chance to work on. It was 6 feet square: he had very carefully determined the size for himself. I’d not made a painting that large since undergraduate school. He told me what to do: attack Color Field painting at the scale it was meant to be.

One day he was in my studio, and he got chilly. I wrapped him up in a blanket. He said that when he saw me looking out the window, I was looking at my future . . . and that he knew it was going to be incredible. I was struggling a lot and was in debt—probably $6,000 to a credit card company, plus student loans. Giving me that hope was a generous gift, especially at that difficult time in his life.

My photograph of Jesse, which I have kept in all my studios, was actually a printout made for the funeral, with one of his poems attached. In it he writes, “A golden light encaptures and illuminates the reaches of space, from magnitude to radiant magnitude.” Yet, at the end, “the light is slowly dying.” I look at this picture all the time and remember the many amazing insights he had into art and life, and how Jesse wanted so badly to make art. The fact that he didn’t have a future is heartbreaking.

—As told to Faye Hirsch

Amber Ruffin on Racism, Comedy and the Joy of Enduring

Save $50 On Amazon’s Kindle Paperwhite