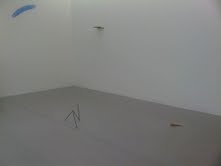 “It’s the first time I have ever witnessed four collectors racing up the stairs at Liste,” Patricia Kohl, co-owner of Berlin gallery and third-time fair participant Sommer & Kohl, Berlin told me during the opening of Art Basel’s most important satellite fair.

They were probably on their way to the top-floor stand of Elizabeth Dee, New York. Dee, repeating her performance last year, had a first-day sell-out of her booth, a solo presentation of paintings by young New Yorker Mark Barrow. Or maybe they dashed toward Adrian Ghenie’s latest, Self Portrait as a Monkey 2 (2011), in the second-floor booth of Plan B, Cluj/Berlin. Boasting a €35,000 price tag, it was reserved less than 10 minutes after doors opened.

Amidst the opening stampede, I overheard an Italian voice in the crowd saying, “everyone goes through it starting at the top,” pointing at the iron staircase climbing up the façade of the redbrick building. French collector Frederic Goldschmidt preferred the elevator, telling A.i.A. that Liste was “so crowded that it was difficult to speak to gallerists about the works.”

By the end of the first day, Mark Dickenson, owner of Neue Alte Brücke, Frankfurt, was relaxing in sun outside at the fair’s café—his booth was already sold out. Galleries Limoncello, London; Hotel, London; Mezzanin, Vienna; and veteran sixth-time participant Martin Van Zomeren, Amsterdam, all reported sold out booths on day two. The latter attributed his good fortune to the fair: “There are only two social art fairs, Art Rotterdam and Liste—that’s why I do Liste.”

For the first time Liste included works—the aforementioned Ghenie painting, for one—valued at over €20,000. As established galleries such as Peres Projects, Berlin, and Harris Liebermann, New York, return, Liste might no longer be an “emerging art fair.” But with an unprecedented eight galleries—Balice Hertling, Paris; Jocelyn Wolff, Paris; Monitor, Milan; Neue Alte Brücke; T293, Naples/Rome; Kaufman Repetto, Milan; The Breeder, Athens; and Diana Stigter, Amsterdam—returning to Liste after showing at the main fair last year, edition seemed like a salon des réfusés. The three Berliners ousted from Art Basel—Mehdi Chouakri, Giti Nourbakhsch and Eigen+Art—stayed away from fairs all together.

The most unconventional stand belonged to Tulips & Roses from Brussels, whose sparse booth—a solo presentation of six small-scale sculptures and a video by Liudvikas Buklys—could have easily fit into any collector’s carry-on baggage. In the same room, Silvie Jo Buschmann of Circus, Berlin, sold paintings by Özlem Altin and entertained SMAK curators Philippe Van Cauteren and Thomas Caron at her booth. Wojciech BÄ?kowski performed his one-minute-long Take a Minute (2011), in which relayed feedback from a ghetto blaster to a light bulb causing it to flicker, at the booth of Stereo, PoznaÅ?, in front of a small group of art enthusiasts that included collectors, curators and Polish artists Tomasz Kowalski, Katarzyna Kozyra and Agnieszka Polska. At Lautom, Oslo, Anne Mette Hol surprised visitors with 12-color drawing (2011), a pair of A4-sized boxes casually placed on the floor, with two trompe-l’oeil grey-scale drawings folded into them. They survived the stampede.