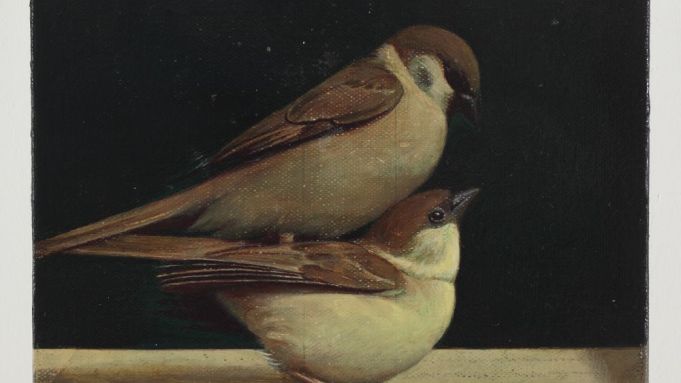 Beijing-based artist Liu Ye is in New York to finish painting his ultra-refined nine-part Bamboo Bamboo Broadway in situ at Sperone Westwater for his show of the same name [opens Sept. 6].  The title riffs on a Mondrian favorite, Broadway Boogie-Woogie (1942-43), signaling a blend of Chinese imagery (bamboo) and Western modernism (grids).

Liu Ye comes by his European influences via the Hochschule der Künste in Berlin, where he studied from 1990 to 1994, as well as through a residency at the Rijksakademie in Amsterdam in 1998. “I hadn’t planned on leaving China to study,” he said. At the time he was enrolled at the Central Academy of Fine Arts in Beijing. But when another invited student couldn’t go to Berlin, Liu was asked to take his place. So he did, although it was hard for his family to raise the airfare. It was a historic moment, he recalled. “I had recently witnessed the protests at Tiananmen Square and, in Berlin, there were also protests; the Wall came down immediately after I arrived.”

It was the first time that Liu was directly exposed to Western modernism, to Klee and Mondrian, to Vermeer. He also embraced Dick Bruna, the popular contemporary Dutch artist and author known for children’s books. Bruna’s cartoonlike Miffy character, a female rabbit, appears often in Liu Ye’s paintings, such as Small Painter (2009–10) and Miffy and Mondrian (2010). Both works are in this show, as are other similarly small-scaled, richly colored figurative work. Liu, however, thinks of them as abstract, derived from geometric forms.

The two new bamboo-themed works are his first foray into a kind of landscape that is monumental in size, subtly delineated and monochromatic. Liu calls the pale green gray color “hesitant,” based on the prized indeterminate hue and luminosity of Sung Dynasty celadons.

The largest work he has created to date and the focal point of the exhibition, Bamboo Bamboo Broadway measures just under 20 feet square, while Composition with Bamboo #5 is somewhat smaller, around 7 by 12 feet. Liu was inspired by the gallery’s highest wall and the narrow space between it and the opposite wall. “I realized that if I make a huge painting there, you can’t back off, can’t retreat,” he says, “you’re swimming in it.”

Bamboo groves are a classic subject in traditional Chinese art, emblematic of a simple contemplative life away from court intrigues and corruption. Inevitably these associations underscore Liu’s canvases, but they are reconciled with modernism. “I think of bamboo as architecture, as a scaffold, it has strength and flexibility,” he says. Its segmented stalks are an instance of modularity similar to grids and to minimalist systems with their repetitions and variations.” Liu eliminated leaves from his pictures in order to highlight structure. He said, “The leaf is transient while the structure lasts.”