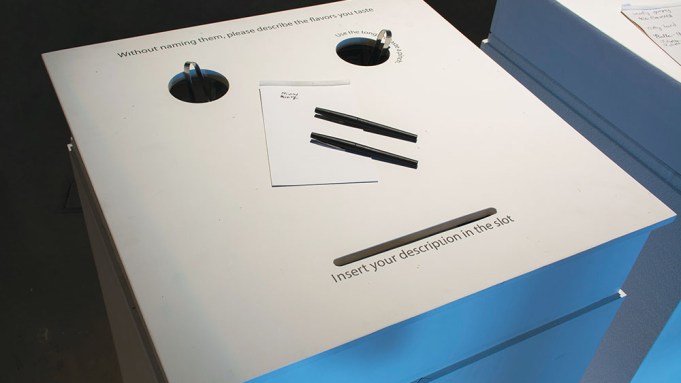 In Liza Sylvestre’s film Captioned—Twentieth Century (2018), a suited man summons another into a secretive huddle. The words at the bottom of the screen read: “He walks forward but looks backward. He must be talking about someone from the previous scene.” This reworking of a 1934 black-and-white screwball comedy is part of Sylvestre’s “Captioned” series, wherein the Illinois-based artist creates interpretative narrations for films without captions. Her descriptions include readings of visual cues and meta-musings on these cues’ insufficiency. She quips during a scene of two men engaged in rapid banter, bottles in hand, that “the strain of trying to comprehend makes me yearn for a drink too.” The “Captioned” works have a speculative quality, suggesting both guesswork and utopian yearning. Made privy to Sylvestre’s own navigations through media as a deaf person, the viewer begins to imagine previously untapped possibilities for sensorial communication.

Before her captioning practice was art, it was self-preservation. In grade school, Sylvestre penned imagined story lines in her notebook to get through in-class movies. In 2003 she decided to get cochlear implants, which she frequently describes as “bionic computer-ears” that make sounds seem like “an audio hologram.” For Sylvestre, the misconception of cochlear implants as a way to “fix” deafness is akin to the misreading of her work as solely an appeal for access to an inequitable system. These goals divert attention from the root issue—society’s limited, ableist conventions of communication, which put the burden of adaptation on those excluded by this systemic lack of imagination. Conversations in the Dark (2018), for instance, rethinks the typical art school critique: participants at the University of Illinois at Urbana-Champaign, where Sylvestre earned her MFA, gathered in a dark room and shined flashlights onto their mouths when speaking, in order to ease the process for those who rely on lip-reading. Inventive challenges to communication hierarchies run through her work, recently surveyed in the artist’s first museum solo exhibition, “Liza Sylvestre: Third Space,” at the Plains Art Museum in Fargo, North Dakota.

Noting in a written statement the “huge roles that museums play in creating normative rules that pave the avenues to engage with art,” Sylvestre organized the Sensory Loss and Art Symposium at the Weisman Art Museum in Minneapolis in September 2018. The conference brought together researchers and people with sensory loss to exchange experiences and expertise. For one activity, assigned groups—constituting one scientist, one artist, one person with vision loss, and one person with hearing loss—were tasked with moving through the museum to reach a collective understanding of artworks they encountered. Critiquing behavioral conventions in such imaginative ways, Sylvestre’s works propose expansive new modes of feeling and relating.

MINH NGUYEN is a Saigon-born, Chicago-based writer and curator.

This article appears under the title “First Look: Liza Sylvestre” in the September 2019 issue, p. 20.