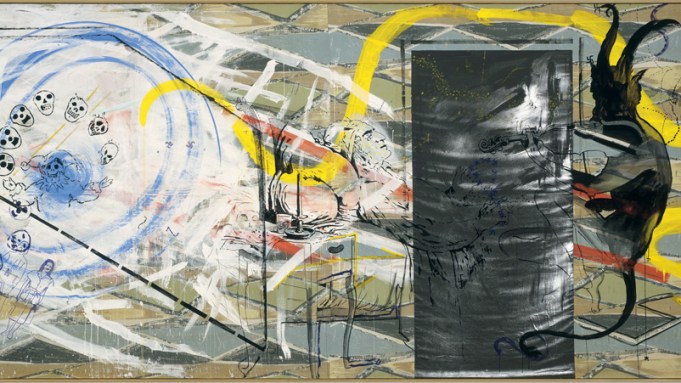 Here, she recalls her favorite 2014 exhibitions from England’s capital.

This memorable exhibition presented two new works. Ashes (2014) is an immersive film installation that tells the story of a young black man. The film was shot on Super 8 by cinematographer Robbie Muller in 2002; voice-overs and personal accounts of friends unravel the heartbreaking story of the young man’s death in a drug-related crime. Broken Column (2014) consists of a pair of sculptures; the larger is a black cylindrical granite column that stands on a wooden pallet; the smaller, second version of the same object sits under clear plastic on a white plinth. Together, they create a portable monument to lost and wasted lives.

“Tauba Auerbach: The New Ambidextrous Universe” at the Institute of Contemporary Arts

This exhibition showcased Tauba Auerbach’s ability to distill complex mathematical theories into form using sculpture, photography and weaving. It highlighted the artist’s innovative approach to color, mechanical processes and scientific principles of symmetry, with interplay between the organic and the digital. The result was a prismatic view of Auerbach’s alternate universe, which is replete with geometric patterns and symbols.

This impressive retrospective, organized in collaboration with New York’s Museum of Modern Art and spanning no fewer than 14 rooms at Tate Modern, introduces the audience to a broad range of Polke’s works, from early film performances to his paintings. The show gave an insight into the extraordinary breadth of this intriguing artist’s oeuvre, some of it unfathomable, some sublime.

Trecartin and Fitch are longtime collaborators who push boundaries in a wide variety of ways, redefining performance in the digital age. To visit this exhibition was to step into their world and explore themes of: technologically mediated voyeurism and narcissism. Priority Innfield, which was presented at the 55th Venice Biennale in 2013 and reconfigured for this show, is a rollercoaster ride that plays with reality television and the boundless spaces of the Internet. This is another realm, a completely immersive mise-en-scène.

Conceived to be viewed as a timeline spanning some 30 million years, this exhibition included all new works. Huyghe contrasts the natural and the man-made to scythe through time and boundaries, opening the show with a headless, reclining stone figure that was warm to the touch. This was in stark contrast to three large, dank aquaria that gave the appearance of the murky depths of a real pond and which reflected the title of the show. The centerpiece was a 19-minute film in which a monkey, wearing the mask of a young woman, has been trained to work as a waitress; her movements constitute the narrative. This, together with the other film depicting endless fragments of glutinous globules of earth and visceral matter, produced an uneasy sense of compulsion and revulsion that made for a compelling experience.

Philippe Parreno made masterful use of space at Pilar Corrias in his first exhibition in the UK since a 2010 solo show at the Serpentine Gallery. His beautiful new work, entitled With a Rhythmic Instinction to be Able to Travel Beyond Existing Forces of Life (also the title of the show), is an animation created with 238 drawings that Parreno made over the past four years and highlights his ability to constantly find innovative approaches to filmmaking. Parreno choreographed the space with the authority he brings to all his exhibitions, transforming the entrance to the gallery with a mechanical blind affixed to the window. The blind moved in response to a soundtrack created from the sounds of the street outside to open and close the space to both viewers inside and passersby outside.

Helen Marten’s first exhibition at Sadie Coles was a carefully choreographed installation that became almost a patchwork in space. The objects alternated between the handmade and the readymade, and behind the meticulousness of her show was a puzzle that slowly unravelled in the eyes of the visitor. Marten is in masterly command of her material, employing visual puns and a play on scale that makes viewing her work a rich and rewarding experience.

Lawrence Weiner, “All in Due Course,” at South London Gallery

Lawrence Weiner’s ability to reposition our understanding of sculpture and material forms through his wall texts compels audiences to rediscover language. While the form may be familiar to those who know his work, its message changes through the specificity of each space and audience, which Weiner manipulates to imbue new meaning in his works. The series of public events that were organized in conjunction with the exhibition explored the potential of language in art and emphasized the relevance of intensifying the links between public events and exhibitions.

Cerith Wyn Evans’s neon light installation at London Zoo’s Snowdon Aviary on the occasion of the Frieze Art Fair as part of Frieze Projects was a fine example of successful public sculpture. Viewers were cleverly encouraged to engage with the work, which was installed parallel to a foot bridge, by having to tilt their heads to read the neon text, which read, “So, I came to know what the japanese puppets taught us, namely, what it means to be moved.” It is based on a line from James Merrill’s poem The Changing Light at Sandover. A performance for which Wyn Evans and Susan Stenger floated along Regent’s Canal on a blue barge, coming into view with Stenger playing her flute and passing underneath the footbridge before disappearing from sight, remains unforgettable.

Louis Kahn, “The Power of Architecture,” at Design Museum

This was the first major exhibition in more than two decades of this seminal American architect. It lucidly organized his legacy by including documentary films and drawings alongside study models. Archival material offered insight into the architect’s interest in medieval structures, Scottish castles and ancient ruins in Italy, Greece and Egypt. The exhibition highlighted the Kimbell Art Museum (Fort Worth, Tex.), the Yale University Art Gallery (New Haven, Conn.), and the Richards Medial Research Laboratories (Philadelphia, Pa.) and underscored Kahn’s ability to transform the past through his usual abstraction into resonant emblems of modernity.