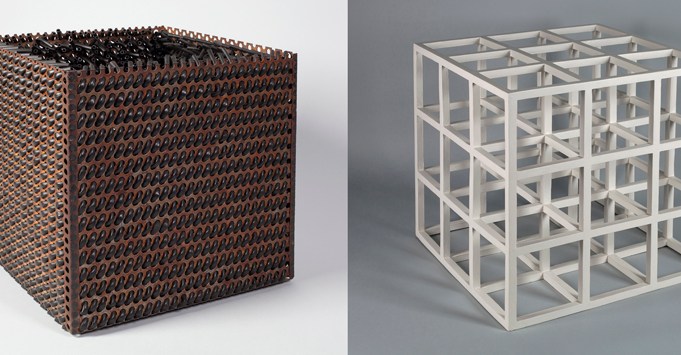 Eva Hesse and Sol LeWitt at Craig F. Starr, through May 27
Indianapolis Museum of Art curator Veronica Roberts, who organized this show, argues that while LeWitt’s influence on Hesse is widely acknowledged, the influence was reciprocal and profound. Inspired combinations of Hesse’s sensual, corporeal creations with LeWitt’s ordered and cerebral works make for a moving visual argument.

Jo Ratcliffe at the Walther Collection Project Space, through July 15
Jo Ratcliffe’s ghostly black-and-white photographs depict landscapes that appear mostly empty. But they record the sites and “leftovers” of various events, from battles to atrocities, that took place during the protracted Angolan Civil War. The eerie experience of examining them speaks volumes on the limitations of hindsight.

Richard Tuttle at Pace, through July 22
A master of the minimalist gesture, Richard Tuttle presents six sculptures, each with a colorful configuration of various materials held aloft within a framing structure. Called “Systems,” they relate to his 1964 palm-size paper cubes and to the large-scale, outdoor works he made for Artpark in upstate New York a decade later.

“Licked Sucked Stacked Stuck” at Jim Kempner, through June 18
Artist Paul Shore and art historian Nicole Root dug through art history books to find contemporary sculpture that they remade, with candy like Pez, Hershey bars, Starburst and Twizzlers, and then photographed. Seven Starburst candies adhered to a wall in a vertical stack form a high-fructose Donald Judd; a gingerbread house, cut in half, results in a sweet little Gordon Matta-Clark.

Garth Weiser at Casey Kaplan, through June 25
From far away these paintings resemble monochrome topographic maps. But a keen eye reveals a colorful under layer covered with a thick blanket of paint that looks like it’s been raked through with a wide comb, creating the kind of shiny ripple patterns that appear in oily urban puddles.

Jene Highstein at Danese, through May 27
Can minimalism be sensual? Jene Highstein answers in the affirmative in “New Sculpture: Towers and Elliptical Forms,” a show of sinuous-and clever-geometric forms in stainless steel.

William Kentridge at Marian Goodman, through June 18
For his new film Other Faces, William Kentridge checks back in with the paunchy, well-dressed Soho Eckstein, one of his recurring characters. In the film and in dozens of working charcoal drawings we see Eckstein moving about Johannesburg, a city at one moment quiet and meditative, at the next roiling with chaos and tension.

“Vision is elastic. Thought is elastic.” at Murray Guy, through June 4
Curated by artists Zoe Leonard and Moyra Davey, and related to the latest issue of Blind Spot, which they co-edited, this exhibition considers the relationship between writing and photography—often quite literally, as in works by David Wojnarowicz and Roni Horn, in which the artists wrote on the picture or in the margins.

James Little at June Kelly, through June 21
The large-scale, hard-edge abstractions by this under-recognized African American painter resonate with a political theme of social unity defined by images of national flags. Also in play are eye-popping allusions to African textiles explored via Little’s take on Color Field painting.

Florian Maier-Aichen at 303, through June 25
Florian Maier-Aichen refers to his heavily manipulated photographs as drawings, which is not as far-fetched as it seems. Highly skilled at Photoshop trickery, the German artist has created scenes and images-a Los Angeles street enveloped in snow, a mock Kenneth Noland painting floating on the horizon line where a black sea meets a white sky-that reveal their secrets upon closer inspection.