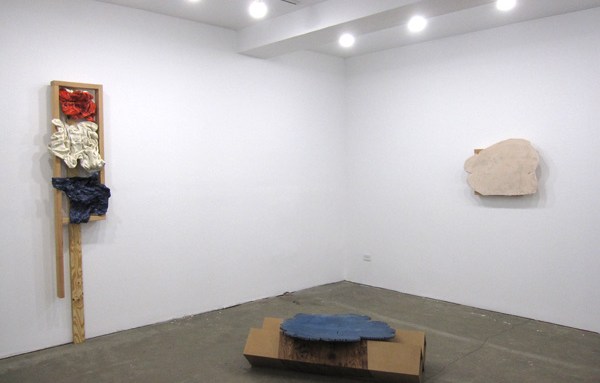 This week we check out David Shapiro’s obsessive, hand-drawn record-keeping of everything he bought or paid for last year; Gillian Wearing’s hi-def videos of strangers confessing their deepest, darkest secrets; and Damian Loeb’s film noir-esque paintings of his glamorous wife.

David Shapiro at Sue Scott, through June 19
I’ve never met David Shapiro, but I know a lot about him (or at least where he spends his cash) after seeing “Money Is No Object,” his show of a year’s worth of meticulously hand-drawn copies of receipts and bills, spun out on 12 long scrolls, one for each month. He has at least one kid (diaper delivery receipt and a slip for kids’ books checked out of the library); he lives in Long Island City (dry-cleaning bills, personal checks); and he buys his groceries at C-Town and Key Foods.

Gillian Wearing at Tanya Bonakdar, through June 24
Gillian Wearing’s mini-retrospective includes, among other works from the past six years, the devastating (though occasionally perversely funny) Secrets and Lies, a series of high-definition videos of people revealing major, actual secrets. The speakers are almost entirely obscured-and they need to be, for their secrets are truly outrageous.

Louise Lawler at Metro Pictures, through June 11
Louise Lawler’s photographs, printed on adhesive vinyl, are distorted to fit the dimensions of the walls on which they are mounted. The images were shot in galleries, auction houses and private homes and show iconic art historical images, like Sol LeWitt’s scribbles, Gerhard Richter’s skull and even the tutu on one of Degas’s little dancers.

Mark Grotjahn at Anton Kern, though June 25
The “masks” in Mark Grotjahn’s latest series of large-scale paintings emerge slowly from textured surfaces that look like extreme close-ups of colorful exotic bird feathers. This is one of those shows where the smell of thickly applied oil paint hits you as soon as you walk in the door.

Sean Landers at Friedrich Petzel, through June 18
In “Around the World Alone,” Sean Landers revisits a red-headed clown character he came up with in 1996, when he was trying to transition from text-based works to figurative painting. Inspired by Joshua Slocum, the first man to sail single-handed around the world, Landers’s new paintings show the sad-clown sailor adrift at sea.

Damian Loeb at Acquavella, through June 17
This exhibition’s curious title, “Verschränkung and the Uncertainty Principle,” refers to an interweaving of emotional states between the viewer and the thing seen. It’s the tip-off that Damian Loeb is not merely after pleasing photo-based images of his wife, although the moody, meticulous paintings are lovely, indeed.

Norman Bluhm at Loretta Howard, through May 27
For those who know Norman Bluhm (1921–1999) either from his early Abstract-Expressionist or late Rorschach-blot canvases, this spirited show of 14 paintings from 1967 to ’74 is a revelation. Generous rounded forms swoop through open space propelled by all manner of mark, from juicy brushstroke to delicate splatter.

Josh Faught and William J. O’Brien at Lisa Cooley, through June 19
The textured works in this small show evoke Minimalist and Ab-Ex styles. Faught’s knitted and sewn assemblages—some adorned with, for example, a Valentine’s Day card from mom or a letter organizer made by a prisoner—complement the mixed-medium monochromatic canvases and ceramics of O’Brien.

Davis, Cherubini at Newman Popiashvili, through May 19
Taylor Davis and Nicole Cherubini, based in Boston and New York, respectively, have collaborated on ceramic-inflected sculptures for five years. Their pieces in this latest show—some wall-mounted, others dotting the gallery’s floor-create a more subtle, muted affair than the title, “Cobalt,” would suggest.