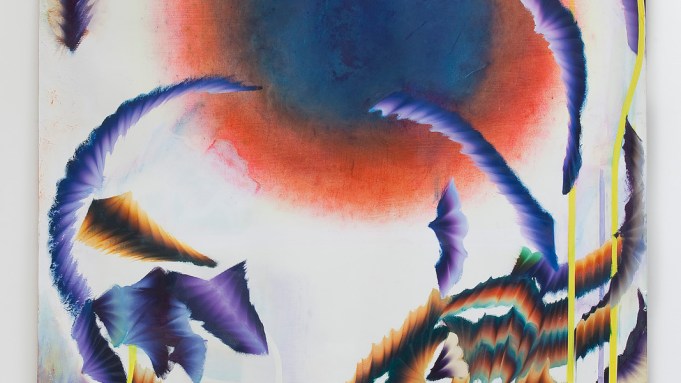 Every Thursday, A.i.A. editors compile The Lookout, a series of microreviews of compelling exhibitions on view in New York. Selections range from museum blockbusters to gallery shows to presentations in small nonprofits, from the Upper East Side to the outer boroughs. As a complement to our popular Best of 2015 series, contributed by art luminaries in New York, Los Angeles, Chicago, Houston, London and Japan, we’re presenting ten Lookout highlights of the past year in chronological order. Here’s to an art-filled 2016!

For MoMA’s first contemporary painting survey in recent memory, curator Laura Hoptman pulled together work by 17 artists, most of whom work with various abstract formal vocabularies ranging from the expressionistic to the starkly minimal. Each artist has multiple, large-scale pieces on view; Kerstin Brätsch’s monumental works on paper encased in glass lean against the gallery entryway like laid-back bouncers. The premise of the exhibition, which also includes Amy Sillman, Charline von Heyl, Joe Bradley and Rashid Johnson, is that contemporary artists continue to cull techniques from various 20th-century traditions, breathing new life into an old medium that appears more relevant than ever.

When a young dealer opens a gallery downtown you’d expect her to show artists from among her peers, but Bridget Donahue makes a big statement with her first show—a mini-retrospective of Lynn Hershman Leeson. In recent years, the New York and San Francisco-based artist has drawn increasing attention for her decades of perennially fresh encounters between technologies and bodies. Her last New York show was in 2008 at bitforms, which specializes in new media. Yet Donahue’s current presentation is grandly quiet in its focus on the old. It includes a scratched painting from the ’60s, along with photographs and performance documents reflecting the artist’s interest in the female body as an object of surveillance and voyeurism. New wallpaper bearing images of genetically modified organisms suggests the internalization of tech, while a projection that one must peer inside a black-box installation to see bends the viewer’s body to the artist’s will.

Although the third New Museum Triennial—titled “Surround Audience”—posits a world in which new technologies have collapsed such traditional binaries as private and public, self and other, animate and inanimate, the show is not the glut of video and computer screens you might expect. Selected by curator Lauren Cornell and artist Ryan Trecartin, the 150 works by 51 artists and collectives include paintings of humanoid heads warping amid patterned fields (Sascha Braunig); a 3-D-printed figural sculpture of artist Juliana Huxtable (Frank Benson); and an aquarium housing two coral-encrusted letters E (Antoine Catala), obliquely referencing an emotional relic from our analog past-empathy. The crowd-pleaser, however, is certainly Daniel Steegmann Mangrané’s virtual-reality rendering of a Brazilian rainforest, experienced through Oculus Rift goggles.

Nicole Eisenman’s Seder (2010) is the focus of the fourth entry in the Jewish Museum’s “Masterpieces & Curiosities” exhibition series, which aims to construct associative networks among the museum’s eclectic holdings. The painting hangs in a glass case—a semi-ironic nod to the function of display to produce, well, masterpieces and curiosities. Spotlit in the dim room, Seder is radiant. Eisenman has summoned a variety of painterly styles to depict the seder’s guests. Her scene therefore seems more like a collage of histories than a Rockwellian slice of life, and this impression is enhanced by the motley constellation on the wall to Seder’s right, with portraits plucked from every decade of the 20th century. A case on the opposite wall holds a selection of seder plates from the museum’s Judaica collection, including a simple clay-colored one split into wedges labeled “BITTER HERBS,” “NOT SO BITTER HERBS,” “EGG!” and so on, made by Eisenman herself.

Lutz Bacher’s art is described as “elusive” or “difficult” but it’s often funny, too. Empire (2014), the installation that dominates the ground floor display of her current exhibition, is a jubilant riposte to Warhol’s Empire (1964), the epically long shot celebrating a skyscraper’s severe singularity. Bacher took one shot of the edifice, too, but the image shoots from several projectors onto lifesize panes of glass that stand at a jumble of angles. The Empire State Building’s erection is impressive but the glass is flaccid—the panes are kept from toppling over by sandbags bases—and so the skyscraper goes limp in its multiplication, looking like identical tourist photos tagged on Instagram. This is not the solemn rectitude of Warhol’s 16mm film. Elsewhere in the street-level space, one finds the tomfoolery of stickers with triangle motifs on a fake stone wall and the latent slapstick of a floor strewn with marbles.

“We all end up in the clay.” This stark truth, spoken by seminal Delta Blues musician and self-taught artist John “Son Ford” Thomas (1926-1993) on his time working as a gravedigger in Mississippi, is powerfully conveyed in this exhibition of small clay sculptures. Many of these are skulls—portraits of the dead that often incorporate real teeth—as well as busts of George Washington and Abraham Lincoln. This exhibition at NYU’s 80WSE Gallery has rightfully received an abundance of critical praise, as it manages to offer moving and insightful reflections on the strength of individual creativity, the lived realities of African-Americans in the South, and the mainstream art world’s fascination with self-taught artists.

Dana Schutz plots space more tightly than she used to. Her older works tweaked realist illusionism by clumping volume in one corner while letting loose in another, but her new body of work abounds in rigid angles and geometric patterning. She’s painted pressurized environments that push at her canvasses’ surfaces and sides. In a series of charcoal portraits, the caricatured figures’ gazes and features are pressed eagerly, intensely outward. Fight in an Elevator (2015), which lends its title to the exhibition, is a jumble of limbs and smeared, stretched faces, glimpsed through the lines of half-open doors. The mise-en-scène seems to dramatize the act of painting itself, of paint gone wild in the plane set by the stretcher. The result distances the space of the viewer from the space of the work; Schutz’s paintings are obsessive yet aloof, beguiling but uninviting. You’re more of a voyeur than a viewer. The effect climaxes in As Normal as Possible (2015), where you’re staring down a kid’s dilated and reddened eyes under a flashlight’s broad beam, as a police cruiser’s lights blink behind him—you’re a cop.

Set in niches in the walls and plate-glass vitrines throughout the gallery, 35 abstract sculptures Ron Nagle produced between 1991 and 2015 stand poised for worshipful contemplation. The colorful, textural icons, almost all four by six inches, employ a variety of techniques, including slip-casting and hand-molding, as well as materials like glazed ceramic, polyurethane and epoxy. The West Coast artist’s works are radiant, playful and witty, though the joke itself is uncertain. In Quiet Wood (2015), for instance, skinny purple fingers poke through holes in a ceramic base. Orange polyurethane drips over the base, like a Nickelodeon kid’s show version of toxic waste. A selection of drawings and a group of bronze sculptures from Nagle’s “Hands On” series (1991) are also on view.

Offering a glimpse of a retrospective that toured several European museums in 2014 and 2015, “Robert Overby: Persistence. Repeated,” has the look of a tightly curated group show. The Los Angeles artist shifted styles, mediums and techniques frequently, creating an eclectic body of work that ranges from abject latex sculptures to copies of Old Master paintings. The through line in his practice seems to have been a fascination with the act of replication and the material nature of images. In the early ‘70s, Overby (1935-1993) made latex casts of doors, windows and other architectural elements. Hanging from the gallery walls, these drooping forms, in muted tans and browns, recall the work of Richard Serra, Bruce Nauman and Eva Hesse. Overby called the sensual pieces “Baroque Minimalism,” so it’s appropriate that they are presented here alongside copies of baroque-era religious paintings that Overby found and then cleaned and “restored.” Durer’s Madonna of the Siskin (1506) appears to have been something of an obsession. Overby reproduced closely cropped images of the face of this Madonna, and dozens of versions are included here. Each lithograph is faded and distorted in a unique way—one printed on plywood is capped with a fruit-basket hat—but the weird bulging eye of the Madonna is a uniform element. It’s a steady, if unnerving, focal point amid Overby’s diverse production.

The art world’s recent embrace of Tom of Finland now feels like a warm-up for the revelation of Robert Smithson’s early drawings. James Cohan calls its presentation of them “Pop,” but a more suitable title might be “Sub”—these crayon and pencil drawings respond less to Madison Avenue and Hollywood than they do to peep shows and corner newsstands. The characters who populate them would be at home on the pages of adventure tales, erotica and other genre comics. Pin-ups and bodybuilders, leathermen and salty cherubim pose in separate segments, lining the edges like saints in an icon. Exuberant, labyrinthine abstractions fill the center and animate the spaces between the figures, and are echoed in their colorful details. In a few instances playful touches connect the figures—an athletic man wearing only scuba gear fires a laser pistol at a chesty angel in garters and hose, its zigzag beam connecting with a nipple; a boy’s stream of urine trickles down the margin into a motorcyclist’s eager mouth—but most keep to themselves. While some might be tempted to see shadows of spiral jetties and rock boxes inscribed in these drawings’ geometries, it’s wiser to appreciate their pleasures for their own sake.