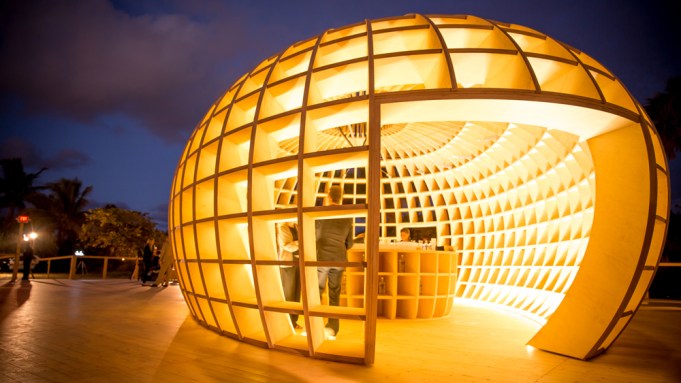 Miami Beach has no shortage of watering holes, and they’re active during the Art Basel Miami Beach (ABMB) fair, when buyers and sellers loosen up after long days at ABMB or at any one of nearly two dozen satellite fairs.

El Güiro, an art bar designed by Los Carpinteros (The Carpenters), was added to their number this year. The Madrid-based artist duo is made up of Marco Castillo and Dagoberto Rodríguez, both Cuban artists about 40 years old.

The roughly egg-shaped structure, approximately 40 feet long and 15 feet high, was made of pale-hued wood and was situated at the Miami Beach Oceanfront, across Collins Avenue from the Bass Museum of Art. Constructed from dozens of intersecting vertical ribs and horizontal shelves, with open space between them, the structure was internally lit, and at night it glowed seductively. Space inside was limited, but overflow crowds could await entry on a large wood platform on the sand.

At 8 tons, it is the duo’s second-largest project to date, according to their studio manager. It took seven days to assemble, and even the artists’ press representative couldn’t say how many pieces were involved. To account for the exigencies of tropical weather, it is tornado-proof.

Hundreds of pages of formulas and calculations were involved in shaping the wood ribs, a job that was completed by a Uniplan, a fabricator in Cologne, said Vadim Grigorian, with the Absolut Art Bureau, at a press conference. “I really don’t know how they built it,” Rodríguez admitted.

El Güiro was presented by the Absolut Art Bureau, which was, this year for the first time, a sponsor of the ABMB fair. (The liquor company also sponsored a press trip, which this reporter attended.) In the ‘80s, Absolut was active in arts sponsorship and has returned to the field recently after a long absence. At a celebratory dinner, Rodríguez said that during their art school days in Havana, he and Castillo devoured art magazines featuring Absolut-sponsored artists’ projects. “Back then, we never imagined we could do something like this,” he said.

Bars and taverns like New York’s Cedar Tavern and Max’s Kansas City have long served as hubs for artistic dialogue. Artist-designed bars are not new: Jeremy Shaw created The Kirlian for Art Basel in June (also sponsored by Absolut); Björn and Oddor Roth (son and grandson of Dieter) are designing a café/bar at Hauser & Wirth’s new gallery space in Chelsea, continuing a tradition of bars made by Roth grand-père. But El Güiro had some surprising inspirations, and was a long time in the making. The artists first conceived the project in 1995, Castillo said at a press conference.

The structure’s shape is inspired by, and the bar is named for, a Cuban percussion instrument made from the hollowed-out and dried shell of a gourd. In Cuban slang, the word also connotes a party.

Another inspiration for the design was the panopticon, a prison model devised in the 18th century by the English philosopher and social theorist Jeremy Bentham. The radial design would allow a centrally placed overseer to observe numerous inmates in their cells.

The center of El Güiro is occupied by the bartender. “We wanted to civilize the panopticon model for something practical,” Rodriguez told A.i.A. Strictly speaking, one could challenge the practicality of serving vodka drinks, but one could not question the drinks’ effectiveness. A chastened Rodríguez admitted to having gotten quite drunk on the deceptively fruity and spicy cocktails.

The bar’s namesake offering combined vodka with orange and carrot juice, ginger and coriander. (Teetotalers could request an alcohol-free version.) Also on offer were a Clove Sour (vodka, lemon and cloves) and a Telegram (vodka, chili and spicy salt). The recipes were devised by the artists and a bartender friend after a visit to a Madrid fruit and vegetable market, Rodríguez told A.i.A. David Harris Salkin, a collector visiting the fair from Chicago, described the drinks as the Art Basel Miami Beach version of a juice cleanse.

But the rehabilitation of the panopticon had a more serious echo in Cuban history, as critic Christian Viveros-Fauné points out in a brochure. “Though no true panopticon prisons have ever been built according to Bentham’s actual design,” he writes, “the closest such structures are the buildings that make up the now-abandoned Presidio Modelo on the island of Cuba.” That prison held Fidel and Raúl Castro after their failed attempt at revolution in 1953. After their victory in 1959, it housed dissidents, homosexuals, journalists and other perceived enemies of the state.

El Güiro served as the backdrop for several performances of musical compositions by Mallorcan composer Joan Valent. Fifteen musicians performed a 10-minute piece on Thursday evening. It started with a güiro and proceeded into an intense section, reminiscent of New York Minimalists, rich with marimbas. The mood softened with the introduction of a horn section in the final few minutes.

“Was it always intended to be a bar?” an observer wondered at El Güiro‘s launch. “Because I imagine it as a majorly awesome closet.” In fact, as Rodríguez said at the press conference, earlier conceptions imagined the spaces created by the ribs to be full of books, though one could just as easily imagine shoes.

Due to a late visa application, Castillo was unable to attend the fair, so Rodríguez was el solo Carpintero present for the launch. In the Delano hotel’s cushy media room on Thursday after doing all the talking at what he described as “a bunch” of interviews, he lamented, “I miss my partner.” But he gamely took questions.

Asked if there were many fights between the two artists during the project’s development, Rodríguez chuckled. “We fight all the time,” he said. “When we’re working, our ordinary mode is fighting. Ten years ago I used to freak out about this, but now I think it’s a good sign.”

Rodríguez said that the project had changed greatly as it evolved. “We wanted to make it 20 meters long and 7 meters high (65 by 23 feet). But what I like about it is that it’s between an object and a little piece of architecture. We were thinking in terms of sculpture and we got back a pavilion.”

But, he added, “our dream is to make it bigger.”

El Güiro was disassembled yesterday, but it may have a second life. “We hope to show it again, and not let it be only an Art Basel Miami experiment,” Rodríguez said, but didn’t offer further details.

“I arrived to the fair at night, and the first thing I saw was the Güiro,” Rodríguez said. “They were testing the lights. It was luminous, like a lamp. I fell in love.”