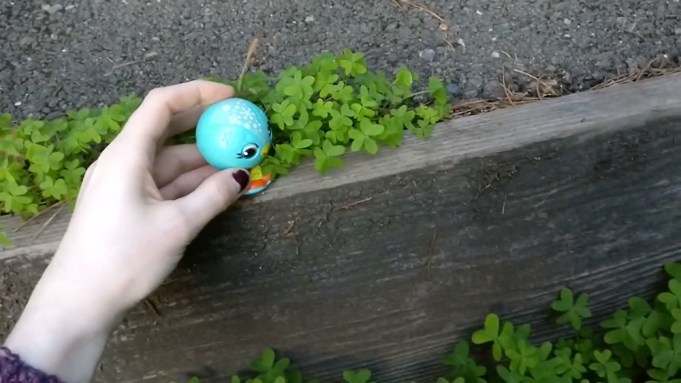 In Porpentine Charity Heartscape’s video Field of Clover (2019), a hand walks a bobbleheaded plastic bird through the grass. The blue toy is trotted up a wooden fence where it looks around, turning as if to see the hand that holds it. A fist punches it off the fence. The video is included in “Dire Jank,” a group exhibition organized by Porpentine on view at apexart in New York through May 18, and is projected in a loop on the gallery’s back wall. Right after the bird is knocked down, the video starts again.

Perhaps Field of Clover conveys the feeling of living while wanting to die. “I’m interested in bodies that no longer have the thing that was supposed to be their primary reason for living,” said Porpentine in a 2017 interview with the online magazine Autostraddle. “A crystal, a womb, reflexes, membership in an institution. ‘Useless’ women. What they are left with is themselves. How frightening.” In “Hot Allostatic Load,” published in the New Inquiry in 2015, Porpentine describes how marginalized communities replicate “disposability culture,” a condition in which those who lack clout are ostracized when they cease to benefit a social group. Porpentine’s analysis pays special attention to trans people. Anxious to belong, they often withstand abuse in queer communities, especially if they don’t have a family or home to go back to, and can thus get cycled in and out of various peer groups without anyone caring or noticing.

“Jank,” for Porpentine, is another avenue for exploring disposability. In her curatorial statement, she defines “jank” as “the inevitable disconnect between real life and the systems that simulate life . . . In this era of hyper-photorealism, everything leaks jank. The harder they try to simulate everything, the more weird and broken it all feels.” Games account for most of the work included in “Dire Jank,” with playable pieces by Porpentine, Tabitha Nikolai, and thecatamites at stations with keyboards and chairs. But there are videos, too. Flat-screen monitors on walls in the middle of the gallery play music videos by Devi McCallion. Black Cloud (2017) looks like it was made with Photobooth, the image-editing software that comes on every Mac. Footage of McCallion singing and shots of nature look solarized, or radioactive. I am trash, the images seem to say, and so is the planet. Words flash across the screen in counterpoint to the imagery, the way they do on karaoke videos. CLEAN AIR: a pulsating red waterfall. TRUE LOVE: a rotting coral reef. THIS WORLD IS STILL BEAUTIFUL BUT PREPARE FOR DEPARTURE. The words are like a mantra for when you feel bad, when the terror of mass extinction threatens to become trendy nihilism. McCallion wears a wide-brimmed hat over long, wavy hair. In Bloodeater (2017), she sings pop-screamo about feeling suicidal. “I hate every little choice I’ve made / So I’ve got no choice but to move forward hope one day life will be better . . . but everything just keeps getting harder.” The viewing setup may be a reclamation of gamer bro culture: both videos can be viewed from two square, comfy beanbag chairs. Bright iPod Shuffles, rescued from their planned obsolescence, offer three more songs to listen to.

Porpentine writes in the brochure that thecatamites drew what would become 50 Short Games (2014) “on index cards with markers during his lunch breaks.” These short, two-dimensional vignettes are operated by keyboard and mouse rather than a video game controller; you play them while seated on a junky plastic fold-out chair. Octopus Decision (2014) opens with a pixelated magenta octopus. PICK A SIDE, MOTHER FUCKER, the game demands. You’re given two choices: “I’m friends with the octopus” or “I’m against the octopus.” If you’re against the octopus, you shoot it. If you’re with the octopus, you become it. Nothing happens after that. You live as the octopus, floating around with other octopi.

Tabitha Nikolai’s Ineffable Glossolalia (2018) bears a closer resemblance to mass-market video games, with a three-dimensional space of buildings in a barren gray field that you explore from a first-person perspective. I couldn’t fully appreciate the work because I am bad at playing video games. I couldn’t find the doors to the big concrete structures; I wandered outside until accidentally discovering that you could step toward the walls and pass through them. Porpentine describes Nikolai’s game as “an architectural fusion of Borges’s infinite library with the Institut für Sexualwissenschaft, a key structure in pre-war Berlin’s progressive landscape, influential in early trans studies until fire and concentration camps consumed its books and inhabitants.” Blocks of text in a white font pop up as you walk through the burning archive. “You can see yourself trying to find your way in the darkness . . . Tied to you, as part of yourself, the corpse of your memories.” You’re the angel of history, virtual and stressed. Documents melt and smolder.

While Ineffable Glossolia’s three-dimensional visuals are more “lifelike” than the two-dimensional games by thecatamites, the installation jankifies Nikolai’s piece, which must also be operated via a desktop keyboard and mouse from a plastic folding chair. This jankiness could be a nod to the art historical status of video games, still frequently viewed as a commercial and thus inherently unartistic medium. On the other hand, the installation tactics seek to differentiate “Dire Jank” from commercial video games. This could be less of a way to show off individual countercultural cred than a pushback against the addictive “immersive experiences” advertised by game companies. As Porpentine argued in a 2017 Artforum interview, “the game industry tries to make something that someone can play forever. What they’re manufacturing is the promise that you will not have to consider the ruinous passage of time, if you just lock yourself inside a game.” Nothing in “Dire Jank” could be played forever. The games are short or circular narratives of futility. They don’t seek to addict you, nor do they inject inherent political worth in distraction. Instead, they explore the most popular topics in video games—death, killing, dying—in remarkably chill ways.

The 11 Best Beard Trimmers of 2023, Reviewed By Guys With Beards