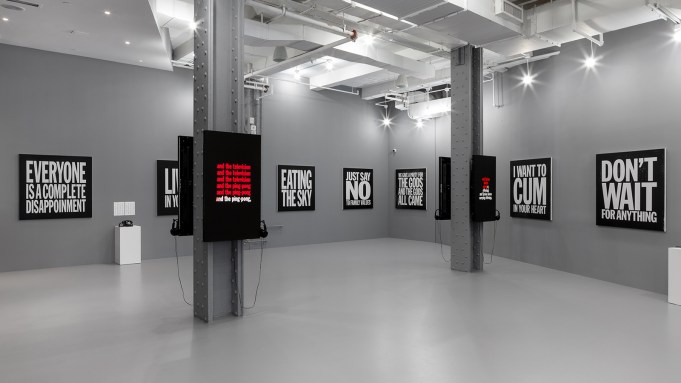 As its title suggests, “Ugo Rondinone: I ♥ John Giorno” is both a valentine from a sweetheart and an open invitation to explore the legacy of an iconic New York poet. In celebration of John Giorno’s eightieth birthday, Swiss artist Ugo Rondinone, who is his husband and occasional collaborator, has restaged and substantially expanded an elaborate exhibition of the same name that appeared at the Palais de Tokyo in Paris in late 2015. While the Paris version had eight “chapters,” this one has a whopping eighteen, spread across thirteen locations in Manhattan (most on view through late August) and featuring over twenty artists, Rondinone and Giorno among them.

Giorno is simultaneously muse and star of this exhibition, the mood and geography of which are as expansive as his own career. The many roles Giorno has assumed over the past several decades—poet, performer, model, visual artist, record producer, activist, Tibetan Buddhist—are all represented somewhere in Rondinone’s loving survey. Though each space offers a distinct view of Giorno as a cultural figure and maintains its own personality, the exhibition is united by Giorno’s unrelenting spirit: sex-positive, playful, generous, and always sincere. (It is also knit together by graphic designer Scott King’s “I ♥ John Giorno” logo, prominently displayed on wallpaper in the New Museum lobby and on posters in the windows of 80WSE Gallery and at the threshold of each participating institution.)

For those unfamiliar with Giorno’s poetry, Rondinone’s immersive video and sound installation THANX 4 NOTHING (2015), at Sky Art, a gallery in a midtown lobby, makes for a good introduction. From forty-eight black-and-white recordings of Giorno reciting his poem of the same name, Rondinone has created a perfectly synchronized three-hundred-sixty-degree viewing experience across four large screens and sixteen monitors, arranged in a circle so that viewers can watch Giorno from virtually every angle. Barefoot on a spare Paris stage, sometimes in a black tuxedo and sometimes a white one, Giorno looks like a vaudevillian prophet, the white of his hair almost preternaturally bright. His poem, a list of appreciations written for the occasion of his seventieth birthday, offers a slant autobiography—not just a recollection of his life, but an invocation of the past made vivid in the present. Of his lovers (“beautiful brilliant men with brilliant minds, great artists”) Giorno says, “may they all come here now and make love to you, if you want”; of his late friends (“Allen, Brion, Cookie, Jack”), “may they come back from the dead and do whatever is your pleasure”; of Warhol, “may Andy come here, fall in love with you and make each of you a superstar.” Eventually bringing us all the way back to the “primordial wisdom soup” from which we came, Giorno speaks with the authority of someone who has lived long and with intention. Yet he remains an improbably youthful presence, bouncing ever so slightly on the balls of his feet as he intones over the moody musical score. At the film’s finish, when he bows, lights a joint, and takes a single satisfied drag, it’s impossible not to feel grateful to have stepped inside his poem.

Outside the installation, brightly colored facsimiles of pages from Giorno’s personal archive paper the walls from floor to thirty-foot ceiling. The full collection—over fifteen thousand documents dating from 1936 to 2016—is organized into eighty tomelike albums, one for each year, distributed on tables in the lobby. It might take months to flip through all the binders—Giorno is a meticulous collector, particularly of his own publications and press—but fans of the downtown poetry scene will be tempted to try. Though Sky Art’s location, on the ground floor of a seventy-one-story luxury apartment complex in Hell’s Kitchen, feels somewhat at odds with Giorno’s underground milieu, it’s worth the trip for initiates and neophytes alike.

Further south, at the Swiss Institute in Tribeca, “Sleep and Other Works” spins an origin story of Giorno as artist’s muse and subject. Andy Warhol befriended Giorno and made him the star of Sleep (1963), his first long film. (Humorously, a whole section of Giorno’s archive is dedicated to its mostly unfavorable reviews.) Though Sleep gets top billing here, prominently projected onto the Swiss Institute’s back wall, it is far less revealing than the shorter films on view. Warhol, fearing Sleep would be read as gay, sublimated his desire into the extreme contrast of the cinematography and the sheer length of the film, but he made no such efforts to obscure his affection for Giorno in screen tests and brief home movies. Whether Giorno is washing dishes naked, wrestling with a female friend, or reclining in a hammock, the camera lingers on his svelte body with a lover’s unshakeable focus. In Untitled (John in Country), 1963, even the empty bed he has risen from and the shoes he has discarded are awash in erotic attention.

“I ♥ John Giorno” is full of reverberations. At Howl Happening, Pierre Huyghe’s 1998 film Sleeptalking offers both the backstory and a reprise of Warhol’s Sleep, as well as a moving commentary on age and the passage of time. Inside Rirkrit Tiravanija’s plywood pavilion at The Kitchen, among the ten hours of footage in his untitled 2008 (john giorno reads), you can watch Giorno read the title poem from his book Grasping at Emptiness, a 1978 collaboration with painter Richard Bosman; the manuscript of paired poems and images is on view at the Bertha and Karl Leubsdorf Gallery at Hunter College. At Red Bull Arts New York, along with animated versions of Giorno’s sound poems and rotary phones that play recordings of his celebrated Dial-A-Poem project (now active again at 641-793-8122), there’s a looped single-channel version of Rondinone’s THANX 4 NOTHING—just don’t mistake it for the one at Sky Art.

If this sounds overwhelming, well, it can be, but repetition and excess have always been central to Giorno’s work. Though it’s next to impossible to hit every location in the span of a single day (you should devote three or four days if you want to absorb it all), the exhibition is even greater than the sum of its parts, precisely because of how they reflect and illuminate one another. The ostensible outlier show “John Giorno and Tibetan Buddhism,” featuring Giorno’s home shrine and works from the Rubin Museum of Art collection, is intelligently housed at 205 Hudson Gallery, alongside material referencing the AIDS Treatment Project, the direct-action program Giorno founded in 1984 to provide financial support to people living with AIDS. Peter Ungerleider’s 1995 short documentary Loving Kindness (on the AIDS Treatment Project, Giorno, and his Tibetan Buddhist practice), along with the AIDS Treatment Project literature blown up on the walls, make it clear that Giorno’s Buddhism has not only fueled his activism but also informed the rest of his oeuvre. “My intention is to treat a complete stranger as a lover or close friend,” he writes of the Project’s mission in one of the reproduced documents. “[I]n the golden age of promiscuity, we celebrated life with glorious substances, and made fabulous love with beautiful strangers. Now that life is ravaged with AIDS, we offer love from the same root, in the form of boundless compassion.”

You feel that sense of compassion everywhere in “I ♥ John Giorno,” not just from Giorno himself, but also from the various artists who have painted, photographed, filmed, and, in many cases, loved him. The possibility that any relationship can be a loving one—indeed, that they all might be—suffuses the exhibition, and it’s a comforting premise whether or not you’re convinced. For a lifelong depressive who has, as he confesses in THANX 4 NOTHING, felt “like suicide everyday of [his] life,” Giorno possesses a stunning optimism.

Reality, of course, doesn’t always cooperate. Trekking around Manhattan to see this exhibition, I was struck by how little it resembled the city conjured in the work of Giorno and his contemporaries, especially in the slick new venues like Sky Art and Red Bull Arts New York. If there is something anachronistic about the version of New York that “I ♥ John Giorno” asks us to visit, it is both a testament to Giorno’s enduring appeal and a bittersweet reminder of a bygone era when the borough it stretches across was still a place for artists.