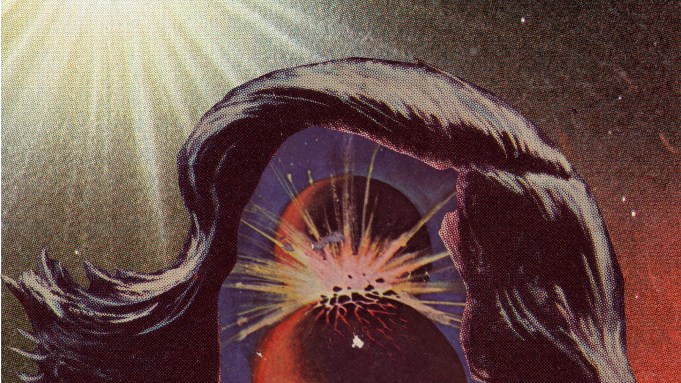 In the three years since the artist team of Justin Lowe and Jonah Freeman have shown in New York, a lot has changed-not the least of which being the shuttering, by New York City officials, of all government-run Off Track Betting (OTB) parlors in 2010. The artists, whose 2009 show at Deitch Projects, “Black Acid Co-Op,” featured an exploded crystal meth lab, have tapped OTBs—state-run facilities that allowed glassy-eyed gamblers to bet on horse races in the middle of New York City—for a comeback of sorts. The gambling parlors play a starring role in the artist’s latest multi-roomed installation, titled “Stray Light Grey,” which opens Sept. 13 at Marlborough Chelsea.

The team’s newest installation aligns with their former work in its devotion to realistic settings that morph into the hyper-real, and eventually the fantastical. “Black Acid Co-Op,” shown on Wooster Street, began with a room that improvised a Canal Street cubbyhole one might find a few blocks south; at its entrance, “Stray Light Grey” appears to be just another blue chip Chelsea gallery exhibition. “With all these projects, the way we like to design it is that you’re starting off with something that’s not so dissimilar from the situation you might be in. As you move through the rooms, there’s this slow dissolve into something otherworldly,” says Freeman. “You’ll have this sense of familiarity, but a lot of the details switch to something else.”

Freeman and Lowe have become well known for precisely this type of immersive, locale-driven situation. In 2008, the duo, with artist Alexandre Singh, showed “Hello Meth Lab in the Sun,” the precursor to “Black Acid Co-Op,” at Ballroom Marfa-playing on the area’s nascent surge of crystal meth production. In 2010, the team created “Bright White Underground” at the legendary Buck House in Los Angeles, which played on Southern California’s culture of drug and psychology-based mind expansion. This year’s “Stray Light Gray” replicates a similarly seedy aspect of city life in New York.

“OTBs and check cashing places-those were very much the fabric of the New York city that I moved to,” says Freeman, speaking to A.i.A. during the construction of Stray Light Grey. The artist, who came to New York in the mid-nineties, cited location as a key jumping-off point for each project. “Whenever we start to do the project, we always think about the place we’re doing it. Here, we were trying to riff off of things that may have been in this neighborhood, and have moved to obsolescence. But we’re not making an exacting verisimilitude of an OTB. We’re taking OTBs and twisting them into our own world.”

The project begins as one enters the gallery, the expansive main space having been subdivided into many smaller rooms. The first area has been reconstructed as a dramatically smaller rendition of the full Marlborough gallery. The walls are hung with paintings and collage-teasers of sorts, say the artists. “All of the artwork alludes, in a symbolic way, to what the viewer will later experience in the installation-sort of like a table of contents,” says Lowe. Rectilinear lens-like sculptures are set in the walls like peepholes, and allow viewers a glimpse of what lies behind them: the installation proper. “The viewer might not be sure if these are a Duchampian trick [referring to the artist’s 1946-1966 Étant donnés] or if there really is a larger world behind them.”

Things get progressively weirder, as normal rooms-an art storage backroom, a gallery bathroom-leading to far less expected ones, including the OTB. While its décor harkens the bygone OTB—traditional forest green walls, tickets strewn on the floor—the video monitors that usually display horse races have been repurposed by the artists to display a bizarre video. Fast food characters including Grimace, the Burger King and Jared from Subway are given new roles. “They’re all engaged in this hilarious orgy,” says Freeman. As stand-ins for racehorses, the characters perform their own competition of sorts. Says Lowe, “We wanted to have something that kind of dislodges your normal expectations, and begins to spark these little narrative flares.”

One room is a futuristic plastic surgery center, where one could get a little lift with the casualness of a manicure. Another room mimics Hong Kong’s now-demolished Kowloon Walled City. The real “city” was a social and architectural triumph of will: a population of 50,000 people, many of them ostracized from Hong Kong society, living and working in a makeshift development run by the Chinese mafia, wherein alleyways were roofed and boarded to become interior hallways, and no legalized electrical or water system existed.

Throughout the labyrinth, the artists create associations between disparate rooms with two symbolic materials-crystals and cacti-which appear in several sculptures and images throughout the installation. “We’re thinking about alchemy in a modern context, and about matter that is believed to have some sort of power outside of its materialness,” says Freeman.  “Crystals have an effect on the energy in their environment, and 80% of cacti have a psychotropic effect on human beings.” Within the exhibition, a “brain room” is covered in wall-to-wall electronics, which have been coated in snowy salt crystals.

The final room is a virtual high church of crystal: an imagined museum devoted to art deco, with a crystal floor and extruded crystal lamps. The anachronistic elegance of this room, set against the OTB and the Kowloon ghetto, is intentional, and part of the artists’ quest for interconnection. “In a number of the rooms, there’s these opaque economic systems going on,” says Freeman. “The idea was to get a range of systems, from art to plastic surgery, celebrity to OTB. The project starts off highbrow-in the gallery-and ends highbrow.”