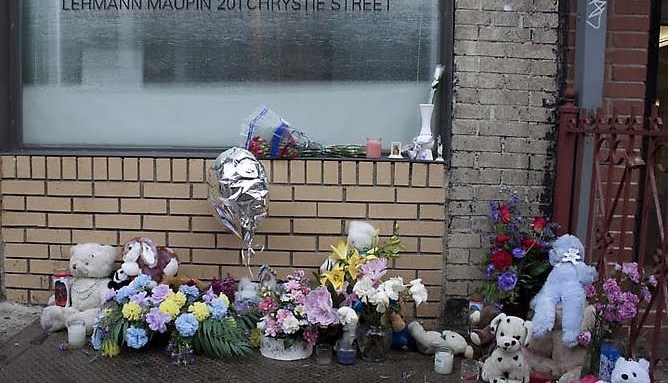 Lush Life, Richard Price’s 2008 novel based on a real unsolved robbery-shooting, is full of all the peculiar inflections of cop talk that made the HBO drama he co-wrote, The Wire, such a hit. Considered by some the Raymond Chandler of our generation, his gritty dialogue and urban characters are tempered by postmodern equivocation, where criminals and police alike face questions of culpability.

The novel takes place in New York’s colorful Lower East Side, and is as much a meditation on that neighborhood’s fluctuation as it is a crime story. It’s a fascinating read, and for curators Omar Lopez-Chahoud and Franklin Evans, the perfect foil for a multi-venue exhibition to showcase the latest group to call the neighborhood home—the gallery world. Also titled “Lush Life,” the exhibition takes place in nine galleries, each organized to correspond to the novel’s nine chapters. Spanning emerging and more established galleries venues, it’s a temporary and productive alliance befitting its turbulent neighborhood.

JANE HARRIS: What inspired you to use Richard Price’s 2008 novel, Lush Life, as a foundation for curating an exhibition?

FRANKLIN EVANS: Omar and I were in discussion about curating a multi-venue exhibition on the Lower East Side considering the neighborhood’s new gallery community. We settled upon a book as the way to organize the exhibition, to allow each gallery to have a unique quality such as a chapter does within a book. We also wanted the book to reflect the neighborhood and Richard Price’s Lush Life offered what we initially hoped for: location, contemporaneity, chapters with independent conceits, an investigation of community. This latter issue of community went much further in Price’s novel than our initial premise of community and cooperation among galleries, artists, curators. Price critically considers the densely packed yet isolated communities of the Lower East Side, not working together but rather ignoring one another. This criticality of community has clear parallels to other communities and thus could be used in exploring the art and art gallery community there.

HARRIS: This analogy you suggest between the factions, so-to-speak, of the current Lower East Side and in the art world is interesting. Can you elaborate?

EVANS: This is a hard question to answer explicitly and specifically. Although a cooperative spirit can be felt in the neighborhood’s galleries, it is not divorced from politics and power. And it seems overly optimistic and possibly naïve to expect anything otherwise. Despite the political dynamics of the art world, Omar and I are grateful to have worked with nine dynamic galleries to realize a rather logistically and conceptually complex project.

OMAR LOPEZ-CHAHOUD: The story is a fiction based on actual events, places and people. Richard Price spent a lot of time in the area to research and write this book. He was interested in capturing the current landscape of the neighborhood which includes the hipsters, the Dominicans, the Puerto Ricans, the Chinese, and most recently, the galleries. Lush Life was an inspiration for Franklin and I because we had the opportunity to work with a book that connected the dots between the past and the present of the Lower East Side.

DANA LEVY, STILL FROM SILENT AMONG US, 2009. COURTESY INVISIBLE-EXPORTS, AS PART OF CHAPTER 3: FIRST BIRD (A FEW BUTTERFLIES)

HARRIS: In the press release for “Lush Life” you talk about how Price’s novel was a vehicle for “the consideration of community as voices compete for, ignore and occasionally share the same physical and conceptual space.” Can you expand on this, particularly the idea of “conceptual” space, and whether this an oblique reference to issues of race, class and gentrification.

EVANS: “Conceptual space” does encompass race, class, gentrification but even more openly it reflects the non-physical space that we can define as both individual and collective consciousness. So it is inclusive of race and class but also of the influences that impact people’s relationships and sense of identity. What is particularly interesting to me is that different individuals with different socioeconomic backgrounds can experience the same conceptual space. In Price’s novel that’s the temporary hubris experienced both by the intoxicated Steven Boulware and the gun-empowered Tristan.

HARRIS: So in a sense you’re using the phrase “conceptual space” to refer to the mind, and the subjectivities of perception?

EVANS: Yes, very much and also to the possibility of sharing a mental moment across time like when Price’s Eric Cash is hiding out in the basement at his place of work, the bar Berkmann’s, and sees on the wall the Yiddish phrase, “Gedenken Mir” (“Remember Me”) in both the past and present voice that simultaneously declares and doubts its place in this world.

LOPEZ-CHAHOUD: The Lower East Side is a gentrified hipster leisure zone with boutiques and restaurants, as you mention, but, don’t forget that in the midst there are other communities that still share the same physical space. They struggle to survive and preserve their cultures and histories. They want to partake and not be displaced.

HARRIS: How do you think your show includes or engages these communities, if at all?

LOPEZ-CHAHOUD: Our intention was to present work that talked about these forgotten communities in one way or another. For example, the video work of Nanna Debois Buhl talks about these issues directly, and the Robert Beck shrine outside Lehman Maupin gallery, which, because it is in a public space, can be mistaken for a real one. It reminds people that there is still racial tension in this neighborhood.

EVANS: Right, most of the work addresses the idea of forgotten communities rather than communities specific to the LES and/or its past. There is Jackie Saccoccio’s painting, which links to the mid-century New York School (although a not-forgotten community, it may be a slowly eroding one), and Karina Skvirsky’s photographs of her Guayaquil childhood, which serve as memorials although she chooses to misrepresent the images with false textual information from the present to recreate this past. Similarly, Patty Chang’s video, Gate Remains Partially Impaired highlights her immigrant father’s return to his childhood home region, his attempt to remember, and his misremembering of the land as unchanged-even though much change had taken place. LEFT: OLIVIER BABIN AND HAROLD ANCART, HAPPY DAYS, 2010, COURTESY SALON94 FROM “WOLF TICKETS”

HARRIS: While the show has been positively reviewed, most thoughtfully by Holland Cotter in the New York Times, others like the blog ARTINFO have claimed: “Ultimately, it is hard to find the connection between most of the works in the exhibitions and the novel, which amounts to a wasted opportunity.” What do you say to such criticisms?

EVANS: I understand that view to have come from ArtObserved.com. All reviews, positive and negative, are subjective. It is sometimes clear when a reviewer allots more time to criticality, but there is always a preference for and against something or other. In the case of artobserved.com, it seems the reviewer had a preference for direct illustration of Price’s novel.

HARRIS: Do you mean he expected more direct references to the narrative itself, and the characters, or to the book’s main theme: the issue of community, and what constitutes “neighborhood” in our post-9/11 Recession-era age?

EVANS: More of the former, I gathered. The writer refers to two pieces in the show at Salon 94, “Chapter Seven: Wolf Tickets.” In both cases, his reading was more directly illustrative – Patrick Lee’s “Big Top” portrait as someone who would be “at home in the LES streets” and Erik Benson’s painting of new development and graffiti as an illustrative stage for the neighborhood. Although that is a viable reading of the works in Lush Life, these were not the primary reasons we selected these pieces. What we responded to was that both artists’ work—Lee’s aggressive tattoo, and Benson’s graffiti—conveyed a form of false intimidation (a central theme of the chapter). In another review (the Wall Street Journal), there was a preference for less direct illustration. What I remember discussing with Omar at the outset was that we wanted to avoid direct illustration and to more actively engage with the themes of each chapter, which Price made quite available through the suggestive chapter titles alone (“Wolf Tickets” as false intimidation and its impact on communities). However, we did allow for key aspects of the novel that we thought were important to illustrate, such as the apparition in “Chapter 1: Whistle,” which powerfully presents a varied experience of a temporary event on the Lower East Side and demarcates the different experiences by socioeconomic background.

HARRIS: How did you decide on what were key aspects, and how much did the work and artists you were interested in including shape these choices?

EVANS: Reading the novel, Omar and I separately compiled a list of elements that moved through the narrative. For example, my list included: the gun as whistle, the apparition, the various fictional bars, the synagogues, the collapsed synagogue, the interrogation, the terrifying birds of Chapter 3, the butterflies as emotion, the marker of gentrification in the Landsman Hotel, the Tombs, Seward Park, the shrine, the 7th Precinct, the media, the cops, the complex demographic history, the boutiques, the 24/7 stores, the drug trafficking, the housing projects, the Chinese funerary money, the sentencing, the faux LES. We had many meetings to discuss artists and ideas and once we had settled on how we would approach each chapter, we sent an email to Richard Price to share our chapter interpretations with him. I sensed that although he was excited that we were using his novel to organize a large art exhibition, he was not interested in influencing our curatorial choices. I read his email reply to our summaries as his kind approval.

It seems that when we included a specific narrative illustration it was to find an artist that could allow for such illustration.  Moreover, we hoped that the illustration would be more than just a singular illustration. In some cases, I think it worked very well, as in the case of Judi Werthein’s Apparition, which Omar found. Not only is it an illustration of the narrative event in Chapter 1, it also serves as marker of re-empowerment of a displaced community that complicates the image of the Virgin, parallel to the complication of the histories of cultures and morphing and erosion of singular perspective of identities and events.

LOPEZ-CHAHOUD: We wanted to create an opportunity for the viewer to re-interpret the story in a much broader sense. The intention of this exhibition was to facilitate a more open interpretation of what happens in the real and fictional Lower East Side.