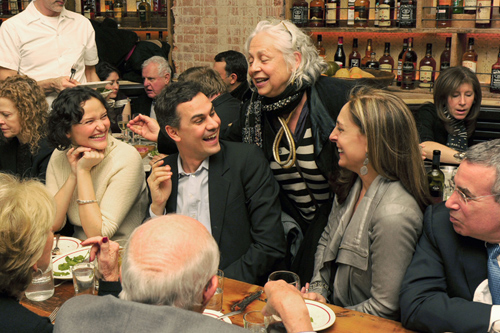 Hometown favorite Lynda Benglis was the toast of the Bowery Tuesday night. She started the evening at Salon 94 Freemans to inaugurate “Fountains,” her show of functional bronzes, before heading over to the New Museum for the opening of her eponymous 40-year retrospective. New York marks the last stop for the touring exhibition, organized by the Irish Museum of Modern Art, Dublin, where it debuted in late 2009.

“This is an exciting moment for Lynda. She’s having her first major museum retrospective in twenty years across the street from her studio, which is very symbolic,” said Adam Sheffer of Cheim & Read, who represents the artist.

For the past three decades, Benglis’s studio has occupied the top floor of the famous 222 Bowery building, where poet  John Giorno maintains writer William S. Burroughs’s former bunker. Benglis touched on the significance of the New Museum’s proximity to her workspace: “In fact many of these works were [prepared there]. Some of the gold mermaid pieces [e.g. Minos, 1978] were definitely made there, although at the time I was making them in Los Angeles, too…”

Benglis trailed off just as friend and fellow artist Kiki Smith rushed up to say hello. “I’m such a big fan, and I love every period of her work.” she said. “She’s a huge inspiration.” Also present were sculptors Rachel Feinstein and Rachel Harrison, both substantially influenced by Benglis in different ways.

On view is a sampling of vibrant, biomorphic forms—many made of poured industrial materials like latex or rubberized foam—familiar to longtime fans. The second floor galleries are filled with large pour paintings lying on the ground like psychedelic rugs and bulky dramatic works extending far off the wall.

One crowd-pleaser is Phantom (1971), on view for the first time since its original appearance at Kansas State University 40 years ago. It comprises five large wall-mounted polyurethane cascades replete with phosphorescent particles, causing them to glow an unnatural yellow-green under black lights. Reaching out toward you in the darkness, they seem to alternate between ghoulish melting zombies and benevolent magical waterfalls, frozen mid-flow. The New Museum’s Associate Director and Director of Exhibitions, Massimiliano Gioni, described Phantom to us as “a painting in space that turns into a sculpture that becomes an installation.”