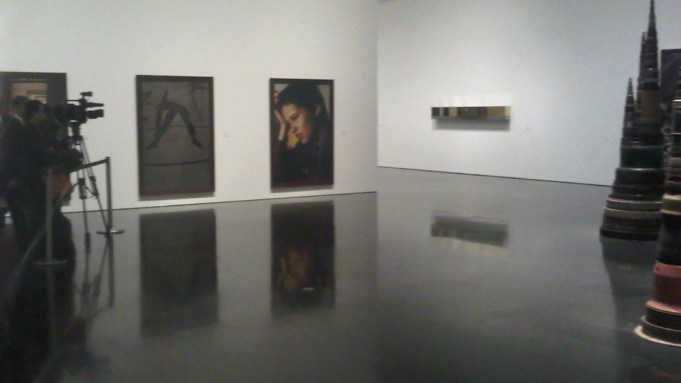 In cooperation with the private contemporary collection of Spanish bank La Caixa, Barcelona’s MACBA last week unveiled an exhibition of some 350 artworks, titled  “Volume!” [through Apr. 23]. The combination of  work by local stars with international ones resulted in a neat historical overview intended to appeal to a wide audience. MACBA director Bartomeo Mari told A.i.A. that he wished “to dispel the myth that contemporary art is difficult to understand.” But some art cannot be tamed. Before a beautifully installed Robert Morris felt sculpture, House of Vetti II (1983), a pleasantly surprised banker informed me, “It looks like a vagina,” before shuffling along.

The Spanish king Juan Carlos canceled his appearance at the opening, but Carmen Cervera, the Baroness Thyssen–Bornemisza—”a friend of the King,” I was told—was among the dozens of VIPs in tow at the preview. Chilean-born Harold Berg, who since this summer has loaned his private Gordon Matta-Clark collection to MACBA, was also there. He rubbed shoulders with French art connoisseur Philippe Méaille, who recently loaned a staggering 800 Art & Language works. Sharon Avery-Fahlström looked relaxed after overseeing the meticulous installation of her late husband’s Garden—A World Model, 1973, which only months earlier was on view at Aurel Scheibler’s Berlin gallery.

The five-year partnership of museum and bank began in July. Now, the two institutions’ contemporary art collections are managed under a single advisory committee, with a coordinated works acquisition policy. The arrangement has been met with a mixed response. “It seems that the daring days of MACBA are at least temporarily over,” one critical visitor told A.i.A. He cited the strong and adventurous show “Are You Ready for TV?” curated by Chus Martínez, as a thing of the past.

Nonetheless, works from local greats Joan Miró, Miquel Barceló and Juan Muñoz were shown alongside international big names such as Tony Cragg, James Coleman, Gerhard Richter and Joan Jonas, valorizing the Spaniards within the history of contemporary art. One highlight from the La Caixa collection was Bruce Nauman’s 1990 installation Shit in your Hat—Head on a Chair. Together with Samuel Beckett’s video installation Not I (1987) and Pierre Bismuth’s projection Postscript/The Passenger, (OV) (1996–2010), these are works that use audio to give history a new tune.