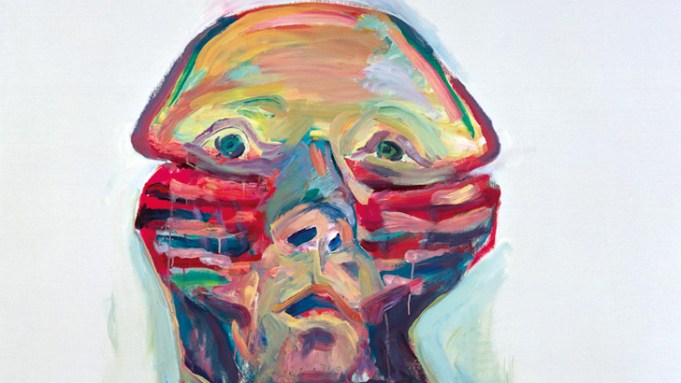 The first U.S. museum survey of Lassnig’s paintings and films exposes an artist adept at outrage and self-laceration.

MARIA LASSNIG HAS SPENT the past 60 years making paintings that show us exactly how she feels in her own skin. In what she calls her “Körperbilder” or “body awareness paintings,” Lassnig depicts only the parts of her body that she can actually sense while working. If she doesn’t feel the top of her head (and the evidence suggests she often does not), it is completely absent from her self-portrait. Even arms go missing—oddly enough for a painter at work—and are replaced by vestigial knobs that sprout from the torso. While it is reasonable to expect that her lifelong insistence on this strategy would have eventually led to a rather homogeneous output, in fact the opposite is true. From her earliest abstract drawings to symbolic self-portraits of the 1980s to the mostly representational images of the past decade, Lassnig’s oeuvre is formally and conceptually diverse precisely because she insists on her physical body as primary source. This position has given her license to freely hybridize figuration with abstraction as a means toward full sensory and psychological expression, and has engendered some of the most darkly perceptive imagery of the past century.

“Maria Lassnig,” currently at the Contemporary Arts Center in Cincinnati, is the first American museum solo show for the prolific 89-year-old artist. Although she has exhibited widely in Europe since the late 1940s, Lassnig’s work has not been seen frequently in the U.S. The exhibition, which was organized by the Serpentine Gallery in London and curated by Julia Peyton-Jones and Hans Ulrich Obrist in association with Rebecca Morrill, features almost 30 canvases, most of them, remarkably enough, completed between 2001 and 2007. The exhibition also includes all seven of the artist’s films, dating from 1971 to 1992. At the CAC, Lassnig’s paintings are a revelation—vivid, ungainly works that fairly rupture the austerity and compression of the Zaha Hadid-designed galleries. Director and chief curator Raphaela Platow has spent many years studying Lassnig; her deep empathy and knowledge are evident in the witty and nuanced installation.

Lassnig splits her time between Vienna and Carinthia, in southern Austria, where she was born in 1919. In a videotaped interview conducted by Obrist for the exhibition, Lassnig explains that the only artworks she knew before arriving at the Academy of Fine Arts in Vienna in 1941 were “paintings of peasants” sanctioned by the Nazis. She traveled for the first time to Paris in 1951, on a scholarship. There she met the Surrealists André Breton and Benjamin Peret, and became friends with the poet Paul Celan. Her early encounters with Surrealism, Art Informel and Gutai left still-discernible influences in her work as well as her thinking. Approaching 50, Lassnig moved in 1968 to New York City, where she lived for a decade and produced six of her films (very little else is known about her time there). She was invited to return to Vienna in 1980 as chair of the Academy of Applied Arts—and was the first female professor of painting at a German-speaking university.

Although nearly 20 years older than many of the Viennese Actionists, Lassnig seems to have shared their proclivity toward a morbid self-scrutiny. Austrian artists during the 1960s, like their American counterparts, rejected the commodity-based art economy of the past, creating happenings and performances as a means of waking up a somnambulant postwar society. Hermann Nitsch and Otto Mühl staged orgiastic theatrical events involving quasi-religious rituals and mock (and some real) violence. Rudolf Schwarzkogler and Günther Brus went even further, performing painful acts of self-mutilation in front of the camera. While more private and less histrionic than her compatriots, Lassnig shares the Actionists’ interest in how repressive forces affect the corporeality of the artist. Within this context, “body awareness painting” might be construed as a kind of performance on canvas. In addition, like the American artist Lee Lozano, Lassnig seems to have spent much of her career groping for tangible images—both representational and abstract—to convey the experience of being an ambitious woman artist caught between outdated societal mores and the mirage of liberation.

It’s not surprising, then, that self-portraiture, Lassnig’s genre of choice, is where the artist is at her most ruthless and most humorous. You or Me (2005) features a naked old woman (Lassnig) sitting alone in a white, blank ground. Her eyes are wide open, and her legs are spread, exposing her bald pudendum. Quick scratches of bright blue and green demarcate the edge of her fleshy body. With one hand, she points a gun directly at the viewer; with the other, she holds a second gun to her own head. From across a long gallery at the CAC, this murderous crone stares (and aims) at her bewildered doppelgänger, the self-portrait in Language Grid (1999). Here, raw red and pink strokes cut across a face that has been stripped of its skin. Resting on a rough scaffold instead of a body, the artist’s colossal head looks like that of some futuristic sphinx.Throughout the late self-portraits, Lassnig makes a leitmotif of the sometimes unsettling similarities between childhood and old age—the hairless pudendum, for example, or poses that describe irrational fear, an emotion experienced disproportionately by both young girls and old women. Visibly terrified, Lassnig peeks out from behind a large stuffed animal in My Teddy Is More Real Than Me (2002); it’s as if her terror has literally turned her body blue. Lassnig’s willingness to appear both vulnerable and foolish is alternately exhilarating and frightening; wide ranges of emotion are effectively conveyed by her fast, direct paint application as well as a brutally descriptive manner of drawing. Self-Portrait with Cooking Pot (1995) shows the artist blindfolded with a bulky, white, bandagelike cloth, her head capped by a small pan that looks more like a toy helmet than a cooking vessel. Here the combination of snaggletoothed mouth and jaunty pigtail evokes a particular intransigence that is often displayed by the very young and very old alike.

Some of the most inscrutable yet powerful works in the exhibition—all of them set apart by the artist’s use of bright, corrosive yellow grounds—push the conventions of figure painting from expressionist into surrealist representation. In 3 Ways of Being (2004), Lassnig portrays herself in triplicate as a psychedelic chimera. The Lassnig on the left is round and rosy yet deformed, like a baby doll without arms. The artist appears again in the center of the canvas, sitting disconsolately, a bright red, armless woman sporting a pig’s snout and a devil’s tail. At the right, a quick outline of the artist (this time with arms) looking nonchalantly out into the distance completes the trio. Even stranger is Photography Against Painting (2006), a brilliant work in which a cowering little pile of flesh wields a jeering Lassnig mask to taunt a leggy eyeball/camera.

With their simply drawn animation, Lassnig’s films are more overtly political and didactic than any of her paintings. Like many feminist artists of the 1970s, such as Mary Beth Edelson or Yolanda Lopez, Lassnig uses humor in these works to examine the construction of gender and to critique women’s role in the home and society as well as in art history and religion. In Art History (1976), the artist re-envisions the “seminal” moment in Michelangelo’s Sistine Chapel in which God reaches out to touch Adam; in Lassnig’s version Adam morphs into a large gorilla and God the Father becomes a goddess. In the one film she made in Austria, Kantate (1992), Lassnig returned to similar themes, combining live action with animation. Singing the story of her life as a woman artist, Lassnig stands in the right side of the frame, as summary line drawings furnish appropriate backdrops for each triumph and travail. Comic relief is provided by the artist’s manic costume changes—in the course of several minutes she goes from innocent Catholic schoolgirl to conscientious art student, punk, cowboy, jester, the goddess Diana and finally a grande dame in flowing red chiffon. Perhaps it is the easy popularity of film, or perhaps its inherently narrative structure, but somehow the medium frees Lassnig to externalize her experience through far more accessible imagery than that of her paintings.

As she turns to subjects other than herself in later canvases, Lassnig’s politics become darker and more misanthropic. A rotund, balding man appears as the menacing protagonist in three paintings from 2003. Clearly based on a live model, the man is pathetic and convincingly human, while the girls he threatens in two of the three works are grotesques: a faceless puppet in Bugbear and, in Don Juan d’Austria, a young woman lying supine and passive in his big mauling hands, her dematerializing legs wrapped around him. In The World Destroyer, he mashes a deflated, fleshlike toy globe. Moments of exquisite drawing alleviate the queasiness elicited by these paintings. Lassnig seems to regard all human beings as fundamentally unevolved; she treats both their petty offenses and major transgressions with a mix of gravity and irony. In Madonna of the Pastries (2001), Lassnig depicts herself nude, grimly guarding an array of pastel-colored confections, as if to defend them from the certain advances of some unseen ladies in her kaffeeklatsch.

In her early 80s, Lassnig began painting from photographs for the first time in her life. Inviting several young people from her village to pose in her darkened cellar, she photographed them horsing around with large sheets of clear flexible plastic. After more than 50 years of strenuously avoiding it, Lassnig suddenly adopted a kind of rudimentary illusionism. By placing her figures inside a small, dimly lit space, she can brusquely define pictorial details as illuminated by the camera’s harsh flash. What ties these paintings to the rest of Lassnig’s oeuvre is the artist’s penchant for converting small, mundane moments into highly charged, symbolic tableaux. In Couple, Lady in Plastic (both 2005) and Spell (2007), the figures are mysteriously veiled in the transparent plastic, as if undergoing some unexplained ritual.

Unfortunately, the use of the camera ultimately causes these particular paintings to look less surprising than her highly inventive works of the past—more like a type of illustrative representation. While it is fascinating to witness an artist of this caliber introduce a new technology to her work at an advanced age, one suspects that her most psychologically insightful and poignant paintings might never have been realized if Lassnig had discovered the camera sooner. I myself am thankful that she didn’t.

“Maria Lassnig” opened at the Serpentine Gallery, London [Apr. 25-June 8, 2008] and is presently on view at the Contemporary Arts Center, Lois & Richard Rosenthal Center for Contemporary Art, Cincinnati [through Jan. 11]. It is accompanied by a catalogue with essays by Robert Storr, Paul McCarthy and Jennifer Higgie.

Carrie Moyer is a Brooklyn-based painter and writer, and a professor at the Rhode Island School of Design.

From Kylie Minogue’s Rosé to Zac Brown’s Cab: 5 Wines Made by Musicians That You’ll Actually Want to Drink

Jennifer Lopez Is an Assassin Protecting Her Daughter in New Trailer