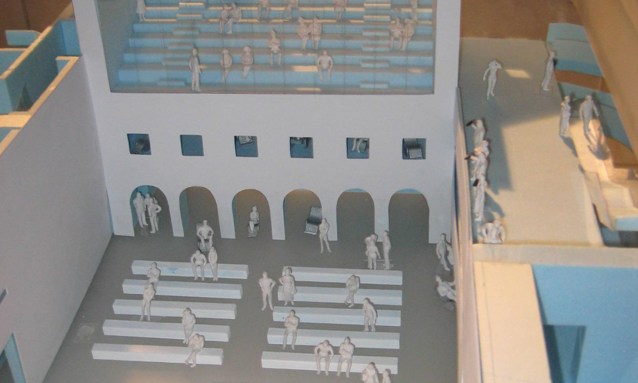 Marina Abramovic has big ambitions to transform the sleepy town of Hudson in upstate New York into an international mecca for performance art and other time-based work. On Aug. 12, the global art star hosted an open house in the future site of the Marina Abramovic Institute (MAI), a 20,000-square-foot downtown Hudson building that she purchased in 2007. The local community, along with some vacationing New York art world denizens, was invited in for a first look at the space. A disused theater built in 1929, the structure subsequently served as an indoor tennis court and most recently as a market for antique architectural fixtures.

There wasn’t much to see in the gutted space last Sunday, except for a new roof that Abramovic said was the only construction completed so far. Also on view were models of the Institute designed by the architectural firm OMA, led by Rem Koolhaas and Shohei Shigematsu.

To kick off the all-day event, Abramovic gave an approximately one-hour talk, with projected images, to a gathering of around 200. She was introduced to the audience by MAI director and Paris gallerist Serge Le Borgne. Why Hudson? Abramovic said that she found it increasingly difficult to focus on her work in New York City, and when Sean Kelly, her U.S. dealer, invited her to visit the area, she found the countryside appealing, conducive to work and suitable for a future MAI; she eventually purchased a home in the country just north of Hudson.

Abramovic expects the Institute to transform the community, attracting artists and art organizations from around the globe. Evoking the Hudson River School of 19th-century landscape painting founded by Thomas Cole, Frederick E. Church and others, she said Hudson would be the center of a new art movement, similarly inspired by nature but focused on nontraditional mediums, durational works and immaterial art.

Plans for the MAI envision a multilevel venue for performances as well as a performance-art archive and study center. Abramovic stressed that the project is intended as an art center and not as a locus for her own works. Visitors will be expected to participate in MAI events, not be passive spectators. Each will be required to sign a contract, agreeing to spend a minimum of six hours in the place. “That’s the only way the Institute can offer a truly transformative experience,” Abramovic told the crowd. “We are so used to rushing through museums and galleries, and it’s impossible to gain anything meaningful from the art. The aim here is to slow time.”

Visitors will be obliged to store their clothing and belongings in a locker, and don simple white smocks, like those used in a laboratory. One can only imagine the experiences that await those who choose to spend time in the artist-devised Crystal Room or the Magnet Room, chambers that are still in the early stages of development. The room devoted to magnetism will reportedly have to do with levitation; crystals, as purported conductors of cosmic energy, offer endless possibilities.

Abramovic declined to give details about her plans to raise the $15 million needed to complete the project. “I have several ideas in mind, but they are top secret,” she said. Expressing confidence that the sum could be reached without too much trouble, she vows to devote the entire coming year to that goal. She projects that the MAI will debut, in at least a limited capacity, in fall 2014.