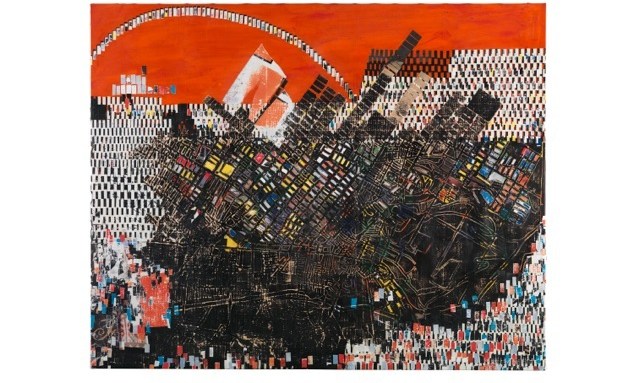 Mark Bradford’s mid-career survey is a comprehensive collection of the last ten years of his monumental paintings and speculative multimedia work. The imposing exhibition spreads throughout the San Francisco Museum of Modern Art [through June 17] and the nearby Yerba Buena Center for the Arts [through May 27].

Bradford’s work involves epic abstract collages are built up with dense layers of billboards, end papers for hair perms from his mother’s hair salon, and newspapers. Bradford cuts, sands and mangles these dense materials in search of something beneath the patina of daily life. They act as evidence, creating complex networks of race, gender, sexuality and class that circulate below the surface of the contemporary social and political spaces they shape.

Bradford sat down with A.i.A at the St. Regis Hotel in San Francisco to speak about social engagement, the art world versus mainstream culture and the responsibilities artists have to one another.

MICHELE CARLSON This is your first mid-career retrospective. What are your reactions to seeing your work exhibited in this way?

MARK BRADFORD I thought this would be a good time to get all the loose ends together and just philosophically see what I’ve been going after all these years. I was happy that I was able to do the two museums at the same time because Yerba Buena has this socially engaged history and SFMOMA has an anlong history of painting. I think my work engages both conversations-art history and social context. The shows crystallize what I think about.

CARLSON The works at SFMOMA span the most time, and you can really see the shifts from an additive, collaged process to a more aggressive digging and gouging reductive method.

BRADFORD I started working with paper right at the beginning and I just started adding different types of paper that I found in the world or that I printed myself. I realized I was building up this very dense map. Like the layers of the different cities of Rome that keep getting built on top of each other throughout history. I needed a shift in the work and I developed a physical reaction to that need. It’s like watching people use a sledgehammer to dig up concrete and then there’s nature underneath. I thought I was retrieving some of my own work beneath the surface.

CARLSON Your imagery often seems active and open-ended, in both how you source your materials and your process.

BRADFORD You hit the right word, active. The only thing I really trust is being active. I’ve always been engaged with the work and the community. In the neighborhood where my studio is, in South Central Los Angeles, there are a lot of immigrant-owned businesses. I’m constantly amazed at the level of work they do. It’s above anything. For me, I think I pattern myself on that work ethic. Being active and engaged is something I grew up with. It doesn’t take you very long to understand in the art world that there’s a privileging towards certain things and a kind of distancing from another. I don’t know why we, in the art world, cannot unpack things and sort of make hybrid notions of a practice. We’re very rigid. It’s funny though; in music, we have no problem sampling, mixing and remixing. But in the art world, why can’t we take little parts of history and mix it together?

CARLSON You use this tactic of remixing in your paintings, where you often appropriate material directly from mainstream popular culture, such as comic books, iPod advertisements or references to pop icons such as James Brown. What is your relationship to these mainstream spaces and images?

BRADFORD If I want to reanimate things, I think that artists should do it. I don’t think they should steer away from things because it’s considered not cool or out of vogue. A lot of the social things that I do pull from in my work are actually more having a conversation with the mainstream. I don’t know why so many artists talk about the mainstream’s problems from the fringe. I think, unfortunately, it’s almost like our education makes us too safe and terrified to step into the world.

Early on, I struggled a lot with how to let myself explore in areas that were safe, and the ones deemed unsafe, based on my education. In the beginning, I was really tight; you can probably see it in the work. I didn’t want to be thought of as not smart. That’s just the truth. Then one day I just put the gas pedal to the floor and didn’t look back. I thought, well if I’m gonna go out, then I’m gonna go out like Thelma and Louise.

CARLSON Can you talk about Detail (on view at Yerba Buena Center for the Arts), which is a new sculpture made from pieces of Mithra, (2008), the large ark you built for the Prospect. 1 biennial in New Orleans? Were Detail and Mithrabig risks?

BRADFORD I’d never built anything like that before. I knew I wanted to participate in Prospect. 1 and that what happened in New Orleans with Hurricane Katrina was still fresh. Again, I was really nervous because when you build an ark in the Lower Ninth Ward, either you’re going to fall on your face, or it’s going to be received well. I built something based on a battleship and Brutalist architecture. And at the end of the day, I do believe in what I do, but when you’re standing in the middle of the Lower Ninth Ward you say, “Do they really need my art project?” That’s when you have to just say, “Well this is what I do.”

CARLSON Rat Catcher of Hamelin (2011) is a large four-panel abstract painting, which surrounds Detail on the walls of YBCA. The imagery in the painting references a problematic LAPD billboard campaign surrounding a serial killer in Los Angeles. It seems like much of your work pulls from the mainstream in order to expose some sort of power dynamic.

BRADFORD The piece was about a serial killer in South Central L.A., Lonnie, who liked to take photos of random women. The police found like a thousand images and made a website where they took many of these women’s photos, gridded them and made almost a lineup of the victims’ faces. They said these women were not suspects and that the police were just looking for them. Yet, by associating them with him, they still painted this broad brush of criminality over these bodies.. This website got six million hits. The civil liberties of these women were disrespected. When I decided to do the piece, I was 100 percent convinced that the website was allowed to go up, with no public outcry, because the black woman’s body is not respected. It is not considered valuable. You can’t call women bitches and hoes in every other song and then say, “but that body is valuable.”

CARLSON Your work directly engages with and responds to social situations in your world and this seems vital to your practice. Not just conceptually, but also in how and what you make.

BRADFORD I like to engage with the world. I’m still curious. The cumulative residue is just something I’m always trying to–not dismantle–but I want to move around the power dynamics and reposition it. What does one do with the currency of success? You know, I’m always thinking about agency, and artists are often asked to do so much, to donate to this or that. We always come last but do so much. We fill up the museum. So, I say this is a currency. But what do I want to do with that currency? How can we help each other?

For me it’s constructing new relationships to commerce, or new relationships to education. It’s like bridge building, but self-autonomous. I just like artist-driven projects but for artists themselves: artist spaces, artist mentor programs and artists buying buildings and making lofts. Doing whatever we can do. Because at the end of the day, I really think that we as a community only have each other.