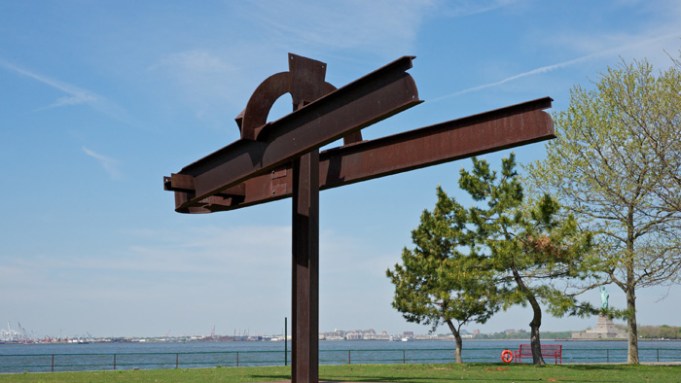 Emerging in the 1970s, when his monumental steel structures appeared in public spaces in all five boroughs of New York, Mark di Suvero’s marvels of balance, space, color and geometric form permeate the daily lives of people worldwide. Yet his exhibition of 11 monumental works, currently on view on Governors Island, is his first major show in New York in 25 years.

Organized by Storm King Arts Center, where di Suvero has mounted three exhibitions, this is Governors Island’s most ambitious show to date. Di Suvero is a shipbuilder and steel worker by training, so it seems especially fitting that his sculptures have found a home on the former military island, where they quietly dominate fields flush with weekend visitors. Here, the works feel like stately remnants from ages past.

Originally creating sculptures made out of wood, di Suvero first began working with steel after a near fatal accident in 1960, which left him paralyzed from the waist down. In order to continue to work, he learned how to operate a crane in order to make his art.

A lifelong activist for peace and social justice, di Suvero, who once stormed the Mall in Washington, D.C., to protest the Vietnam War, was honored in March by President Obama with a National Medal for the Arts, an award also bestowed this year on icons like Meryl Streep, Joyce Carol Oates and James Taylor, among others.

A.i.A. met with Mark di Suvero in his studio in Long Island City, which abuts the Socrates Sculpture Park, the foundation he established in 1986 for young artists to create and exhibit work. The studio, which opens onto the East River, and consists of maze of studios, workshops, artist lofts and galleries, is a world unto itself, and speaks to the artist’s interests in art-into-life, interactivity, and community.

WALSH: Why is the public domain so important to you?

DI SUVERO: When one is an artist, one wants to do art that is meaningful to a lot of people. Most art is shown in museums and galleries, which eliminates a whole population. By putting it out on the streets, you open it up to the world.

In the 1960s, people thought that we were putting our art into the streets for our own self-promotion. They didn’t get that there’s a great thing that happens when you have outdoor works where people are interacting and searching. After World War II, any works that were abstract or non-figurative were seen as being communist, too intellectual. People thought that if you were making that kind of art, you didn’t want to be understood.

WALSH: What early public works made an impact on you?

DI SUVERO: I remember when they first put the Calder in Grand Rapids, Michigan. When that happened, it was stunning. It was the first large piece outdoors in the area, installed in 1967, and it was supported by the government. It was done by people who wanted to have something other than a dull, boring Midwestern town with no center.

WALSH: In New York in the 1960s and ’70s, how did you fabricate such large-scale works?

DI SUVERO: There was no market. No one bought anything. Before I became a sculptor, I was a house painter and an apprentice boat builder. When I came to the city, I was always able to build someone’s loft.

When I started making art, I lived in the fish market, above a fish store. Every day, I swept their floors, and they would give me a fish. That’s all you need: a fish and rice. It really keeps expenses down.

A friend of mine, Neil Williams, had a loft downstairs, that got burned in a fire. He asked me to save what was left after the fireman went through. I had a spare mattress, and a hanging tire. So I put the mattress in the tire, and I realized that it was a great way to sleep. That’s when I started making swinging beds. I still sleep in a swinging bed.

WALSH: You were, early on, crucial at building community among like-minded artists, struggling financially as you were—particularly at Park Place, which ended up being the first gallery in Soho.

DI SUVERO: Park Place was a cooperative that we put together in 1962, with people like Frosty Myers, Robert Grovsenor and Anthony Magar, to name just a few. A lot of people would stop in, and then immediately move uptown, which was the best place to be represented, by the galleries up there. We gave Sol LeWitt one of his first exhibitions, before he moved uptown.

We hired a director, and she gave our works to the collectors, and they paid our rent. The director was originally John Gibson, and then it was Paula Cooper.

WALSH: Your first exhibition was with Dick Bellamy at the Greene Gallery, and you and he had a long-standing friendship. How did that relationship grow?

DI SUVERO: He also gave first shows to people like Donald Judd, Richard Serra, and Mike Heizer. The list is huge and very long. But he wasn’t very financially very motivated. At the end of his life, he ended up living here, in my studio in Long Island City. We would see him all of the time, in his boxers, with an old sandwich in his hand. He would sleep on the floor. He had an unusual charm.

WALSH: In 1960, you were paralyzed. This changed your very physical practice, and you also shifted from working in wood to metal.

DI SUVERO: I was able to work anyway, but I suffered from depression. Paralysis is awful. It’s like part-death. But there is a will in human beings to persevere. No matter how much you put into your art, it gives you back more. Because after a piece is finished, you have the reward of seeing it, and you have the reward of having other people respond to it. It’s a weird justification.

WALSH: You’ve recovered the use of your legs, and still very much use your own hands in your work-bending the steel, operating the crane. The show at Governors Island must seem like something of a return to the place where you were in the 1970s, when you created so many public works in New York .

DI SUVERO: I still suffer through dark periods, though. I don’t call them depressions now. I think about how much my work has failed, in the sense that it hasn’t achieved that kind of rapture I was hoping for. And then you get depressed how much you repeat yourself, how much you have not explored. Exploration for exploration sake is not enough. You need to make exploration work for the art, for the next step. Then it’s worth doing.

I want my work to be poetry. It’s a way of emotionally understanding and handling the world through language. But people are weary of poetry. They don’t trust it.

WALSH: In a world in which information moves through so many new channels, how do you define public art? How do you define it against an iconic work of art, like, say, Jeff Koons’ Puppy?

DI SUVERO: I think that as a contemporary artist, I am doing something quite different from Jeff Koons. He is disseminating his work to the media, which leads them to the market. Koons works in the tradition of advertising billboards. It doesn’t have that real juice of life, the kind of life that opens up to show you what you can possibly do, in the most feeling way. It’s “anesthetic” art, meaning “not aesthetic.” It’s made numb.

WALSH: You say that your work isn’t anthropomorphic, or that you try for it not to be. The titles of the pieces are vague, and not easy to decipher as narratives? Could you explain what you are trying to achieve besides poetry, both materially and formally?

DI SUVERO: I like to do interactive work. I really believe that the piece needs to be all the way around you. We see in about 210 degrees, but you feel what there is at the very edge of vision. A painting, unless it’s a panorama, is an object in the distance. And you look through a frame. With sculpture, you can get inside of it. It gives you a different kind of a feeling.

The journalists at Governor’s Island, during the preview, asked me: “What are you doing with your work?” And I told them: “I’m creating orgasmic space. You don’t know it until you feel it. So you have to walk inside the piece.” And the next thing I knew, all of them were climbing inside of the work.

WALSH: When I went to visit the show, there were signs all over the park saying “DO NOT CLIMB.” But there are kids playing all over She (1977–78), and it really seemed like that was your intention, for kids to be able to inhabit the space.

DI SUVERO: [Laughs] It was my intention! I used to build toys for kids in the ghetto, back in the 1960s when I lived in the fish markets. I thought I was doing something for them, but instead they were teaching me.

WALSH: What were they teaching you?

DI SUVERO: Questions of balance, what works in a toy. Very complicated toys break down, and once they’re broken, they’re broken. They taught me not to work with chains. Because chains, when they wrap around an arm, are excruciating. With a rope, it’s OK.

This Bonkers Electric Fan Car Captivated Goodwood. Now the Brand Is Making One for the Street.

Kendrick Lamar’s Crown of Thorns by Tiffany & Co. Has Over 8,000 Diamonds