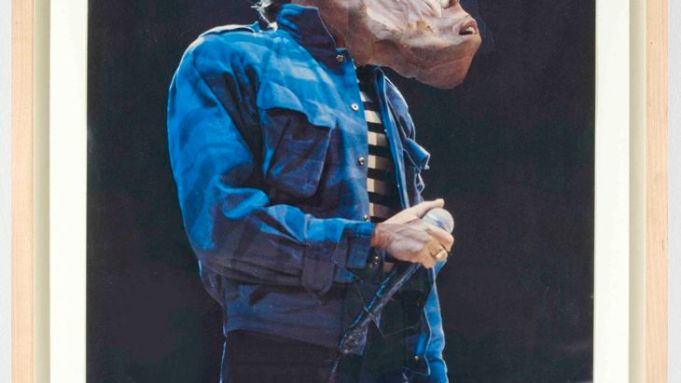 Texas artist Mark Flood may be best known for his lace paintings from the early 2000s, the large, multi-hued acrylic pieces that use torn fabric to illusionistic ends. But his expansive retrospective, “The Hateful Years,” at Luxembourg and Dayan through Sept. 19, presents those delicately rendered lace works as a fairly profound deviation.

The show includes some 120 pieces of collage, sculpture, music and ephemera, displayed in reverse chronological order (the newest works are the first one encounters, on the first floor). “I didn’t want to be ‘the lace painter’,” said Flood, 56, who spoke to A.i.A. on the day of the exhibition’s opening. “It was an emotional struggle for me to accept that. Lace has a lot of connotations that I was never interested and that I’m still not interested in.”

The top floor of the exhibition is uber-Flood, establishing his connection to the world of music—which preceded his art world ascendance—and functioning as a portrait of the artist as a young punk. Performing as an ersatz replica of a bedroom, the artist says the installation is an amalgam of his memories of youth.

“It’s not supposed to be any particular place,” said Flood. “I wanted to create a little installation that showed the lifestyle, and showed these paintings in a crazy crash pad, circa ’79, ’80 and ’81.” The room is strewn with humorously subversive pieces, including I Obey, a 1979 acrylic on canvas painting that reads, “I OBEY CBS NBC ABC PBS.”

In this room a record player plays selections from Flood’s ‘80s punk band Culturcide, which disbanded in 1993 (the band has since reformed with different members). The 1986 album Tacky Souvenirs of Pre-Revolutionary America, wherein the bands plays directly over popular songs by Bruce Springsteen and David Bowie, spins on repeat. “I always kept my music and my art separate when I was doing them, but I decided a few years to combine them,” says Flood. “My music career has influenced a lot of people in choosing to work with me, so I thought: that is a sign.”

For Flood, the music was never made for the long haul. “I really never expected people to remember the music. I just thought, I can be an artist when I’m older, but the music I have to do now, while I’m young.”

The music corresponds seamlessly with Flood’s sculptures, which appropriate and often nullify store-bought commodities. For Muted Coke Bottle (1983), a deceptively simple work, Flood uses red acrylic to erase the bottle’s label, leaving only the physical iconography.  “I wanted to take a mass media object and correct or refute its message,” said Flood.

The exhibition skips over most of the ‘90s and ‘00s and goes directly to the lace paintings, the genesis of which Flood ascribes, in part, to critic Dave Hickey’s 1993 book The Invisible Dragon: Four Essays on Beauty, which postulated a return to beauty in an era of “anti-aesthetic” art-making. “Hickey made me realize that I made ugly art,” says Flood. “But that’s what I thought art was about—if you made something beautiful, you were suspect. A sell-out whore. I asked myself: who does this serve? I was inspired by Hickey to explore the idea of beauty as a way to say fuck you to art bureaucracy. When I discovered how to make something beautiful, I no longer needed any art bureaucracy.”

Flood came to lace at a crossroads. “I started to realize I needed a new technique to go further,” says Flood. “So I saw piece of lace, and I thought that it was kind of like silkscreen, which I had done a lot of. I just tried rolling paint through the lace at first, and I realized it was kind of interesting-lace does weird things with paint.”

Flood’s recent work includes abstractions that dominate the gallery’s first floor, like the acrylic-on-canvas Rio (2012). The rich, layered painting depicts a column of deep blue bordered by lace panels in multi-color, bronze-tone metallics. Errant bits of string connect the lace panel borders and bisect the blue column, creating an effect of branches over a river. It is a thing of beauty.