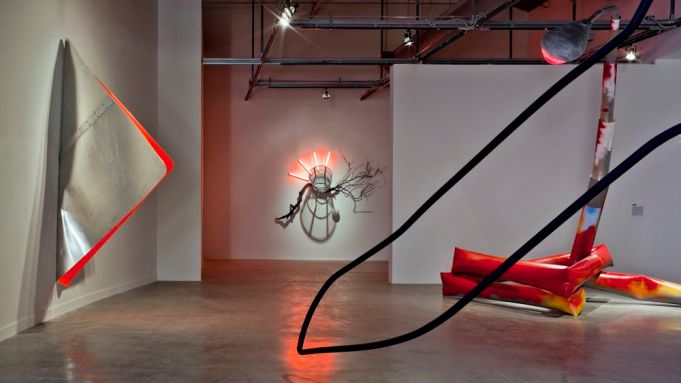 “I believe deeply in art,” Handforth told A.i.A. “I believe it has a higher purpose. [So] I’m trying to speak in an available language.” Like an apostle for art, he proselytizes through interventions in public space. He is best known for his large, playful sculptures that anthropomorphize or otherwise distort everyday objects-but the new works sally forth into a fresh landscape of fluorescence and neon. It’s appropriate for Handforth’s first show in recent memory in his native Miami, where a building without neon is hardly a building at all.

Several works draw on the imagery of William Blake, like the megawatt Eclipse (2003), a focal point of “Rolling Stop.” More than 100 white lights make up this sculpture, which provides most of the illumination for the show. The shape and scale of the “rays” (fluorescent tubes), which emanate outward from a circle defined by empty wall, evoke the over the top, hagiographic light in Blake’s watercolors.

The piece gives off so much light, in fact, that the nearby Blue Hanger (2011), an outsized replica of one such object, is silhouetted into a mere line drawing in space. Its three dimensions appear beautifully lit when seen from behind. Handforth is expert at these manipulations, as well as at making one hyperaware of the negative, architectural space carved out by this and other gigantic “readymades.” In fact Eclipse stretches to the otherwise unlit cathedral ceiling of the museum, its light defining a new, quasi-worshipful space.

The rhetoric of the everyday runs deep: other sculptures include modified garbage cans and phone booths. Slow (2005), an oversized traffic sign, is folded horizontally and rotated 90 degrees; another sculpture, Lamppost (2003), a close approximation of a street lamp is coiled at its base like a serpent. Nearby is one of Handforth’s signature pieces: Vespa, completely covered in candles (2001): lit, dripping and completely melted. It’s both repugnant and beautiful, an industrial altarpiece with soft edges. “Brecht spoke about using Plumpes Denken,” Handforth said in an interview with Tom Eccles. “Fat thoughts that speak to people. Like a lamppost is a fat thought. Or a coat hanger. These are plump thoughts that everyone can grab hold of.” Handforth uses banality to seduce a general audience (Brecht’s “the people”) into looking at art objects.

Handforth has also installed the giant Electric Tree (2011) in a public park blocks from the museum. This outdoor sculpture elegantly reverses the daytime shade from a Banyan tree into a nighttime pool of light from countless fluorescent tubes. By taking the work out of the museum, Handforth forces an encounter with sculpture in a neighborhood that he jokingly calls “the un-Basel.”