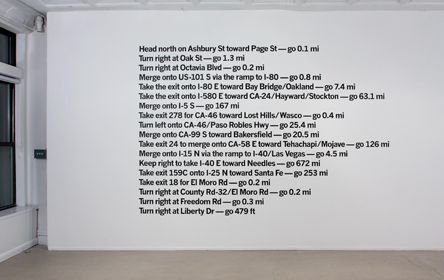 With “Presentation,” New York-based Austrian artist Martin Beck’s first show at 47 Canal [through Nov. 18], the artist re-imagines the mid-century commune. “All these archival commune images are of barely clothed younger people in nature—I mean, what’s not to like?” laughed Beck. “But for this project, I wanted to leave the images out of it, and construct an image that doesn’t use that archival material.” The artist uses the Drop City commune, which formed in Colorado in 1965 and dissolved in the early ‘70s, to consider the structural arrangements of planned communities.

The largest work in this tightly composed show, Directions (2010), consists of vinyl wall text listing the driving directions from the intersection of Haight Ashbury, in San Francisco, to the now-defunct headquarters of Drop City in Colorado. “The directions are what you would get if you compounded the results from a number of different sites—Google, Mapquest, and so on,” Beck told A.i.A.. “These directions are waypoints, the places where you have to change direction. I’m giving readers a scaffold to create their own stories. It’s a much more structural way to think about the journey.”

Drop City is perhaps best known for images of its geodesic tent structures constructed with brightly-colored panels, which were both artworks (“droppings,” in the parlance of the commune) and residences. Today these structures are now removed, and the grounds have been partially taken over by a truck repair shop. Beck reinterprets the structures with a wall piece, rumors and murmurs (polygon), 2012, comprising white fabric stitched together in geometric patterns that mimic the tents. “It’s a polygon structure based on a geometry with no rules—the most anarchic form of geometry,” explained Beck. “Dome building is a very rigid form. The structures [at Drop City] were essentially buildings that do not have the patience for geometry.” The work is almost invisible on the wall.

Inside the gallery’s office, drawings, screen prints and woodcuts invoke the artist’s extensive research for this project. “When you assemble a collection of materials, it becomes an archive,” said Beck. “But I didn’t want to treat it as an archive—no vitrines.” Instead, the artist chose pictures from various books on commune living-including books on cooking, astrology and agriculture—and reconfigured and reinterpreted their imagery. “I started to literally tear out pages. As I clipped them together, they became almost like other books.” The untitled resulting work (2012) comprises eight book pages stacked together and pinned to a wall, with each page depicting an iconic element of commune living, including a diagram of love relationships, a page stamped “Altamont Library,” and an image of chickens.

Another piece of the artist’s puzzle is found in a large image of the moon, We dismantle abandoned bridges… (2012). The artist shot the beatific image in California, and its bright, intensely detailed focus on the moon’s surface is a suitable counterpoint to the idealism woven throughout the show. “I kept coming across this notion of fantasy,” said Beck. “The moon functions as a projection surface, and holds this utopic idea of colonizing a blank slate. And the communes [were constructed at the same time] the Apollo missions.” Using our planet’s satellite as a metaphor for transcendental union, Beck illuminates the eternal human imperative toward connection, in this world or beyond.