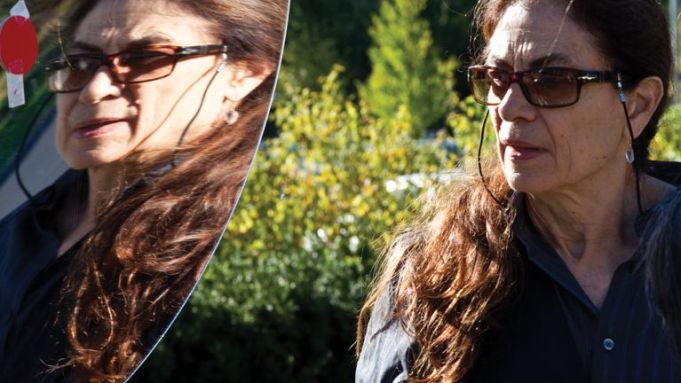 Yesterday, pioneering public artist Mary Miss unveiled FLOW: Can You See the River? in Indianapolis, the first in the artist’s City as Living Laboratory (CaLL) series of projects that combine art and environmentalism to raise public awareness about issues of sustainability. Commissioned by the Indianapolis Museum of Art (IMA) for its new Fairbanks Art and Nature Park, dedicated to site-specific artworks and environmental research, FLOW  “makes visible the importance of the White River to the city of Indianapolis and those living there,” Miss told A.i.A.

The river travels through central and southern Indiana and borders the 100-acre park, which was inaugurated in summer 2010 with eight artist commissions. According to Miss, “Although the White River provides the city with 70 percent of its drinking water, unlike cities such as Chicago or Milwaukee, Indianapolis did not evolve around the river.” Thus FLOW, through installations, interactive technologies, a festival and other public programming realized through the collaborative effort of some 20 arts and municipal organizations, examines how the river affects the lives of ordinary citizens, and vice versa.

Sited along a 6-mile stretch that extends from the IMA property to the downtown White River State Park, approximately 100 markers situate viewers in the landscape, which includes untamed woodlands, wetlands and a 35-acre lake, and provide information about the significance of each site to the overall ecology of the river. About half these markers take the form of oversized map pins, constructed of steel and painted red, with numbers that allow for dial-up access to brief audio pieces. The other half are circular, stainless steel mirrors atop eye-level posts onto which are etched informational texts and a red dot. “Visceral engagement is most important to me,” says Miss. “In an effort to align the red dot on the mirror with the red dot in the landscape, the viewer’s eyes move back and forth, causing an optical play.”

Related components include six, 3-foot diameter red dots (some steel, some vinyl), on the facade of the IMA, symbolizing the six water systems necessary to the sustain the building, and 18-inch red fabric bands wrapped around trees around the museum and the lake that mark 100-year flood levels. Various kinds of mapping, such as Track a Raindrop, an easily accessible Web app that uses GPS software, allow the project to “infiltrate the city.” Anyone can enter the location of their home and track how water flows from their house to the river (for example, via an underground pipe or an open stream) or monitor the impact of a heavy storm on river levels.

FLOW serves as a template for other CaLL projects, created by Miss in collaboration with Marda Kim of EcoArts Connections, who sees these works as “modest interventions that act as catalysts for future initiatives.” One finds precedents for these works in earlier pieces by Miss, such as Park as Living Laboratory (2005–06), in Irvine, Calif., and Connect the Dots (2007), included in the exhibition “Weather Report: Art and Climate Change” at the Boulder Museum of Contemporary Art.

Miss is currently working on two other CaLL projects. Broadway: 1000 Steps similarly uses markers with mirrors to re-envision the New York thoroughfare as a green corridor, while educating people on the street about sustainability. Her project for the upcoming group exhibition “Civic Action: A Vision for Long Island City,” a collaboration between the Noguchi Museum and Socrates Sculpture Park, on view Oct. 13, 2011–Apr. 22, 2012, looks at repurposing existing elements of the site as a laboratory for CaLL and other art initiatives.

FLOW opened Sept. 22 alongside the FLOW: White River Festival, a series of citywide programs and public events that runs through Oct. 1. For more information, see http://flowcanyouseetheriver.org.