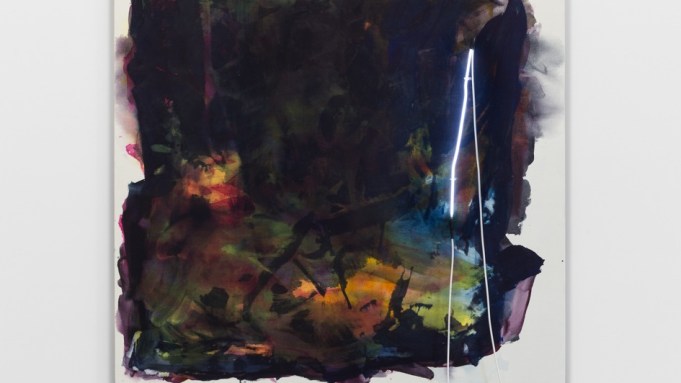 Mary Weatherford was sitting in the middle of Los Angeles’s David Kordansky Gallery the day before the opening of her show “Los Angeles” (extended through June 28), her first with the gallery, inspecting her new paintings. Hanging on the walls were large color-driven abstract paintings, each with a neon light or three, the cords dangling bare, leading into transformers on the floor. Weatherford was racking her brain for memories or moods that connect the “Los Angeles” part of her mind with the part that paints the abstractions in hopes of finding that “voilà” moment that would spur her recall, because something was missing.

“There’s one last painting that needs a title,” said the L.A.-based artist, 51, her flecked eyes intensely scanning the canvas. The painting in question—a bleary murk that might be mistaken for lingering nightfall (or more accurately the “magic hour” that cinematographers call the fading light of sundown), punctuated with a bolt of neon light affixed to the canvas—will ultimately be called 1969, a year that is pregnant with history both societal and personal.

“I knew that I had to make a Los Angeles show,” said Weatherford, who moved with her family to Los Angeles from nearby Ojai at the height of the Civil Rights movement, in the late ’60s. The personal elements are purposefully obscured—the paintings, after they are finished, take on a meaning to Weatherford, and the titles are buried clues to the diaristic impulse. The canvases in the current show feature titles like over Rose Hills (Rose Hills is a cemetery in Whittier, Calif.), Oxnard Ventura, the light in Lancaster (famous for its blooming poppy fields), and apparition in Artesia, each laying out some raw sentiment, whether experiential or mood-driven: family histories and personal memorials abound in the work, but remain obfuscated.

Weatherford has worked with the concept of place for many years, but the neons added another level to her work. Despite being active since the ’80s, her true breakout show wasn’t until 2012, “The Bakersfield Project,” at the Todd Madigan Gallery at California State University at Bakersfield, where she was invited to conceive of a show for which she could collaborate with students. The Bakersfield paintings, in much the same way the L.A. paintings are about Weatherford’s history of Los Angeles, were made in similarly abstract ways about the weird central California town known for oil fields and pistachios. Not being the type of painter that cedes the actual paintbrush, Weatherford originally came up with the idea of adhering neons to the work simply as a way to include the students. The show eventually traveled to LA><Art in Los Angeles.

Her later 2012 show “Manhattan,” at Brennan & Griffin, featured similar location-painting-plus-neons that Weatherford saw as conveying narratives of everyday life related to her time in New York in the ’80s (Varick St. was stepping onto the street in the morning, Wonder Wheel was a trip down to Coney Island, and Empire represented glancing up at the Empire State Building on the way home in the evening).

That show was a look back. After graduating from Princeton, she toiled in New York until 1999, when she moved back to Southern California. She received critical acceptance in the years following, but seemed to be caught in a state of perpetual emergence—reviews in ArtForum and the New York Times in the mid-2000s, inclusion in Christopher Knight’s 2007 “45 Painters Under 45” article in the L.A. Times, selection to the 2008 California Biennial, a Rachel Kushner article calling her a “new blue chip” artist in 2009. Last year, an anonymous poll of curators, gallerists, and advisors identified her as one of “L.A.’s Hottest Artists.” [For the record, the author of this article organized the poll.]

In “Los Angeles,” her history with the city erupts onto the canvas. Each painting carries a memory or a feeling from her past, albeit with abstract execution—more like representations of an idea of a place. The paintings become gauzy mindscapes (not landscapes, mind you, but something much more vulnerable and cerebral), rendered with Flashe vinyl-based acrylic paint that stains and swirls on the canvas in color fields, before being lyrically interrupted by thin vines of colored neon light. The neon causes a push-and-pull with the viewer’s attention, at times drawing the eye towards it, and at other times disappearing into a negative space that frames the paintings underneath, highlighting the canvas. Shadows play behind the neons, adding new levels of texture, while the cords from the lights themselves act as sculptural, draped lines.

When prodded for specificity, Weatherford provides scant details into her Angeleno past. “My childhood was swimming lessons in Inglewood, and then going over to Exposition Park and then up to [the Los Angeles County Museum of Art],” where she would see the seminal 1971 “Art and Technology” exhibition at the receptive age of nine—the show paired artists like Robert Rauschenberg, Andy Warhol, Richard Serra, Rockne Krebs, Robert Irwin and James Turrell with tech-oriented corporations like Kaiser Industries, GE and IBM. Later, after Weatherford moved to the East Coast to study at Princeton, she would find a catalog of the show in the library there, leading her to identify the works she had had stored in her mind.

“My introduction to the broader possibilities of art happened on a field trip to see that show,” she said about her early education to contemporary practice. The LACMA show’s convergence of historical art practices and technological innovation are hinted at in Weatherford’s simultaneous use of abstract paint and neon as a paint stroke. For their part, the painted areas flirt historically with 1960s Color Field works—particularly Ronnie Landfield and Helen Frankenthaler—and some of the neons “zip” down the middle like a plugged-in Barnett Newman.

“The thing that unites these as ‘Los Angeles’ paintings is the light—not the neons, but in the painting,” Weatherford said, pointing out the grays, browns, ochres and greens that play off each other formally. “Los Angeles used to have ‘smog days,’ when you didn’t have to go to school. I was aware of living in a smog basin from the time I was little. So, what I tried to do in this show was to make the colors dirty.”

To Weatherford, the neons could be the city lights of the Los Angeles she’s conjuring, but more than that, they solved a problem she’d been struggling with for years.

“When I had the idea about the lights two years ago, I realized that it was a way to make a painting about the city and about the 20th century,” Weatherford said. “It’s electricity. It’s Modernism.”