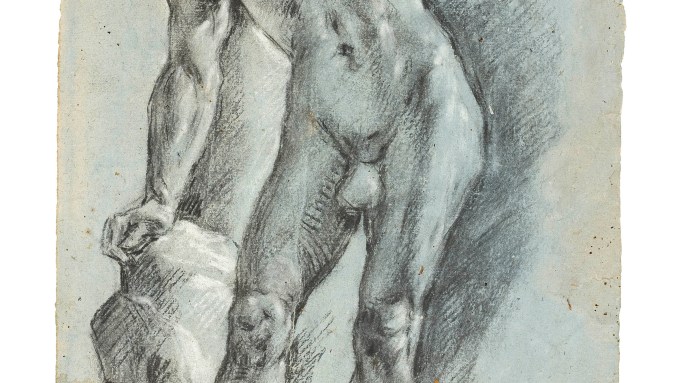 Now in its fifth year, Master Drawings New York [through Jan. 28] has evolved from a showcase primarily for drawings made between the Renaissance and the First World War into an event that includes material stretching to the 20th century and contemporary art. The format remains the same: private dealers from the United States and Europe colonize galleries on the Upper East Side while resident galleries bring out their best drawings for weeklong exhibitions that coincide with the Old Master Auctions at Sotheby’s and Christie’s.

The shift to include recent drawings corresponds to the increasing scarcity of drawings in long-established collecting categories like Italian masters of the 16th and 17th centuries or Dutch artists of the Golden Age. The presentation of drawings made over the past 100 years in the context of Old Master drawings provides an exciting opportunity to reconsider relatively new works through lenses typically restricted to older art-function (how a drawing is used by an artist: preparatory, academic exercise or independent work on paper), history and, yes, even connoisseurship.

Twenty-three dealers are participating in this year’s installment of Master Drawings New York. Geographically, they range from 64th Street to 81st, between Fifth and Madison with only one dealer ranging as far east as Lexington Avenue. It is a day’s work visiting them all, but it’s well worth the effort to see  beautiful art displayed in some very interesting gallery spaces that are usually open only by appointment.

Despite the difficulty of procuring Old Master drawings, many dealers valiantly continue to bring fresh work to light. Mia N. Weiner has a drawing attributed to the Florentine Mannerist Pontormo. The double-sided sheet depicts allegories of fertility represented by extremely elongated and anatomically exaggerated figures rendered in brown pen outline, delicately shaded with black chalk. The drawing makes for an art historical detective story just beginning to be unwound. If Pontormo’s patrons were Cosimo de Medici and Eleonora de Toledo, how do the subjects relate to them and what was the setting for the final work that this drawing reflects?

Another 16th-century drawing, An Allegory of Faith, is clearly documented as the work of Netherlandish artist Crispijn van de Passe and dates from about 1690. It is displayed in a line of precious small works in the connecting hallway of the gallery that Crispian Riley-Smith shares with Margot Gordon Fine Arts. Just over three inches in diameter, the roundel is the model for a print de Passe designed and engraved for a book of emblems. Rendered in pen and brown ink with blue wash, the color is surprising in a work intended for a monochrome engraving. Even more unusual is the fact that the blue is used to articulate the foreground, while the distance is rendered predominantly in browns, reversing the usual sequence of warm foreground and cool background found in Netherlandish landscape.

Didier Aaron mounted an exhibition devoted to a single technique and period, filling two rooms with glorious sanguine crayon (a natural red chalk rich in iron oxide) drawings from 18th-century France. It is an exhibition that would be at home in a museum with works by Watteau, Boucher, Hubert Robert and Greuze. To my eye, the most fetching sheet is Pierre Chasselat’s ca. 1785 Study of a Young Woman Reading. Her silk skirt is created with masterly strokes of the crayon, the barely perceptible white highlights coaxing the form to full volume.

A series of Spanish drawings brought by Madrid-based dealer Jose de la Mano will be the most surprising to American viewers. Rarely do we have the opportunity to see Spanish draftsmanship other than Goya. A supremely powerful academic nude is the 1702 male figure study by Juan Conchillos Folco. On a beautifully textured sheet of blue laid paper he builds the athletic body with bold painterly strokes of black and white chalk. Dark tones pressure the lighted side of the figure while white strokes on the dark side create a strong sculptural volume. As with many drawings in this exhibition, Folco’s sheet bristles with immediacy that bridges the three hundred years since it was made.

Freshness also marks many of the drawings shown by Richard A. Berman. Two 18th-century Italian drawings, one in pen and ink by Francesco Fontebasso, another in pen ink and wash by Domenico Tiepolo, have a clarity of line and richness of value that show how much is often lost through cleaning and conservation many old drawings undergo. Another treasure in Berman’s exhibition is Paul Delaroche’s Head of Charlemange, ca. 1838. The artist carefully built up his black chalk to create vivid characterization of his mature bearded model. In the upper right corner is a very quick sketch of a figure, perhaps an angel. Charlemagne seems to stare directly at this apparition.

The 19th century is well represented, perhaps reflecting greater amounts of available material from this period. Amid splendid drawings by Pissaro and Bonnard, Jill Newhouse Gallery has a display of seven works by Eugène Delacroix covering several decades of his career and a wide range of strategies. The earliest is a page of pen and ink studies after prints by Michelangelo and Raphael. We can see Delacroix experimenting with different hatching styles as he copies various engravings. A freer study of the flowers of the trumpet vine called “American Jasmine” shows the mature touch with chalk that is also evident in his lithographs. Also included in the group are studies in watercolor and pastel for various architectural and mural schemes and a beautiful landscape watercolor.

Watercolor also figures in the exhibition of the British dealer James MacKinnon. George Pyne’s Two Views of an Oxford Undergraduate’s Room offers a glimpse of another world. By showing the same room from two points of view Pyne puts us in the space, where we examine the student’s charming Early Victorian décor and assess his habits. The gun leaning against his bookcase suggests that he values hunting as much as his studies. On the positive side, the pictures on his wall show that he is a print collector, albeit mostly sporting prints and some clearly recognizable Landseer engravings.

At Barbara Mathes Gallery an exhibition of drawings from the past 50 years shows the potential of connoisseurship as applied to recent drawings. The display has been set up to facilitate comparison of facture and technique in works by artists working in the same periods which can then be considered in relationship to subtle differences in content. Exceptionally interesting was a drawing by Fred Sandback seen in relation to a group of drawings by Sol Lewitt. On first glance, the two artists’ styles seem more alike than different, employing ruled lines, pen and ink and some form of isometric projection. On closer examination the Sandback differentiates itself by his tender touch with what is perhaps a felt-tipped pen that depicts a real space articulated by a single piece of yellow yarn, represented by a yellow line. Lewitt used a blacker ink with what seems to be a ruling pen to create forms that have no correlating scale in the real world, the regular but not too perfect hatching lines bending the forms in unexpected ways.

Mathes brings her selection to the present with a 2004 work by Phillip Taaffe.  In place of common dry or wet drawing media Taaffe created Melting Head in what appears to be the traditional technique of marbleized paper. Another mix of contemporary and modern is seen at the gallery of New York dealer Sigrid Freundorfer, who has a selection of recent watercolors by Paul Jenkins. At the heart of her display is a group of reed pen drawings by Hans Hofmann from the 1930s and 40s. Two Provincetown landscapes demonstrate Hofmann’s potent combination of structure and spacial depth while a double-sided drawing of a wicker chair and a self-portrait show a more personal side of this influential master.

An exemplary combination of old and new is found at Moeller Fine Art. One of Moeller’s key artists, Lyonel Feininger, is represented by a group of works that range from his exquisite pen and ink rendering of a scene from Bleak House dating from 1891, when the artist was only 20 years old; to expressionist drawings with a comic twist from his Berlin period in the teens; and ending with some of his analytical linear studies of ships from the 1930s. These works are surrounded by suitable companions—the expected, like those by his Bauhaus colleague Kandinsky, and surprises, like the group of drawings by Richard Lindner. The exhibition is rounded out by a 20-year survey of drawings and collages by French artist Eric Fonteneau. Just as with Feininger, we can follow Fonteneau’s development culminating in his newest works that combine very lightly applied pigments with piercing to create the topographical configurations in his 2011 drawing Carte Blanche: Les Deux Lacs.

The appeal of drawings has always been the immediacy of the relationship between the artist’s vision, imagination and hand. The material and methodological understanding of drawing that has been developed over generations is entirely relevant to drawings done today. Master Drawings New York has the potential to evolve into a forum where historical and contemporary art coexist and contribute to a deeper understanding of the entire field.

Celine’s Next Men’s Show Will Be at Le Palace