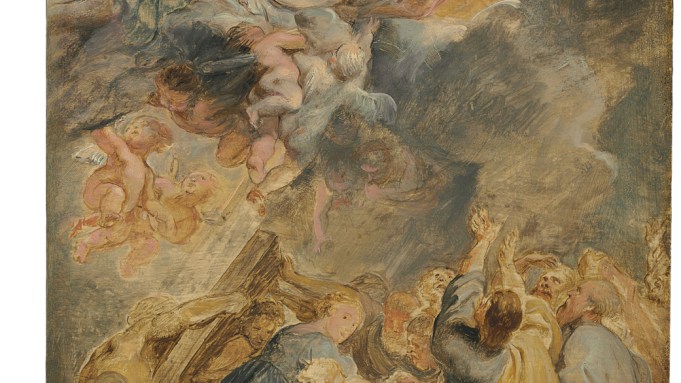 The first of a four-part sale of old masters at Christie’s in New York yesterday brought tepid results, fetching $34.3 million, well below a pre-sale estimate of $38–56 million. Despite property from the estate of Elizabeth Taylor, and marquee names including Rubens, van Dyck, Pieter Brueghel the Younger, Hans Memling, Frans Hals and Giambattista Tiepolo, several pricey offerings fell short of expectations.

Twenty-five of the 59 lots offered sold below their low estimates or failed to sell.  Among the works that flopped was the catalogue’s cover lot: Memling’s The Virgin Mary Nursing the Christ Child, a fiery-gold roundel probably executed by the artist during his mature period, ca. 1485–94. The 6-inch oil-and-gold on panel had carried a pre-auction estimate of $6–8 million.

One bright spot was a portrait from the collection of Elizabeth Taylor by Dutch master Hals, Portrait of a Gentleman, Half-Length, In a Black Coat, probably executed in the early 1630s, which sold to a telephone bidder for $2.1 million. The painting had hung alongside Andy Warhol’s portrait of Taylor in the actress’s Beverly Hills residence. The hammer price more than doubled the presale high estimate of $1 million.

But without Hollywood associations, other works struggled. Giuseppe Arcimboldo’s A Reversible Anthropomorphic Portrait of a Man Composed of Fruit, an oil on panel that the artist probably painted for Holy Roman Emperor Rudolf II, also failed to sell. The work, exhibiting the artist’s hallmark eccentric use of fruits and vegetables to build a portrait, sold at Sotheby’s just 12 years ago for $1.4 million, and carried a pre-auction estimate of $3–5 million.

Tiepolo’s The Arrival of Henry III at the Villa Contarini, an oil on canvas that was likely executed ca. 1745, figured as the sale’s top lot. The light-drenched Venetian scene garnered interest from numerous bidders, selling to an unnamed collector on the telephone for $5.9 million, just below its $6 million high estimate.

An afternoon sale of “The Art of France” did little to restore confidence, bringing in $10 million, less than half the $22.1 million dollar presale high estimate. Nineteen of 44 lots offered did not find buyers, and a small oil on panel by Noël Hallé, A Lady Entertaining a Child of a Savoyard Woman with a Pinwheel, sold for the bargain-basement price of $3,750, against the $30,000 low estimate.

Christie’s and Sotheby’s old-master auctions in New York had projected to reap as much as $194 million. Sotheby’s sale takes place today.

[Final sales prices include Christie’s buyer fees. Estimates do not.]