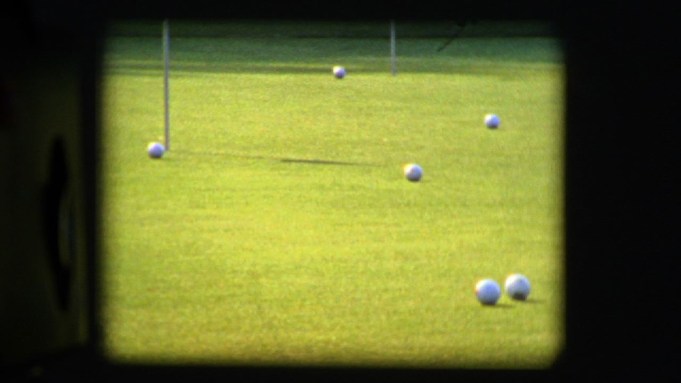 In his third show at D’Amelio Terras in New York, Matt Keegan explores the iconography of New York. Take, for instance, the show’s title, a collaboration with designer David Reinfurt, which replaces the “♥” in “I♥NY” with an apple—and not just any apple, but the logo for De Appel, the contemporary art center in Amsterdam. “I’m very interested in the space between language and photography or language and image, so I love the pause that this may generate for the viewer,” Keegan told A.i.A. prior to the opening. The result is a statement that reads pictographically, “I Apple New York,” and a set of hermetic references.

Fifteen panels of sheet metal are mounted on three of the gallery’s walls, creating an architectural wrap and mat. The colors on the monochrome sheets match those of the bridges that connect the boroughs of New York. On this standardized armature, Keegan scattered 60 photographs he took while walking the city—a meandering set of manhole covers, storefronts, streets, people and objects that are of personal interest and often surprising humor. A portrait of the New York subway ad celebrity, Dr. Zizmor, shows him posing for Keegan’s camera. Nearby hang an image of an American Windsor chair in a white apartment, the ad on the back of a U-Haul truck and a nondescript brick wall. All are familiar but disorienting sights. Because of their relative anonymity, most could have been taken on any number of streets in New York’s grid.

Not least because Keegan photographs manholes, this show invokes Lawrence Weiner’s exploration of New York’s urban terrain, In direct line with another and the next (2000). While the title suggests a grid structure, Weiner prints the text on 19 manhole covers scattered below Union Square, creating temporary public monuments of deliberately under-the-radar forms. The two projects are also linked by both artists’ interest in revolutionary city planner Robert Moses, whose interventions into the city’s public spaces radically re-determined them.

Keegan’s 9-minute video, Biography Biographer, features the artist’s father, who as a teenager worked as a caddy at Moses’s golf club and worked closely with several of Moses’s associates.  Riffing on the documentary form made popular by PBS, Keegan’s video presents a portrait of his father and New York as told through the layered understanding of Robert Moses as a highly contested city planner and architect of New York as we know it.

Keegan’s 2008 artist book, AMERICAMERICA, accumulates multiple, inter-generational voices in the art world, all seeking an answer to the question “How did we get here?” This show directs that same question to New York, while focusing on social history, architecture, photography and sculpture. Circulation, a crinkled aluminum wall relief, hangs above the gallery’s entrance portal, and can only be read when approached from an angle.