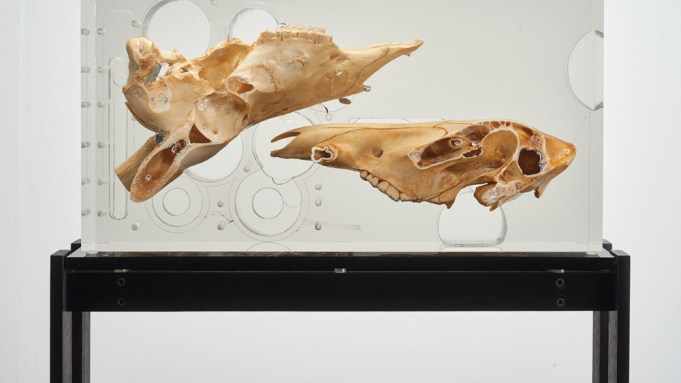 When European colonizers arrived on The shores of central Africa, some Indigenous people believed they were spirits returning from the dead. In King Leopold’s Ghost (1998), historian Adam Hochschild describes one such encounter. The people living near the mouth of the Congo river “apparently saw the white sailors not as men but as vumbi—ancestral ghosts—since the Kongo people believed that a person’s skin changed to the color of chalk when he passed into the land of the dead.”1

Matthew Angelo Harrison’s sculptures are haunted by the legacy of colonialism and transatlantic slavery even as they explore modern technology and contemporary African American culture. Small wooden figurines, mostly purchased online, are bisected at the waist or neck, or split horizontally and splayed open, before being encased in ash- or violet-colored resin blocks. Other artifacts and animal skeletons are left whole but protrude slightly from their resin tombs, as if still slowly being subsumed. These resin forms are perfectly geometric, machined, futuristic: the technology of today literally engulfs remnants of another place and time.

Harrison’s work has appeared in several prominent shows this year. His sculptures were in the Whitney Biennial and featured in “Landlord Colors: On Art, Economy, and Materiality” at the Cranbrook Museum of Art outside Detroit. Several new pieces were on display last summer as part of “Colored People Time: Quotidian Pasts” at the Institute of Contemporary Art in Philadelphia. The artist is part of a group exhibition at Casa Luis Barragán in Mexico City through December 15 and has a solo show at Kunsthalle Basel in 2020. Though young, Harrison displays both technical acumen and a complex understanding of his themes. Economic, racial, and technological histories all play important roles in his work. He calls his practice “dark povera” in homage to the 1970s Arte Povera movement, because of the parallels between the cycles of postwar boom and bust that prompted labor strife in Italy and the economic decline in Harrison’s hometown Detroit. He also identifies with Arte Povera’s expressive exploration of everyday materials and their relationship to history. “An Arte Povera artist might reference Roman sculptures using low materials,” Harrison said in an interview. “I’m referencing African sculptures in a similar way, from a third-person, outsider perspective, while talking about the macro construction of my identity as a black American.”2

Harrison was born in Detroit in 1989, and the city’s history has shaped his practice and interests. The birthplace of Fordism, the city rose and fell with the automotive industry. Union jobs in car manufacturing provided upward mobility for several generations of Detroiters, especially African Americans. Harrison’s mother worked at the American Axle factory in Hamtramck, making enough to send Harrison to schools outside the crumbling public system. But this was at the tail end of the auto industry’s long decline. In 2005, Harrison’s mom took a buyout from American Axle. A few years later the plant closed down, joining a long list of shuttered factories in Detroit.

After high school, Harrison left Detroit to study at the School of the Art Institute of Chicago (SAIC). But he produced almost no work as an undergraduate. “I couldn’t really afford the things I wanted to make,” he told me, “and I didn’t want to dumb them down.” Instead, he spent his time at SAIC researching, learning from professors such as Michelle Grabner, Hamza Walker, and Shane Campbell, and planning out projects he would work on after school. He knew he wanted to work with 3D printing. On a visit to an automotive factory during high school he had seen a selective laser sintering machine—a predecessor of the 3D printer—producing a car component and was fascinated by the technology. Various forms of additive manufacturing have been in use since the 1980s, but the machinery was extremely expensive. Advances in the industry around the time Harrison graduated from college, however, made the technology more accessible to consumers and hobbyists; kits to build small 3D printers now cost as little as $200.

When he graduated from SAIC, Harrison moved back to Detroit, got a programming job, and lived with his mother to save money. After a few years, the head of the modeling department at Ford saw Harrison working with Plasticine clay at a maker space and offered him a job. Harrison spent the next two years working long days at Ford on automotive models while in his free time building a 3D ceramic printer in his mother’s basement, adapting technologies used in food manufacturing and the concrete industry to build a prototype. The resulting 3D printer, titled The Consequence of Platforms (2016), anchored Harrison’s first major show, which took place at the Museum of Contemporary Art Detroit (MOCAD) in 2016. The printer consists of a three-shaft aluminum frame rising from a triangular slab of white marble. The printer head is attached to three arms that run up and down tracks on the aluminum frame. A long tube of liquid clay sits on the floor next to the machine; an air compressor powers a piston, which drives the clay through a hose into the printer head. Step motors, sensors, and a laptop running open-source software are used to control the machine, moving the hanging printer head over the marble as it squirts out lines of clay. Harrison uses scans of African masks to direct the 3D printer as it creates ceramic copies of the historical objects. The replicas slowly grow from the bottom up as the printer swings back and forth, extruding lines of clay like layers of frosting. The movements are as mechanical and precise as those of an assembly-line robot, but the process creates imperfections in the clay as it flows into place. The transformation from scan to CAD file to ceramic printout loses data about the three-dimensional form. The resulting striated facsimiles are distorted but still recognizable: the echo of an African past processed through modern technology.

Harrison chose clay as a medium because of its porosity and elasticity. Different drying rates affect the pieces, fracturing what the machine has printed out. Some of the African mask replicas are incomplete, as if the printing trailed off mid-process, leaving behind a mess of clay squiggles. In others, only half the mask remains, as if someone split the replica down the middle and took one part away. Harrison also manipulates some of the 3D models before feeding them into the printer, conjoining identical replicas or warping their shape. The printer and its output take several different forms. The 3D printers are kinetic sculptures, whirring and clicking as they move. Harrison’s control of the process is like a performance: he moves around, tweaking this or that detail, checking the laptop, and firing up the air compressor to keep the clay flowing. The printed replicas are left to dry on aluminum stands, slowly changing over time. Harrison fires the pieces once they dry, transforming the pliable material into a solid object that is both a replica of an art historical relic and a sculpture unto itself.

“I’m fascinated by the potential that modernism has to be simultaneously an instrument of oppression and the semblance of purity,” Harrison told me. Throughout his work, he juxtaposes premodern and natural objects with contemporary design and technology, drawing connections that are often hidden. “There’s an aesthetic of Mies van der Rohe and Adolf Loos in the machines I make.” To display his ceramic and acrylic works, Harrison constructs sleek pedestals out of acrylic and anodized aluminum. Inspired by Belgian industrial design, the stands hint at a subtle tension between European technological progress and the brutal colonialist regime in the Belgian Congo.

Following the MOCAD show, Harrison expanded his experimentation with African artifacts and animal skeletons. He produced several resin pieces for “Songs for Sabotage,” the 2018 New Museum Triennial in New York, as well as for a solo show titled “Prototype of Dark Silhouettes” at San Francisco’s Jessica Silverman Gallery, which represents him. The sculptures resemble vitrines in a natural history museum but his manipu-lation of artifacts does not have the same reverence. Harrison sanded down some of the African totems to reveal a wooden cross-section. He built a CNC router to cut patterns into the resin’s vitreous surface, juxtaposing ghostly outlines of industrial components with patterns from the cosmology of the Dogon, an Indigenous tribe in Mali. Neither these patterns nor the resin-encased objects are labeled in any detail. We know they are from Africa but not from which part. They communicate more affect than information: a sense of the destructive relationship between modernism’s progress and the exploitation of the African continent.

In his book Specters of Marx (1993), Jacques Derrida coined the word “hauntology” to describe the ways lost or foreclosed futures haunt the present. The late theorist Mark Fisher made this concept a mainstay of his writings on culture. In a 2013 essay on UK trip-hop artist Tricky, Fisher describes hauntology and Afrofuturism as “two sides of the same double-faced phenomenon.”3 He goes on to apply Derrida’s concept to the African diaspora’s relationship with modernity. Hauntology, Fisher writes, confronts white culture with “the kind of temporal disjunction that has been constitutive of the Afrodiasporic experience since Africans were first abducted by slavers.” Slavery and colonialism, he argues, are not leftovers of premodern societies but actually modernity’s exploitative logic arriving in Africa hundreds of years before conquering the rest of the world. “Who were the first victims of future shock,” Fisher writes, “if not the African slaves?” The philosopher Achille Mbembe put it another way. “A plastic subject, who suffered a process of transformation through destruction, the black man is in effect the ghost of modernity.”4

It is tempting to describe Matthew Angelo Harrison’s work as Afrofuturist, since it explores African culture, and the experience of the African diaspora, through the lens of technology. But Harrison is wary of the label. He feels his work reflects the technological world as it is today, rather than implying some imagined future. “It’s not escapist,” he said. “I’m using technologies that best define today and connecting them to the trail of my own diasporic fragments.” In doing so Harrison brings together a complex tangle of references: the exploitation of Africa, additive manufacturing, the Middle Passage, modernist design, industrialization, and African American culture. His work operates through a different experience of time, thick with what Fisher calls the “temporal disjunction” that hauntological artists foreground, and you could say Harrison is creating his own dark hauntology. It is a body of work that invokes questions about black identity in the United States and its relationship to African history, and through Harrison’s deft execution, reminds viewers that cutting-edge technologies are still haunted by the ghosts of modernity.

2. All quotes by Harrison are from a telephone interview with the author, July 27, 2019.