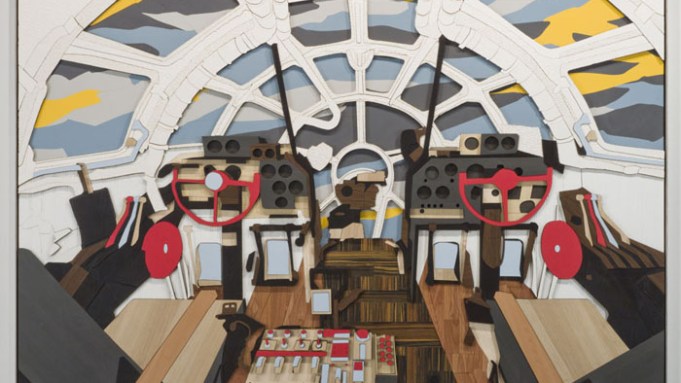 “In Search Of,” Matthew Day Jackson’s recently opened exhibition at Peter Blum’s galleries in Chelsea and Soho, centers around a 30-minute video based on the late 1970s television series of the same name, hosted by Leonard Nimoy and exploring paranormal mysteries. In Soho the artist shows a vintage work. Jackson’s most recent works, on view in Chelsea, explores the epistemological question, intoned in a didactic drone by the narrator at the beginning of the video, of “who we are, where we come from, and what lies in our future.”

Attempts to answer this question here rest in an exploration of personal and public mythologies. Two large sculptures, one a steel curio case and the other a re-constructed Skip Nichols race car frame, are joined by five hanging mixed-media works constructed out of domestic materials, and photograph entitled Me, Dead at 36 (2010) that depicts Jackson in a burlap bag, as if his body was being prepared for a military funeral. The works serve as a mirror to the outside world by reinforcing, as Jackson told me during a walk-through, “the way we express ourselves through material objects. The textures and iconography of these materials, the way that we cut our hair, the make-up we wear, all of this stuff that we absorb from the world around us. The parts of our identity that are constantly changing, constantly moving the way that we see ourselves…”

Jackson is an artist without an off button, one who claims to constantly absorb information that he uses for his work. “I very, very firmly believe that the time that you’re making art isn’t the time that you’re an artist,” he said. “You’re an artist all of the time in-between, when you’re experiencing new things, when you’re absorbing stuff from around the world. When you record what you’ve seen, you’re just being a stenographer.”

This theme that the artist is not present, is only ever absent, runs through all of the works in the show. At the entrance to the exhibition, stacked up on the gallery desk, are true-to-life newsprint copies of the front page of The New York Times dated September 16, 2006. Nestled in between the headlines such as “Military Lawyers Caught in Middle of Tribunals” is a photograph of Matthew Day Jackson’s abandoned van, with a caption that describes his disappearance upon his return to New York after a long road trip.

In the main room, Study Collection VI, a monumental, 19-foot-long stainless steel shelf dominates one wall. Broken into unlabeled sections that Jackson told me represented his head, chest, hips, femur, shin and feet, he describes the piece as “a way to make a figural sculpture.” The sculpture displayed therein include plaster casts of his likeness described by a forensic artist, a tree root cleanly hacked off to fit the size of the shelf, and a reproduction of a pillar from Mies van der Rohe’s Barcelona Pavilion. Jackson describes these objects, many of which he jokingly says were pulled from his “magical pile of junk,” as “things that relate to thought, and maybe to our skull. They are objects that relate to our soul, our hope or our libido, or maybe the way that we stand firmly planted in the ground. They’re all sculptures in and off themselves, but without the support of their neighbors, they would be like little tschotskes.”

Jackson differentiates himself from a tradition that includes Joseph Beuys and Robert Naumann, of artists who have successfully cultivated personal mythologies. “[I’m] interested in ‘me,'” he explains. “I think to kill myself, or to make myself dead in my artwork is to leave the artist part behind, the artist as human. Because when I make art, I’m not even in the room.” Jackson’s artwork, rather than being an expression of direct authorship or application of hand, is rather a vehicle for him to express his ideas.

Intentional or not, this idea of someone, inextricably linked to Jackson, “having been there” haunts all of the works in the exhibition. In August 6, 1945 (2010), a work constructed entirely out of domestic materials like Home Depot wainscoting and Ikea flooring, the inside of the B29 that dropped the atomic bomb on Hiroshima is pictured in a state of abandonment. There are no humans in the cockpit, although there is a foreboding sense that someone is meant to sit in the chair and pull back the lever to release the bomb that will wreck havoc on a city full of unsuspecting Japanese people. In Enola Gay (2010), charred remains of wood are glued together to form an aerial landscape, which Jackson revealed to me as Hamburg, the first city where the RAF created a firestorm at the end of World War II. In both works, human beings are implicitly involved in the destructive events that each piece represents, but they aren’t present to atone or to explain them. Jackson vacates himself from the work, leaving viewers to claim agency.

The video, In Search Of (2010), is a riveting, tongue-in-cheek, faux documentary that expounds upon the theories on mythology, materialism and the changing conception of self proposed in the rest of the exhibition. Differentiated into three parts by the interruption of an Audi commercial, it is compiled from stock footage and images from the Getty database, staged interviews with intellectuals such as David Mindell, a historian and engineer at MIT, and narration by David Tompkins, who approaches his role as host of the series with the hilarious solemnity of an evening newscaster. In the first part, the anthropological forms in cloud shapes found in the “first color footage” of the earth taken from the moon raise questions about mythologies written in the landscape of the earth. In the second part, the mysterious disappearance of Matthew Day Jackson highlights the strange nature of the daily objects that we leave behind as artifacts of our existence. In the third and final part, a new civilization is revealed by artifacts found in an archaeological dig referred to as the “Eidolan Find.” All of the situations in the video are fabricated, using the trope of a Discovery Channel program, and are woven together to form a commentary about discovering how we, as individual participants in modern culture, define ourselves by the objects that surround us. STILL FROM IN SEARCH, 2010.

As I concluded the film, Jackson sat down next to me. “It’s not really about searching,” he told me, over the music of the credits. “It’s about reaffirming where we really are. It’s not about going someplace to learn about that place, but rather to bring ourselves there.” And more than anything, he said, “That is the thread, the way that things are made. That they always come from the same place, to create a clearer picture of myself to who I am.”

‘Triangle of Sadness’: Vomit and Shit and Class Warfare, Oh My