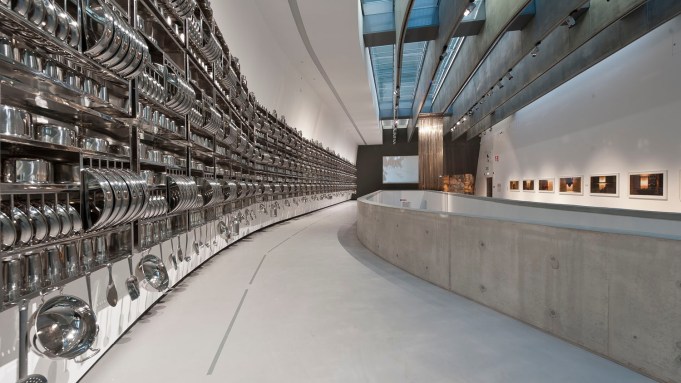 In its latest incarnation, at  MAXXI in Rome through Jan. 29, the traveling exhibition “Indian Highways” shows how contemporary Indian art reflects frenetic national change, as well as the ways in which Indian artists are adopting European influences. Rome is the fifth stop in Europe for the exhibition, which first showed at Astrup Fearnley in Oslo. The show presents 60 works by 30 artists.

In Circumference Forming (2011), one of four site-specific installations at MAXXI, Delhi-based Sumakshi Singh reconstructs, or rather deconstructs, a hallway of the museum into an archway of a Gothic church. The height of the hallway and the vaulted ceilings Singh installed are impressive; in some sections the walls are completely stripped of paint, leaving concrete with suggestive bits of wallpaper clinging to it—the hands of angels holding a Bible, or the robes of Franciscan monks. Such images suggest the decay of tradition and the resulting rupture in our experience of time. The space leaves the viewer with a sense of unease—the sacred reduced to torn bits, walls interfered with by seemingly deliberate vandalism. Our instinct is to worship, but we are confused about how and what to revere.

Although Circumference Forming does not overtly reflect the manifesto of “Indian Highways,” which claims to provide “a 360º portrait of the subcontinent and its miracle,” it uses the European tradition to highlight violent rupture with the past.

Tejal Shah and Bharti Kher also referenced European art in their work. For Hysteria—Iconography from the Salpêtrière Series (2007-09), Shah was inspired by Jean-Martin Charcot’s disturbing photos of the insane taken in the 18th century at the Salpêtrière hospital in Paris. Shah, dressed as a patient in a long black 18th-century European dress photographed herself looking dazed in various contorted poses.

London-based Kher, invoking the brutish mythological figures depicted by Bosch, Goya and Blake, presents An Absence of Assignable Cause (2007), a massive fiberglass sculpture of the heart of a blue whale. The sculpture is covered in bindis, the traditional ornament applied by Hindu women to their foreheads. According to Hindu tradition, the position of the bindi on the forehead marks the exit point of kundalini energy, or the power of desire coiled within. In this work, the bindi is misconstrued as a symbol of wedlock and domestic subservience. Kher’s work reclaims the bindi as a symbol of power. The Indian woman is equated with the raw power of a rare, monstrous creature, well known not only in India but also abroad.With the economic boom, women in India have more opportunities outside of the home, and Kher’s sculpture reflects this channeling of feminine energy into arenas where it might be freer to unleash itself.

Two works by Subodh Gupta, which take up a massive wall and an entire floor of MAXXI, are of particular resonance. Take off Your Shoes and Wash Your Hands (2008) features shelves containing a grandiose display of shiny aluminum kitchen utensils. This reflection of the sort of kitchen the new Indian middle-class aspires to contrasts with Gupta’s adjacent reconstruction of a legal office of a bygone age. There is something both tantalizing and repulsive about each of these presentations. The hygienic appearance of the shiny utensils evokes domestic order and prosperity, yet the sheer quantity and the arrangement of the utensils is disturbing, so perfectly in order that they appear uncanny.

The opposite effect results from Gupta’s Date by Date (2008). The clattering of an old ceiling fan, the tiffin boxes wrapped in red cloth, and the cabinets secured by locked chains all suggest a human presence, and there is a comforting accumulation of the past in the stacks of old documents heaped everywhere. Any Indian would feel a sense of ease and familiarity in this setting, yet the space also smacks of inefficiency, recalling the struggle to get anything done in Indian bureaucracy. In presenting the wall of utensils and the legal office side by side, Gupta creates an immediate tension between the problems of the past and the future, provoking us to think about how to preserve a nuanced identity while making necessary steps forward.

Salud, Skoal and Cheers — The Best Whiskies to Drink on World Whisky Day