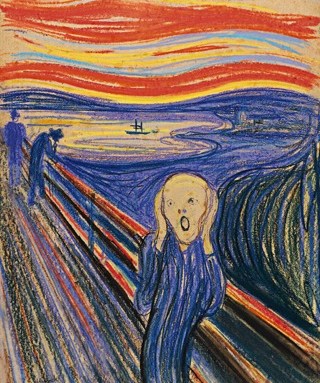 Sotheby’s and Christie’s in New York are hoping to find new homes for over a billion dollars’ worth of art at their May sales over the next nine days. Despite lagging economies throughout much of the West and perhaps buoyed by rising markets in Asia and the Middle East, the houses have brought together an impressive roster of offerings, including a version of one of the world’s best-known artworks.

Sotheby’s May 2 Impressionist and modern evening sale is estimated to bring $245.9 million–$322.7 million with 76 lots. Sotheby’s projects they will double Christie’s expected results: Christie’s estimates $99–$142 million on a slimmed-down 32 lots at its May 1 Impressionist and modern evening sale. Christie’s department chairman Thomas Seydoux announced last month that he will resign after this season in favor of private dealing.

“The mood is good-perhaps surprisingly given the ongoing turmoil in world economies, the art market seems to be marching to the beat of its own drum,” said private dealer Christopher Eykyn. “It’s marrying the great works and great values that creates the sparks that the world expects from auctions.”

The week before the sales, both houses offered previews for the press. At Sotheby’s, which has been the target of protests from the Occupy Museums group due to its dispute with unionized art handlers, there seemed to be a guard at every corner. In a departure from custom, the presale viewing is not open to the public.

“Now I know how Paris Hilton feels,” quipped Sotheby’s Impressionist and modern department head Simon Shaw as he faced the glare of numerous television cameras’ lights turned toward The Scream (1895), the pastel version of Edvard Munch’s masterpiece that will be the star offering May 2. Sotheby’s devotes no fewer than 23 pages of its lavishly illustrated catalogue to the Munch work, which brought crowds to public viewings in London.

“All eyes are on The Scream,” Eykyn said, “but the air gets very thin at $80 million. It represents an opportunity for buyers looking for a real icon. You’re not going to get another chance like this, and that’s often enough to generate the kind of excitement they’re looking for Wednesday night.”

Among art history’s most recognizable images, the work is estimated by Sotheby’s to sell for as much as $80 million, though, as reported in the New York Times, British bookmakers Ladbrokes are giving three-to-one odds that it will bring $150–$200 million. The most expensive artwork ever to be sold at auction is Pablo Picasso’s 1932 Nude, Green Leaves and Bust, which sold at Christie’s in 2010 for $106.5 million.

Other highlights of Sotheby’s evening sale will be Picasso’s 1941 portrait of Dora Maar, Femme Assise dans un fauteuil (est. $20–$30 million), a half-length portrait in acid hues. That estimate seems modest compared to the $95.2 million brought by Dora Maar with Cat, a canvas from the same year, at Sotheby’s in 2006, but the current painting is slightly smaller. The painting now on offer comes from the estate of Theodore J. Forstmann, a New York financier who died in November.

Also from the Forstmann estate is Chaïm Soutine’s Le Chasseur de chez Maxim’s (ca. 1925), estimated at $10­–$15 million. This half-length portrait of a bright-red-clad employee from the fashionable Paris restaurant. Forstmann paid a record price of $6.7 million for the painting at Sotheby’s in 2004, when it was on offer from the estate of Wendell Cherry, the vice chairman of health services company Humana Inc., which ran a nationwide hospital chain and sold health insurance.

The headliner at Christie’s Impressionist and modern sale tonight is Paul Cézanne’s 1892–96 watercolor study Joueur de cartes, which resurfaced this spring in the Dallas collection of Dr. Heinz F. Eichenwald. For decades, its whereabouts were unknown, and it appeared in the catalogue raisonné only in a black-and-white reproduction. It may bring as much as $20 million.

Other highlights will include a 1943 Salvador Dalí, Sans titre: New Accessories (Apparitions et équilibres en perspectives), estimated at $3–$4 million. Sotheby’s is also offering a work by the Spaniard, Printemps Nécrophilique (1936), which features a woman standing by a cypress tree before a blank landscape, her head replaced by a bunch of flowers. That figure inspired a dress design by Paris couturier Elsa Schiaparelli, a Dalí collaborator. Due partly to its relatively large size, the work is estimated at $8-12 million.

When the action turns to the contemporary masters next week, a stunning 1961 Mark Rothko, Orange, Red, Yellow, with feathery brushwork and radiant, floating rectangles, will be one of the main offerings at Christie’s on May 8. It comes from the collection of David Pincus, which also is offering strong examples by de Kooning, Barnett Newman, Clyfford Still and others, collected in concert with his wife, Gerry.

Orange, Red, Yellow comes five years after the trophy of Rothko’s White Center (Yellow, Pink and Lavender on Rose) sold for a record $72.8 million at the height of the art-market boom. Many art market experts think that painting was headed to Qatar. During the public preview, art advisor Jennifer Vorbach averred that Orange, Red, Yellow looked majestic. “And auction houses always light Rothkos poorly,” she said, “so if it looks this good here . . . “

Also at Christie’s is the nearly 10-foot-wide FC1 (Fire Color 1) by Yves Klein, from 1962. Estimated at $30-$40 million, the work shows the figures of two women emerging, perhaps dancing or elevating, out of the work’s blue and gold surface, which is scorched in places as a result of Klein’s exploration of elemental forces.

Also on offer is Number 28, 1951, a Jackson Pollock abstraction in gray, black and white with dramatic impasto. It’s estimated at $20–$30 million, but, according to New York dealer Joan Washburn, who represents Pollock’s estate, “The auction market for Pollock is odd. Everyone wants Lavender Mist.”

A trio of contemporary masters will be go on sale the following night at Sotheby’s. Andy Warhol’s Double Elvis [Ferus Type], from 1963, based on a movie still of the singer pointing a gun at the viewer against a silver background, is estimated at $30-$50 million. A pristine Roy Lichtenstein canvas, Sleeping Girl (1964), showing a comic-book blond with down-turned face, is expected to bring $30–$40 million.

Completing the trio is Francis Bacon’s Figure Writing Reflected in Mirror from 1977, which was featured in an exhibition that year at Paris’s Galerie Claude Bernard. It’s thought to show Bacon’s lover, George Dyer, who had committed suicide six years before. It is also expected to bring $30–$40 million, a range that seems to be, as specialist Grégoire Brillault joked at a press preview, “the estimate of the season.”

30 High-End Gift Ideas From Black-Owned Brands, From Bourbon to Bedding