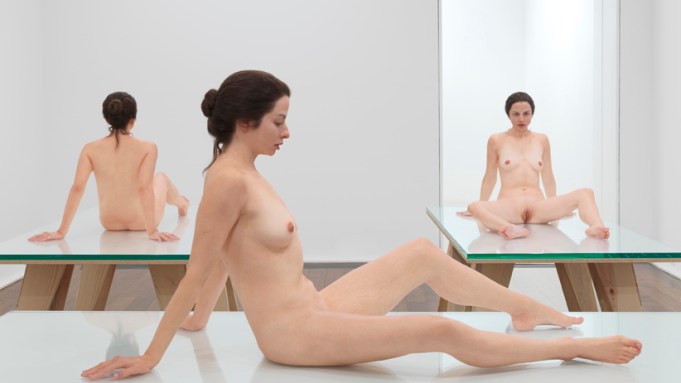 It’s the season of Paul McCarthy in New York. This spring and summer McCarthy’s unsettling work—much of it a perverse reworking of children’s fairy tales—will be the subject of six installations at five different locations around the city, not counting the Los Angeles-based artist’s 21-year-old animatronic sculpture of a father instructing his son on the ways of love with a goat, which is already on view at the New Museum as part of the exhibition “NYC 1993” (through May 26).

McCarthy’s 80-foot-tall, fire-engine red inflatable Balloon Dog (2013), on display at the Frieze art fair on New York’s Randall’s Island for most of the past weekend, is perhaps the most talked-about example so far. An obvious allusion to the stainless steel “Balloon Dog” series (1994-2000) by Jeff Koons, whose works are also currently on display at multiple locations worldwide, including New York’s David Zwirner Gallery and Gagosian Gallery (both through June 29), McCarthy’s dog could be read as a critique of Koons’s art as puffed-up with hot air, or as a wry comment on art fairs in general.

Either way, a more fitting end to McCarthy’s provocation could scarcely have been planned: high winds forced fair organizers to take down the towering dog. By Sunday, it was a deflated heap in the grass.

Back in Manhattan, McCarthy’s large wooden sculptures based on Snow White—though significantly more twisted—haunt Hauser and Wirth’s massive 18th Street gallery in the show “Sculptures” (through June 1). The works re-imagine characters from the fairy tale using archetypes familiar from McCarthy’s practice, including a sexualized sleeping princess and a cast of big-nosed dwarves. The grotesque figures, some as tall as 14 feet, were computer-modeled before being carved in dark walnut.

Abject imagery dominates the rest of the space, with raunchy line drawings covering some of the walls. On another wall hang nine square panels loaded with brown globular foam that conjures such unappetizing referents as feces, congealed hamburger meat and a metastasizing tumor.

Overlooking the shore a few blocks away at Hudson River Park is McCarthy’s more family-friendly—but somehow no less sinister—public sculpture Sisters (2013). Bronze statues of disembodied princess heads are installed among saccharine-sweet sculptures of squirrels and bunnies (through July 26).

The perverse fairy tale is scheduled to continue through the summer. From June 20 to July 26, McCarthy’s sculptures at 18th Street will be replaced with Rebel Dabble Babble (2013), a combination installation/video by McCarthy and his son, Damon. According to press materials, the work will offer a complex and unsurprisingly demented take on Nicholas Ray’s Rebel Without a Cause (1955) and the off-set relationships surrounding its production. The cast of Rebel Dabble Babble includes McCarthy, his frequent collaborator Elyse Poppers and the actor James Franco, among others.

Starting June 19, the Park Avenue Armory will exhibit McCarthy’s largest installation to date, WS (2013), which, like the wooden sculptures, will also be based on Snow White (through Aug. 4). According to an Armory press release, the installation will include video projections, a fabricated forest and a three-quarter scale house modeled after McCarthy’s childhood home. It’s restricted to visitors over 17 years old.

So far, the most challenging work is in “Life Casts,” the show at Hauser and Wirth’s 69th Street gallery (through July 26), where McCarthy is showing hyper-realistic replicas of himself and Poppers, stark naked.

The mimesis is unsettling. For two of the sculptures, Horizontal (2013) and T.G. Asleep (2013), McCarthy and Poppers, respectively, are represented supine, laid out on two tables with their eyes closed. (T.G. is an acronym for “that girl.”) Poppers’s replica appears to be asleep; after staring at it long enough, one could swear it had taken a breath. Horizontal, conversely, with its rigid positioning, gray hair and pallid skin, recalls a body at the morgue.

In the middle room, we find T.G. Awake (2013), an installation that comprises three more replicas of Poppers’s body, still naked, but now sitting upright. Each figure is positioned slightly differently, like a series of film stills. In the first, her gaze is downward and tentative, as though she’s deciding how much to give of herself. In the second, she lifts her dead-eyed gaze slightly, pushes her shoulders back and her knees apart. By the third, it’s as though she’s thought better of any sexual overtures: her knees come closer together, her lips open slightly. Her gaze becomes unsure again, perhaps regretful.

“She’s in a kind of state of unreal,” McCarthy, 68, told A.i.A. at a press preview at the uptown gallery, noting that the realism he and his team had achieved was as precise as they could get for now, but still not perfect. “So she’s real, but she’s unreal,” McCarthy continued, “because it’s not exactly there, yet.”

Upstairs, videos of the replica-making process reveal Poppers in motion, posing naked in front of multiple video cameras, being slathered with silicon or having her shifting silhouette repeatedly traced onto a table. More than merely pulling back the curtain on a process, the videos infuse the sculptures with something of what Roland Barthes called the “noeme” of photography—that irreducible truth of the medium (no longer strictly true in the age of Photoshop) that says “the thing has been there” (Barthes’s italics). We become aware that Poppers was there, and that she will never again look exactly the same way she looked when her body was cast.

“There’s a number of layers” of meaning to the life casts, McCarthy said, comparing the process of creating them and looking at them to peeling away the layers of an onion. “You’re going deeper, and you’re going deeper for reasons,” he added. “I’m not making a sex doll. I think the pieces are capable of putting somebody in a different place.”