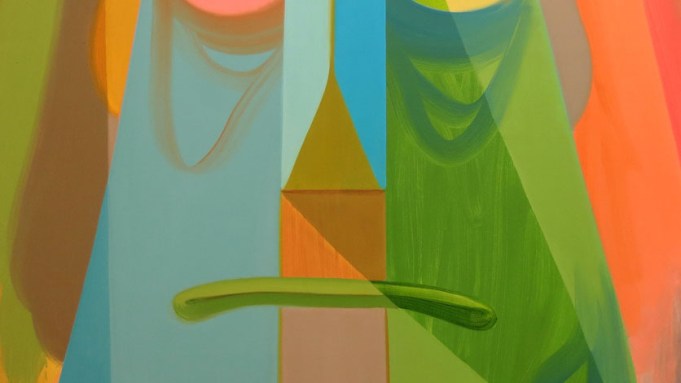 Making a case for figurative painting in the contemporary art scene, last week The Hole gallery in downtown New York opened “Chicken or Beef?,” a group exhibition of works by more than 30 contemporary American and European painters.

Named for the age-old mealtime question aboard transatlantic flights, the exhibition was curated by Jesper Elg, co-founder and director of V1 Gallery, in Copenhagen, which has exhibited forceful work by several of the artists in the show, including Katherine Bernhardt, John Copeland, HuskMitNavn and Geoff McFetridge.

“It seems like right now, what’s kind of in favor and flavor is more like a conceptual minimalism,” Elg told A.i.A. “There are so many talented people right now working with such different styles,” he added, “but they’re really working at developing a new language, which I think is exciting.”

Taken together, the paintings are an experiment in contemporary form and process. Well-established painters anchor the show, like Cecily Brown, whose Chestnut and Snowball (2013) offers an undulating image of two embracing rabbits that seem to reproduce in real time in broad, expressionistic brushstrokes; in Barnaby Furnas’s The Gutter #1 (2012), we see a sleek, top-hatted man flaying a whale, an uneasy, futurist depiction of cool, impersonal violence.

Meanwhile, emerging artists, many of whom might count painters like Brown and Furnas among their influences, instill the show with a cross-generational sense of history-a didactic seriousness not typical for The Hole. Works are accompanied by wall texts to educate insiders and outsiders alike-a practice as rare in a downtown group show as it is refreshing.

Work like Todd James’s painting of a Somali pirate on a cell phone, Press or Say One (2012), and the frolicking nudes of Devin Troy Strother’s “Bitch sit still, I’m trying to render right” from: The life and time of a nigga named Tyrone (2013), engage the viewer in their own, distinct brands of socio-political deconstruction. Ella Kruglyanskaya’s two surrealistic paintings, Anna Banana (2011) and Lips and Legs II (2012), seem to disassemble female sexuality into interchangeable parts.

Other works are aesthetically exuberant, reveling above all in texture and color. Ryan Schneider’s How Long Have You Known? (2013) transforms a Gaugin-esque nude on the beach into crisp, rich colors and distinct, two-dimensional shapes that compete for perspectival authority and attention. Rosson Crow’s JFK Funeral Flowers (2012) is more impressionistic and abstract than much of her past work, ambiguously evoking floral bouquets and blood spatter.

Elg insists the exhibition is as an “open question”-an inquiry into the limits and possibilities of figurative painting in the 21st century.

“I just hope that figurative painting will get the recognition it deserves,” Elg said. “It’s kind of silly to declare that something is uncool… For me it was interesting to be given the chance to do this in New York where it seems like it has been quite out of favor for a while.”