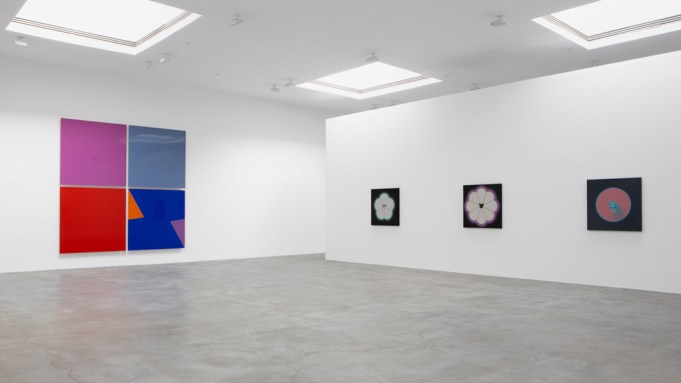 I love the elasticity of a summer group exhibition; it’s a low-stakes, high-reward format that, when done well, can produce the most exciting viewing experiences at New York galleries. An irreverent approach is key to these gatherings. Larger museums exhibitions—be it MoMA PS1’s “Greater New York” series or the Whitney Biennial or even the recent soup-to-nuts “Like Life: Sculpture, Color, and the Body (1300-Now)” at the Met Breuer—speak with an institutional voice, and often have a historical imperative. That’s not the case at galleries, nor is it the point.

Bellatrix Hubert’s 2012 “Stand Still Like the Hummingbird” at David Zwirner remains a touchstone for me. Titled after a collection of Henry Miller’s writings, the show presented a dizzying selection of paintings, photographs, sculptures, and video works that engaged with—and often subverted—notions of time and gravity. Hubert included a diverse range of artists—Tomma Abts, Rodney Graham, Bruce Nauman, Cady Noland, and John McCracken, among others—with minimum fuss and without forcing any ideas, creating the low-key magic that only this type of show can deliver.

The standout group exhibitions in Chelsea this summer include two surveys that focus squarely on the strength and dynamic range of contemporary painting: “Painting: Now and Forever, Part III,” at Matthew Marks and Greene Naftali through August 17, and “The Surface of the East Coast: Supports/Surfaces from Nice to New York,” at Josée Bienvenu through August 24. Collectively, these shows include close to fifty painters, each of whom brings new energy to their chosen medium.

“Painting: Now and Forever, Part III” is the latest edition of a once-in-a-decade painting survey first organized by Pat Hearn and Matthew Marks in 1998 (the second show was put together by Carol Greene and Marks in 2008). None of the editions has had a theme per se; rather, painting itself has been the common denominator, as seen through the eyes of a few New York gallerists. Appropriately, then, the surveys have widened in range over the years, featuring more international and more female artists. The 2018 iteration—twenty-five men, twenty-one women—includes lesser-known painters from Japan, China, and India, in addition to big American names like Jasper Johns and Alex Israel. The selections at both venues reflect heavily on the respective galleries’ rosters.

At Matthew Marks on 22nd Street, I was introduced to the work of ninety-seven-year-old Los Angeles-based artist Luchita Hurtado, whose surreal, forced perspective paintings (all from the 1970s) are dreamlike and spare. Bulto (1976) recalls the myth of Icarus, depicting a suspended, weightless poof of feathers in the shape of a human body set against a blue and white sky. These seven feathers are full of the potential for movement but are here paused—forever still, forever falling—in time and space. (Hurtado, whose work has been underrecognized for decades, has a suite of similarly themed paintings in this year’s “Made in L.A.” biennial, on view at the Hammer Museum in Los Angeles through September 2.)

A room of works by Howardena Pindell and Johns is near perfect. Pindell’s white confetti-cake stunner Untitled (1975) hangs directly across from her saturated teal Songlines: Labyrinth (Versailles), 2017, the shape of which looks like a stretched hide. Pindell’s signature circular punches are echoed in the pale blue polka-dot border of Johns’s blushy Untitled (1992). This pairing could have been an inspired, jewel-box show of its own.

On the other hand, a progression of smaller rooms at the rear of Greene Naftali’s space makes for focused, intimate viewing. In the final room, a trio of Monika Baer’s buttery acrylic and quartz canvases—each tethered to the wall on an aluminum security leash—are cleverly coupled with Rachel Harrison’s Before You Have To (2018), a free-standing sculpture comprising a wooden pallet, a stool, an elephant figurine, mesh shorts, and a hat. In each work, Baer and Harrison isolate familiar elements in whimsical ways, which despite their new formal arrangement, continue to suggest touch and movement.

As its title suggests, “The Surface of the East Coast: Supports/Surfaces from Nice to New York” recontextualizes the short-lived but highly influential French Supports/Surfaces movement within a new generation of American artists who share its formal and philosophical concerns. The twelve painters (all men) involved in the original movement, which thrived in the late ’60s and early ’70s, were set on deconstructing the elements of painting while retaining its sensual appeal. “Their reflections on what constitutes the essence of painting led them to question materials,” curator Marie Maertens writes in the foreword of the catalogue published for the first iteration of the exhibition, which was presented at the Le 109 Contemporary Art Center in Nice last summer. “Stretchers and canvases were dissociated, henceforth leading a separate existence, each was examined for what it was.”

American artists Mark Barrow & Sarah Parke, Adam Henry, and Lucas Knipscher—all of whom participated in the Nice exhibition—are here in dialogue with Marc Devade, Nöel Dolla, and Claude Viallat of the original Supports/Surfaces movement. The historic works (all created between 1970-1973) remain impossibly fresh today, easily holding their own alongside those made within the past five years. Devade’s Untitled (1973), for example, is paired with Henry’s Untitled (IAi4iAI), 2018. Devade’s perfectly square canvas recalls a blown-out gingham pattern, wherein two blue bands converge to form a block of the same color with twice its intensity. Henry’s grid in a similar blue, which looks as if it were spray-painted, provides an equally vibrant counterpoint; they make a gorgeous May-December couple.

Supports/Surfaces artists often subtracted materiality from color, all the better to stress a work’s material support. A painting and sculpture by Viallat, which both employ a knotted mariner’s rope, illustrate this strategy well. In 1971/062 (1971), the rope creates a transfer lattice pattern that seems to hover over an unstretched canvas like an optical illusion. 1971/C14 (1971) is more direct: dyed with red ink, the rope hangs from the ceiling, and gathers in a coil on the gallery floor.

This sort of creativity—or creative deconstruction—can be infectious. Henry is quoted in the catalogue as saying, “One of the things I really appreciate about this group of artists is that they were not trying to destroy painting; they were looking to expand it.” That forward-looking, experimental instinct is what propels “The Surface of the East Coast.” You might say the same of “Painting: Now and Forever.”