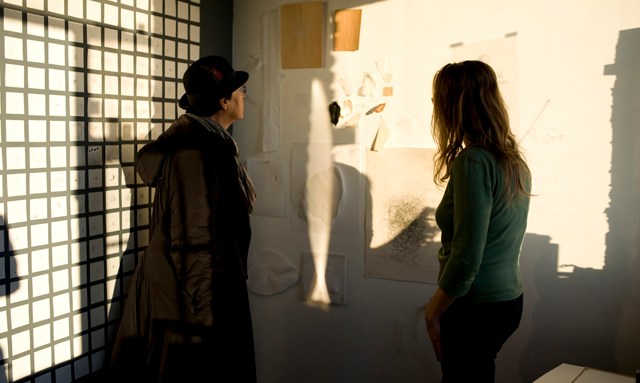 Still shy of 7 AM on a Saturday morning, Adam de Boer had just opened his Chinatown warehouse studio to art collector Mera Rubell. For a young artist like de Boer—a 25-year-old figurative painter and recent graduate of the University of California-Santa Barbara—the attention might have felt as puzzling as flattering.

VICTOR EKPUK AND MERA RUBELL, ALL PHOTOS BY JENNY YANG

You could forgive Adam de Boer for his unguarded question for Rubell. “What are you looking for?”

Rubell was visiting Washington, D.C., on a quixotic campaign that can only be described as a massive studio crawl. Beginning before sunrise this past Saturday morning, Rubell began the first of 36 studio visits she would conduct over a consecutive 36 hours, a whirlwind effort to select artists for her section in the Washington Project for the Arts’ 2010 Annual Art Auction Gala. Many of the artists she visited might have thought to ask the same question as de Boer (whom Rubell selected for the auction). A slightly different question seemed equally pertinent to de Boer’s: Why was she looking here?

In fact, the Miami-based Rubells—Mera and Don—have recently expanded their footprint in the nation’s Capital. In 2002, the Rubells closed on a 13-year effort to acquire the Capitol Skyline Hotel, an eclectic seven-story hotel in Southwest designed by Morris Lapidus, the architect responsible for the Fontainebleau Hotel and other Neo-Baroque properties along Miami Beach (and a friend of the Rubells). They filled the public hotel rooms with furniture by Frank Gehry, Eero Saarinen, Philippe Starck, and other design heavyweights. At the same time, the Rubells began admitting artists from a number of D.C.-area galleries into their world-class art collection.

“The reason we even bothered to find a business [in D.C.] is that the art is amazing,” says Mera Rubell. “A hotel is a natural place to create a kind of home. I want artists there—it’s exciting for my existence here whenever I’m here.”

In Fall 2010, the Rubells will bring “30 Americans”—a survey of works by African-American artists from the 60s to the present owned by the Rubells—to the Corcoran Gallery of Art. Sarah Newman, curator of contemporary art for the Corcoran, said the show will be “scaled down and reconceived” to fit the museum, with work by “foundational, seminal figures”—among them Robert Colescott, David Hammons, and Basquiat—anchoring rooms with works by artists influenced by those “Old Masters.” The exhibit, which opens in mid-October, is bound to find a profound relevance in Washington, D.C., known locally as “Chocolate City” and host to the nation’s first black First Family. (LEFT: LISA GOLD, MERA RUBELL, NOVIE TRUMP)

The WPA received around 200 applications in response to a call for submissions, from which they selected 36 artists at random for visits. “It was not the supposed ‘best’ I saw,” said Rubell, “but I was very impressed. They had to rise to the occasion. There was a tremendous amount of dignity in their professional practice. It was not about a sale.”

(One of the best will be included anyway: Dan Steinhilber, the first D.C. artist collected by the Rubells, will enjoy special Rubell alumnus place in the show, which opens on January 30 at the American University Museum at the Katzen Arts Center, before the March 6 auction.)

Rubell’s attention was not lost on the artists she visited. The Rubells collect Jeff Koons and Glenn Ligon; collectors of their stature do not troll this city’s studios, which are scattered between warehouses in Northeast and Northwest, units in the suburbs, and—to be sure—artists’ apartments. “Mera knows how to look at some art,” explained Mary Early—a sculptor admitted into the auction—after she invited Mrs. Rubell into her studio for a bracing 5:45 a.m. Saturday morning visit. “She had more insight than most curators and collectors who’ve visited my studio in years.”

“I think they expected me to reach into the artists’ contacts I have,” said Rubell, discussing the WPA invitation to curate part of the organization’s auction. Rubell acknowledged that she had had little exposure to local artists or their studios before the tour. “When my husband and I travel, we ask ourselves, what goes in Beijing? What goes on in Warsaw?” she explained. “Why can’t I come and see what goes on in D.C.?”

A severe schedule meant that Rubell and invited guests—I embedded with the collector, WPA director Lisa Gold, and Corcoran photojournalism student Jenny Yang for the Saturday—sunrise leg of the studio visits-had to get down to business. Twilight studio visits did not always accommodate. Photographer Victoria F. Gaitán, who saw Rubell well after midnight on Saturday night, noted that a “huge beefy Marine” and a petite woman were engaged in a drunken fight at a party taking place in her Arlington, Virginia, apartment lobby when Rubell arrived.

Minutes after stepping into de Boer’s studio, Rubell began a percussive volley of questions that probed matters beyond practice. She asked him about his travels in Nicaragua (the subject of much of his work) and the two discussed his faith-an intimate discussion, given that studio visits typically consider archivability, not eternity. Rubell saw connected his work to the Leipzig painters. De Boer admitted to being embarrassed to work in a representational vein. Rubell sympathized with de Boer’s experience with the problem of painting: “Who gives you permission? Who makes it OK for you to do this?”

By hour 37, Rubell had arrived at some conclusions about the art scene in D.C. “I think they’re hungry for community. I’m not saying it’s unique to D.C., but it’s the reason so many artists go to New York.” Less prosaically, Rubell offered what she perceives to be the impact of international museums on local artists. “This is a place with some of the greatest museums on earth. But artists aren’t part of that family. They’re more strangers than the tourists. It makes them feel provincial. If you put a kid down enough, he gets discouraged.” (LEFT: ADAM DE BOER AND MERA RUBELL)

The Rubells’ collection shares many of the artists who grace the East Wing of the National Gallery. But Mera Rubell’s sympathies lay with the artists working to build a scene from hidden warehouses. When the Rubells decided to buy the Capitol Skyline Hotel, located in an area of town that has only just begun to gentrify, her friends expressed their doubts. “Wrong side of the tracks?” she sniffed. “That’s the only side of the tracks.”