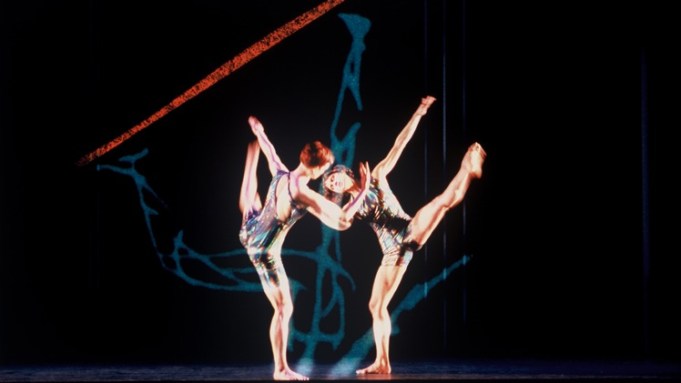 In a diary entry written in April 2000 (published in Other Animals, a book of drawings and journals), choreographer Merce Cunningham considered the scheduling of two dances (“Summerspace,” 1958, and “Interscape,” 2000) to be performed together at the Kennedy Space Center a day later. Skeptical of the juxtaposition of two pieces created 42 years apart, Cunningham asked of himself, and of his development: “Will they look that way? Am I growing old with wisdom or just foolishness?” He was 81 years old at the time. Surviving New York School Expressionism, Minimalism, Pop and every important other artistic movement made in the Twentieth Century. The choreographer’s often difficult, always experimental investigations of human movement, answered his own question.

Cunningham passed away at his home on Sunday night at the age of 90. Born in 1919 in Centralia, Washington, he had been for almost three-quarters of a centiry, a modern master of dance in America and internationally. Cunningham began his formal career in dance in the late ‘30s, studying at the Cornish School in Seattle under Bonnie Bird. It was there he met composer John Cage, the school’s chief accompanist and musical director. The two formed a long personal and creative union that would push each man’s practice toward works that tested the conventional realms of music and dance, in both an art and music context. Cage created scores that threw the tenets of classical composition out the window in favor of Minimalist pieces that embraced dissonance. Cunningham’s choreography took this dissonance as fact; he asked the human body to react to Cage’s scores on its own terms, without the crutches of narration, strictly interpreted male/female roles, or naturalistic set design.

Prior to forming his own dance company, Cunningham spent five years as a soloist in the Martha Graham Dance Company, alongside Erick Hawkins. Concurrently, in 1943, Cunningham began to perform with Cage around the country in collaborative dance and music performances. In 1953, as a teacher-in-residence at Black Mountain College, Cunningham formed the Merce Cunningham Dance Company, with dancers including Paul Taylor and Viola Farber. It was also at Black Mountain that Cunningham met the artist Robert Rauschenberg, who would become another long-term collaborator, and serve as the company’s resident designer from 1954 to 1964.

Cage and Rauschenberg remained Cunningham’s collaborators until their passings in 1992 and 2008, respectively. Cunningham also found younger collaborators in all realms of avant-garde practice, from designer Rei Kawakubo to experimental rock band Sonic Youth. This forward-looking momentum remains even now, according to a statement made by Judith Fishman, the Chairman of the Cunningham Dance Foundation, an organization devoted to sustaining and furthering Cunningham’s studio, repertory, company, archives and educational outreach:

We have lost a great man and a great artist, but we celebrate his extraordinary life, his art, and the dancers and the artists with whom he worked. To honor Merce, we plan to carry on our efforts to share and preserve his legacy, so that audiences of today and generations of tomorrow may witness the work of this legendary artist.