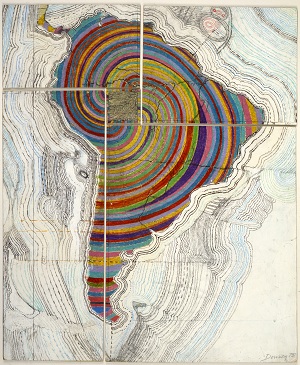 Patrick Charpenel is the director of the Museo Jumex, Mexico City. Here, he recalls his favorite exhibitions from that city during the past year.

“ASCO: Elite of the Obscure, a Retrospective, 1972-1987” at MUAC, University Museum of Contemporary Art, Autonomous University of Mexico
The ASCO collective (Harry Gamboa Jr., Gronk, Willie Herrón III and Patssi Valdez) were a radical and experimental artist group constituted of artists of Hispanic origin that generated public art projects in Los Angeles in the 1970 and ’80s. This survey exhibition, organized by the Los Angeles County Museum of Art, was a compelling presentation of their work in performance art, public art and multimedia projects.

“Olinka, or Where Movement is Created” at the Tamayo Museum
This group exhibition featured works by artists ranging from the 20th-century painter and writer Gerardo Murillo (who signed his works as Dr. Atl) to contemporary practitioners like Thea Djordjadze, Paulina Olowska and Danh Vo. Taking as a starting point an investigation of Nahui Olin (María del Carmen Mondragón Valseca, 1893-1978), the Mexican artist’s model, painter and poet, guest curator Adam Szymczyk developed an exhibition which, considering all the mythology surrounding this extraordinary woman, produced a fictional narrative inspired by a historical figure.

“ggaabbrriieell ssiieerraa” at Kurimanzutto
Colombian-born, Bogotá-based artist Gabriel Sierra explored the possibilities of space and architecture. In installations and sculpture, the artist generated functional tools that were incorporated into the gallery’s architectural structure.

Juan José Gurrola at House of Gaga
This show revived a multifaceted character, Juan José Gurrola (1935-2007), who worked in numerous disciplines, including painting, drawing, sculpture, performance and video as well as teaching. With a particular zeal for wide-ranging appropriation, Gurrola created highly personal artworks that are strongly charged with humor and criticism directed at the artistic and social structures operating in the art world during the 1970s and ’80s.

“Juan Downey: A Communications Utopia” at the Tamayo Museum
Curated by Julieta González, this retrospective of the Chilean artist Juan Downey (1940-1993), which traveled to the Tamayo Museum after appearing at the Arizona State University Museum, MIT’s List Visual Arts Center and the Bronx Museum of the Arts (the latter two institutions co-organized the exhibition), was very important to me. Downey was one of the most interesting politically minded Latin American artists of his day.