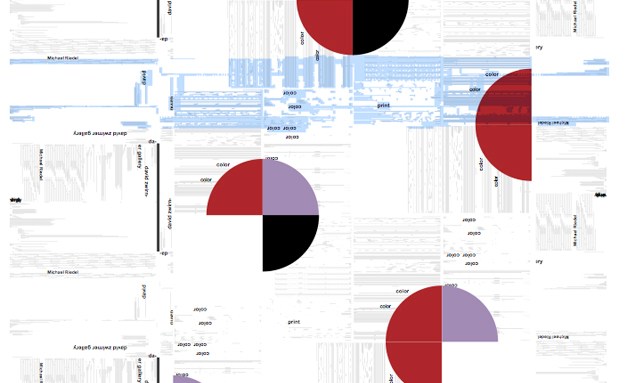 Like the riddle about a tree falling in the woods, German mixed-media artist Michael Riedel wonders, if an exhibition doesn’t generate printed material, can it live on? Riedel insists that the proof is in the ephemera.

Since the late ’90s, Riedel, who is based in Frankfurt, has published books, magazines, catalogues, brochures, posters and postcards. He’s also known for re-staging concerts, club nights, readings and screenings—literally “duplicating” a cultural event days or weeks after the original first happened.

On Feb. 17, Riedel’s third show opens at David Zwirner gallery. At 38, he is among the gallery’s youngest artists. The title—”The quick brown fox jumps over the lazy dog”—has been used historically to practice handwriting or typesetting, because it famously contains every letter of the alphabet at least once.

“The quick brown fox…” is the third iteration of an ongoing project. It uses texts culled from a chosen venue’s website (previously, Kunstverein Hamburg and Galerie Michel Rein in Paris) as the source material for the work in that location’s exhibition. At Zwirner, the walls will be papered, floor to ceiling, with a smattering of words copied from the gallery’s website. 22 large canvases, screenprinted with text from various websites that mention Riedel’s work (his artist’s page on MoMA’s site, for example), will hang on the papered walls.

Many early performances took place at Oskar-von-Miller Strasse 16, an abandoned building in Frankfurt that Riedel and artist Dennis Loesch turned into an alternative space. There the artists re-created a nightclub and screened movies made by sneaking a video camera into local cinemas. When Oskar-von-Miller Strasse 16 was torn down in 2006, a year after Riedel moved away, he and Loesch temporarily “re-created” the venue in Berlin, where they hosted similar events. Recordings and photographs of these and other re-staged events have been integrated into later works, some of which were collected in “Filmed Film,” Riedel’s 2008 show at David Zwirner in New York.

Riedel has long used extant texts as material for his projects. For Frieze (CMYK) (2007) he reprinted the May 2007 issue of the titular art magazine in each of four standard printing colors (cyan, magenta, yellow and black). The four reproductions became limited-edition artist books, and were exhibited with related postcards and posters. Audio book (Meckert) (2010) is a recording of a text printed in another one of Riedel’s artist books, with every word rearranged alphabetically and spit back out in a computerized robot voice. “Text and image are the same to me,” he explained during a lecture at Zwirner on Feb. 2, “because both are made with a recording machine.”

Riedel has been called a “photocopy machine,” referring to the way the artist incorporates disjointed text fragments into wallpaper, canvases, catalogues and postcards. Reproducing words, links and commands might not sound visually engaging, but Riedel scatters his otherwise black and white canvases with colored full and half circles. The end result looks more like a star chart than a “photocopy” of a website.

Each of Riedel’s installations produces yet another layer of material both printed and conceptual, which are, eventually, used as the foundation for the next project. It’s a never-ending cycle; as long as Riedel keeps making art, he won’t run out of ideas.